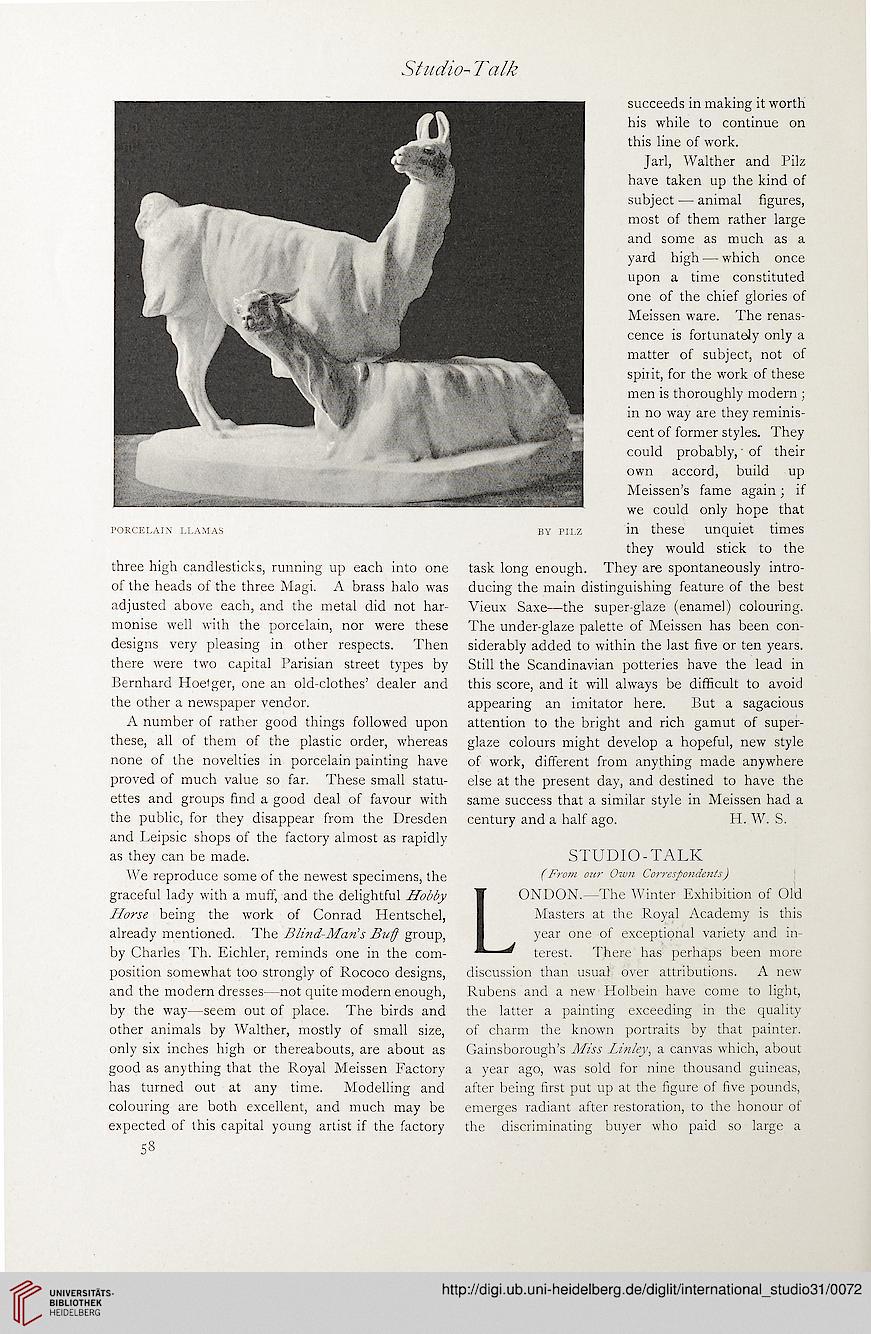 
PORCELAIN LLAMAS
three high candlesticks, running up each into one
of the heads of the three Magi. A brass halo was
adjusted above each, and the metal did not har-
monise well with the porcelain, nor were these
designs very pleasing in other respects. Then
there were two capital Parisian street types by
Bernhard Hoeiger, one an old-clothes’ dealer and
the other a newspaper vendor.
A number of rather good things followed upon
these, all of them of the plastic order, whereas
none of the novelties in porcelain painting have
proved of much value so far. These small statu-
ettes and groups find a good deal of favour with
the public, for they disappear from the Dresden
and Leipsic shops of the factory almost as rapidly
as they can be made.
We reproduce some of the newest specimens, the
graceful lady with a muff, and the delightful Hobby
Horse being the work of Conrad Hentschel,
already mentioned. The Blind-Man's Buff group,
by Charles Th. Eichler, reminds one in the com-
position somewhat too strongly of Rococo designs,
and the modern dresses—not quite modern enough,
by the way—seem out of place. The birds and
other animals by Walther, mostly of small size,
only six inches high or thereabouts, are about as
good as anything that the Royal Meissen Factory
has turned out at any time. Modelling and
colouring are both excellent, and much may be
expected of this capital young artist if the factory
58

succeeds in making it worth
his while to continue on
this line of work.
Jarl, Walther and Pilz
have taken up the kind of
subject — animal figures,
most of them rather large
and some as much as a
yard high —- which once
upon a time constituted
one of the chief glories of
Meissen ware. The renas-
cence is fortunately only a
matter of subject, not of
spirit, for the work of these
men is thoroughly modern ;
in no way are they reminis-
cent of former styles. They
could probably, of their
own accord, build up
Meissen’s fame again; if
we could only hope that
by pilz in these unquiet times
they would stick to the
task long enough. They are spontaneously intro-
ducing the main distinguishing feature of the best
Vieux Saxe—the super-glaze (enamel) colouring.
The under-glaze palette of Meissen has been con-
siderably added to within the last five or ten years.
Still the Scandinavian potteries have the lead in
this score, and it will always be difficult to avoid
appearing an imitator here. But a sagacious
attention to the bright and rich gamut of super-
glaze colours might develop a hopeful, new style
of work, different from anything made anywhere
else at the present day, and destined to have the
same success that a similar style in Meissen had a
century and a half ago. H. W. S.
STUDIO-TALK
(From our Own Correspondents)
ONDON.—The Winter Exhibition of Old
Masters at the Royal Academy is this
year one of exceptional variety and in-
terest. There has perhaps been more
discussion than usual over attributions. A new
Rubens and a new Holbein have come to light,
the latter a painting exceeding in the quality
of charm the known portraits by that painter.
Gainsborough’s Miss Linley, a canvas which, about
a year ago, was sold for nine thousand guineas,
after being first put up at the figure of five pounds,
emerges radiant after restoration, to the honour of
the discriminating buyer who paid so large a