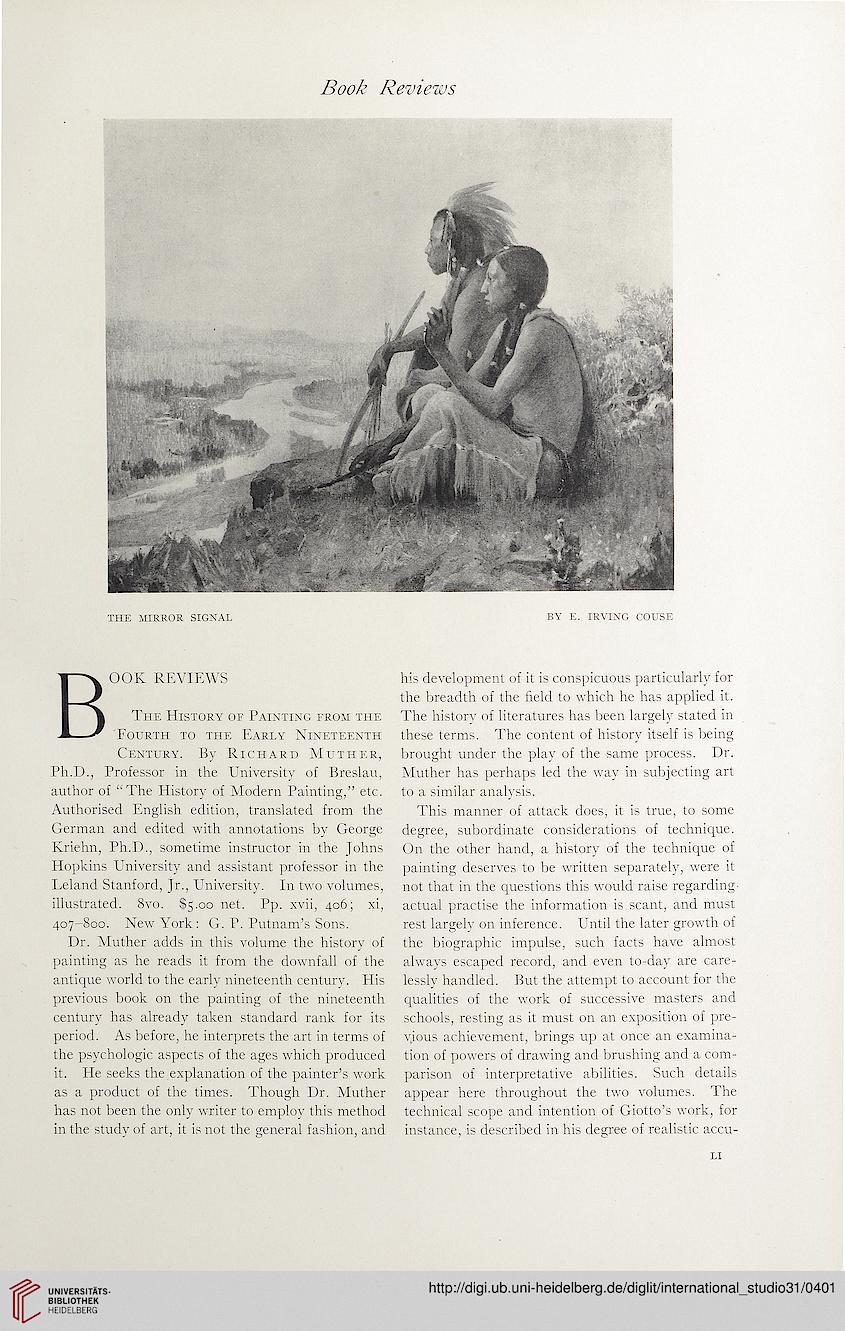 
Book reviews
The History of Painting from the
Fourth to the Early Nineteenth
Century. By Richard Muther,
Ph.D., Professor in the University of Breslau,
author of “The History of Modern Painting,” etc.
Authorised English edition, translated from the
German and edited with annotations by George
Kriehn, Ph.D., sometime instructor in the Johns
Hopkins University and assistant professor in the
Leland Stanford, Jr., University. In two volumes,
illustrated. 8vo. $5.00 net. Pp. xvii, 406; xi,
407-800. New York: G. P. Putnam’s Sons.
Dr. Muther adds in this volume the history of
painting as he reads it from the downfall of the
antique world to the early nineteenth century. His
previous book on the painting of the nineteenth
century has already taken standard rank for its
period. As before, he interprets the art in terms of
the psychologic aspects of the ages which produced
it. He seeks the explanation of the painter’s work
as a product of the times. Though Dr. Muther
has not been the only writer to employ this method
in the study of art, it is not the general fashion, and

his development of it is conspicuous particularly for
the breadth of the field to which he has applied it.
The history of literatures has been largely stated in
these terms. The content of history itself is being
brought under the play of the same process. Dr.
Muther has perhaps led the way in subjecting art
to a similar analysis.
This manner of attack does, it is true, to some
degree, subordinate considerations of technique.
On the other hand, a history of the technique of
painting deserves to be written separately, were it
not that in the questions this would raise regarding-
actual practise the information is scant, and must
rest largely on inference. Until the later growth of
the biographic impulse, such facts have almost
always escaped record, and even to-day are care-
lessly handled. But the attempt to account for the
qualities of the work of successive masters and
schools, resting as it must on an exposition of pre-
vious achievement, brings up at once an examina-
tion of powers of drawing and brushing and a com-
parison of interpretative abilities. Such details
appear here throughout the two volumes. The
technical scope and intention of Giotto’s work, for
instance, is described in his degree of realistic accu-