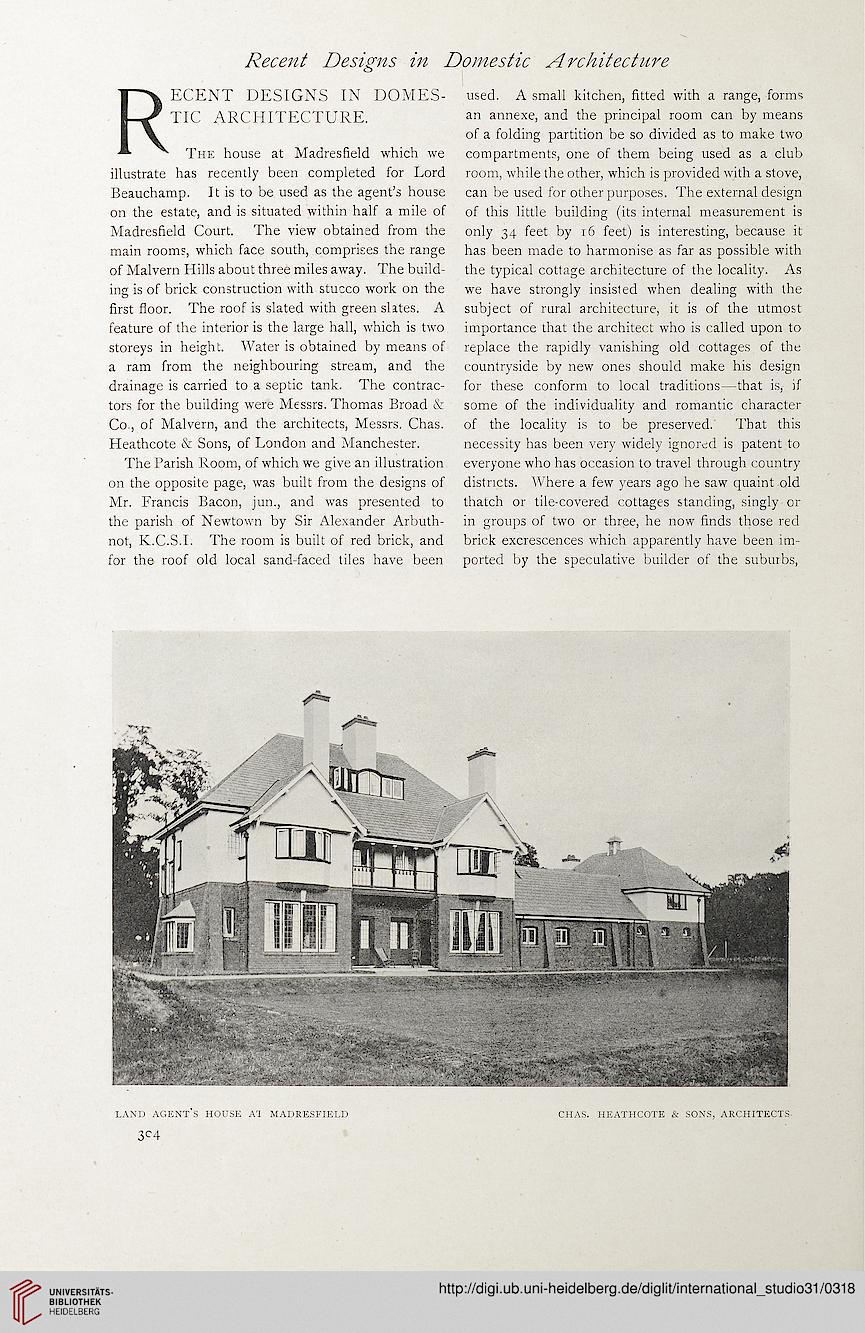 The house at Madresfield which we
illustrate has recently been completed for Lord
Beauchamp. It is to be used as the agent’s house
on the estate, and is situated within half a mile of
Madresfield Court. The view obtained from the
main rooms, which face south, comprises the range
of Malvern Hills about three miles away. The build-
ing is of brick construction with stucco work on the
first floor. The roof is slated with green slates. A
feature of the interior is the large hall, which is two
storeys in height. Water is obtained by means of
a ram from the neighbouring stream, and the
drainage is carried to a septic tank. The contrac-
tors for the building were Messrs. Thomas Broad &
Co., of Malvern, and the architects, Messrs. Chas.
Heathcote & Sons, of London and Manchester.
The Parish Room, of which we give an illustration
on the opposite page, was built from the designs of
Mr. Francis Bacon, jun., and was presented to
the parish of Newtown by Sir Alexander Arbuth-
not, K.C.S.I. The room is built of red brick, and
for the roof old local sand-faced tiles have been

used. A small kitchen, fitted with a range, forms
an annexe, and the principal room can by means
of a folding partition be so divided as to make two
compartments, one of them being used as a club
room, while the other, which is provided with a stove,
can be used for other purposes. The external design
of this little building (its internal measurement is
only 34 feet by 16 feet) is interesting, because it
has been made to harmonise as far as possible with
the typical cottage architecture of the locality. As
we have strongly insisted when dealing with the
subject of rural architecture, it is of the utmost
importance that the architect who is called upon to
replace the rapidly vanishing old cottages of the
countryside by new ones should make his design
for these conform to local traditions—that is, if
some of the individuality and romantic character
of the locality is to be preserved. That this
necessity has been very widely ignored is patent to
everyone who has occasion to travel through country
districts. Where a few years ago he saw quaint old
thatch or tile-covered cottages standing, singly or
in groups of two or three, he now finds those red
brick excrescences which apparently have been im-
ported by the speculative builder of the suburbs,