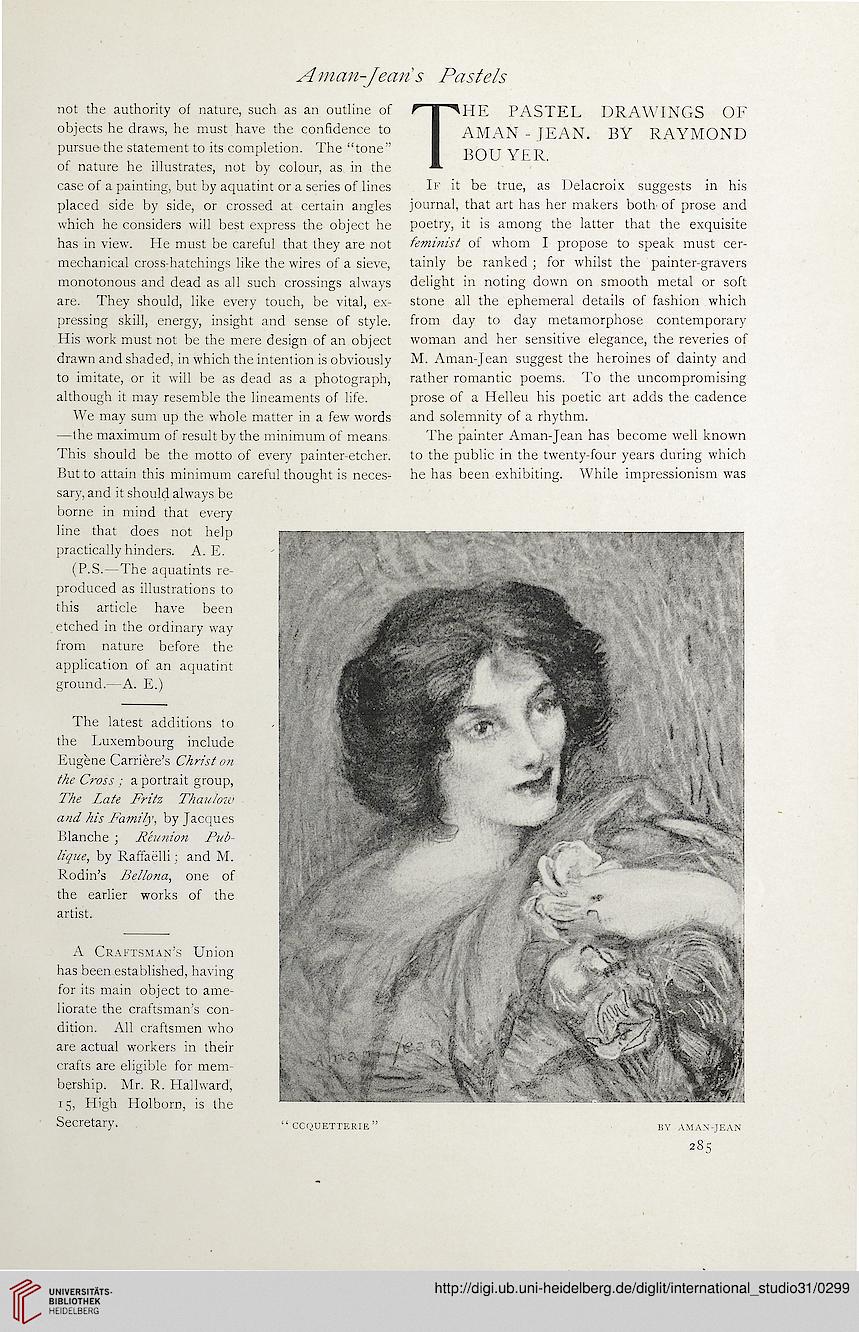 The latest additions to
the Luxembourg include
Eugene Carriere’s Christ on
the Cross / a portrait group,
The Late Fritz Thaulow
and his Family, by Jacques
Blanche ; Reunion Pub-
lique, by Raffaelli ; and M.
Rodin’s Bellona, one of
the earlier works of the
artist.

A Craftsman’s Union
has been established, having
for its main object to ame-
liorate the craftsman’s con-
dition. All craftsmen who
are actual workers in their
crafts are eligible for mem-
bership. Mr. R. Hallward,
15, High Holborn, is the
Secretary.

not the authority of nature, such as an outline of
objects he draws, he must have the confidence to
pursue the statement to its completion. The “tone”
of nature he illustrates, not by colour, as in the
case of a painting, but by aquatint or a series of lines
placed side by side, or crossed at certain angles
which he considers will best express the object he
has in view. He must be careful that they are not
mechanical cross-hatchings like the wires of a sieve,
monotonous and dead as all such crossings always
are. They should, like every touch, be vital, ex-
pressing skill, energy, insight and sense of style.
His work must not be the mere design of an object
drawn and shaded, in which the intention is obviously
to imitate, or it will be as dead as a photograph,
although it may resemble the lineaments of life.
We may sum up the whole matter in a few words
—the maximum of result by the minimum of means.
This should be the motto of every painter-etcher.
But to attain this minimum careful thought is neces-
sary, and it should always be
borne in mind that every
line that does not help
practically hinders. A. E.
(P.S.—The aquatints re-
produced as illustrations to
this article have been
etched in the ordinary way
from nature before the
application of an aquatint
ground.—A. E.)

The pastel drawings of
AM AN - JEAN. BY RAYMOND
BOUYER.
If it be true, as Delacroix suggests in his
journal, that art has her makers both of prose and
poetry, it is among the latter that the exquisite
feminist of whom I propose to speak must cer-
tainly be ranked ; for whilst the painter-gravers
delight in noting down on smooth metal or soft
stone all the ephemeral details of fashion which
from day to day metamorphose contemporary
woman and her sensitive elegance, the reveries of
M. Aman-Jean suggest the heroines of dainty and
rather romantic poems. To the uncompromising
prose of a Helleu his poetic art adds the cadence
and solemnity of a rhythm.
The painter Aman-Jean has become well known
to the public in the twenty-four years during which
he has been exhibiting. While impressionism was