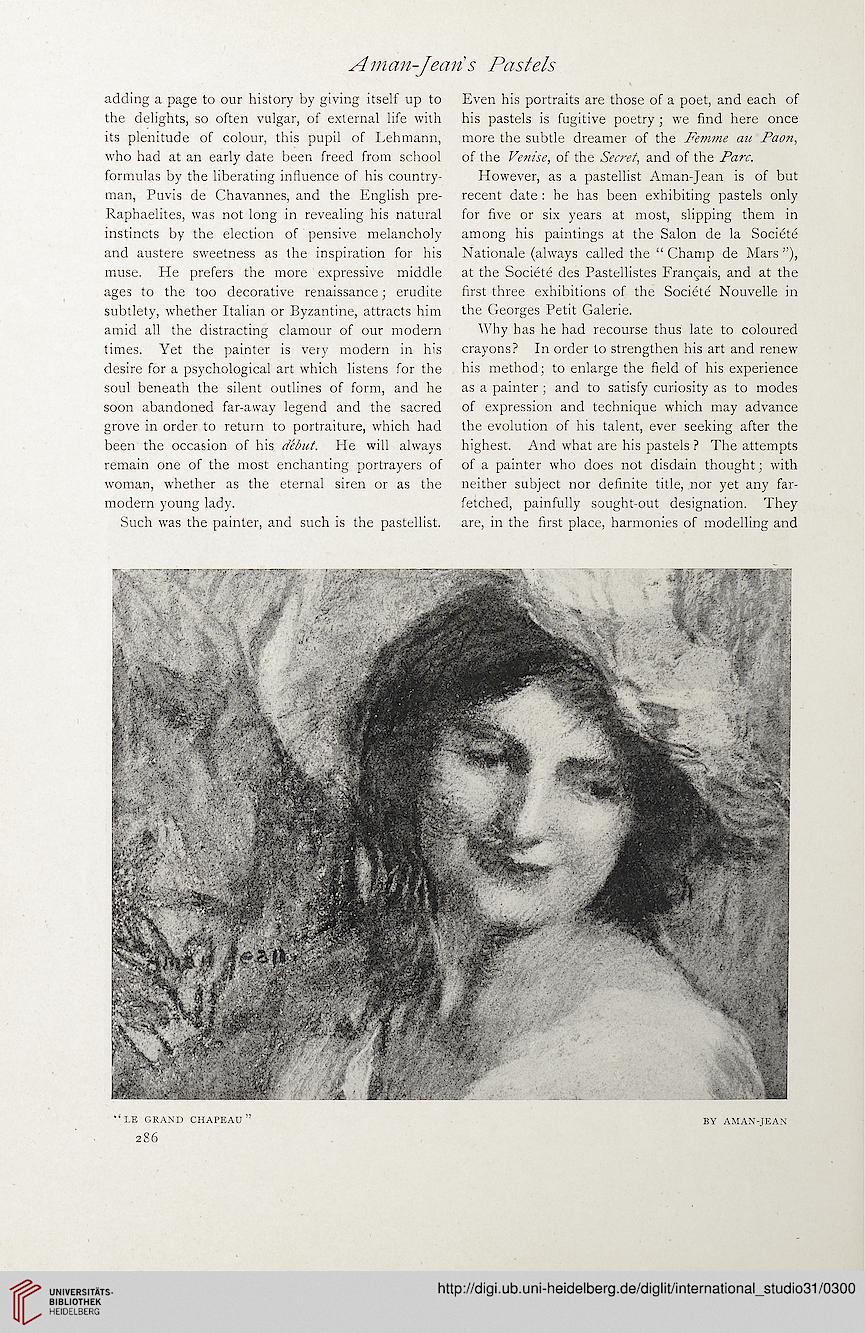 adding a page to our history by giving itself up to
the delights, so often vulgar, of external life with
its plenitude of colour, this pupil of Lehmann,
who had at an early date been freed from school
formulas by the liberating influence of his country-
man, Puvis de Chavannes, and the English pre-
Raphaelites, was not long in revealing his natural
instincts by the election of pensive melancholy
and austere sweetness as the inspiration for his
muse. He prefers the more expressive middle
ages to the too decorative renaissance; erudite
subtlety, whether Italian or Byzantine, attracts him
amid all the distracting clamour of our modern
times. Yet the painter is very modern in his
desire for a psychological art which listens for the
soul beneath the silent outlines of form, and he
soon abandoned far-away legend and the sacred
grove in order to return to portraiture, which had
been the occasion of his debut. He will always
remain one of the most enchanting portrayers of
woman, whether as the eternal siren or as the
modern young lady.
Such wras the painter, and such is the pastellist.

Even his portraits are those of a poet, and each of
his pastels is fugitive poetry ; we find here once
more the subtle dreamer of the Femme au Paon,
of the Venise, of the Secret, and of the Parc.
However, as a pastellist Aman-Jean is of but
recent date : he has been exhibiting pastels only
for five or six years at most, slipping them in
among his paintings at the Salon de la Societe
Nationale (always called the “ Champ de Mars ”),
at the Societe des Pastellistes Franpais, and at the
first three exhibitions of the Societe Nouvelle in
the Georges Petit Galerie.
Why has he had recourse thus late to coloured
crayons? In order to strengthen his art and renew
his method; to enlarge the field of his experience
as a painter ; and to satisfy curiosity as to modes
of expression and technique which may advance
the evolution of his talent, ever seeking after the
highest. And what are his pastels ? The attempts
of a painter who does not disdain thought; with
neither subject nor definite title, nor yet any far-
fetched, painfully sought-out designation. They
are, in the first place, harmonies of modelling and