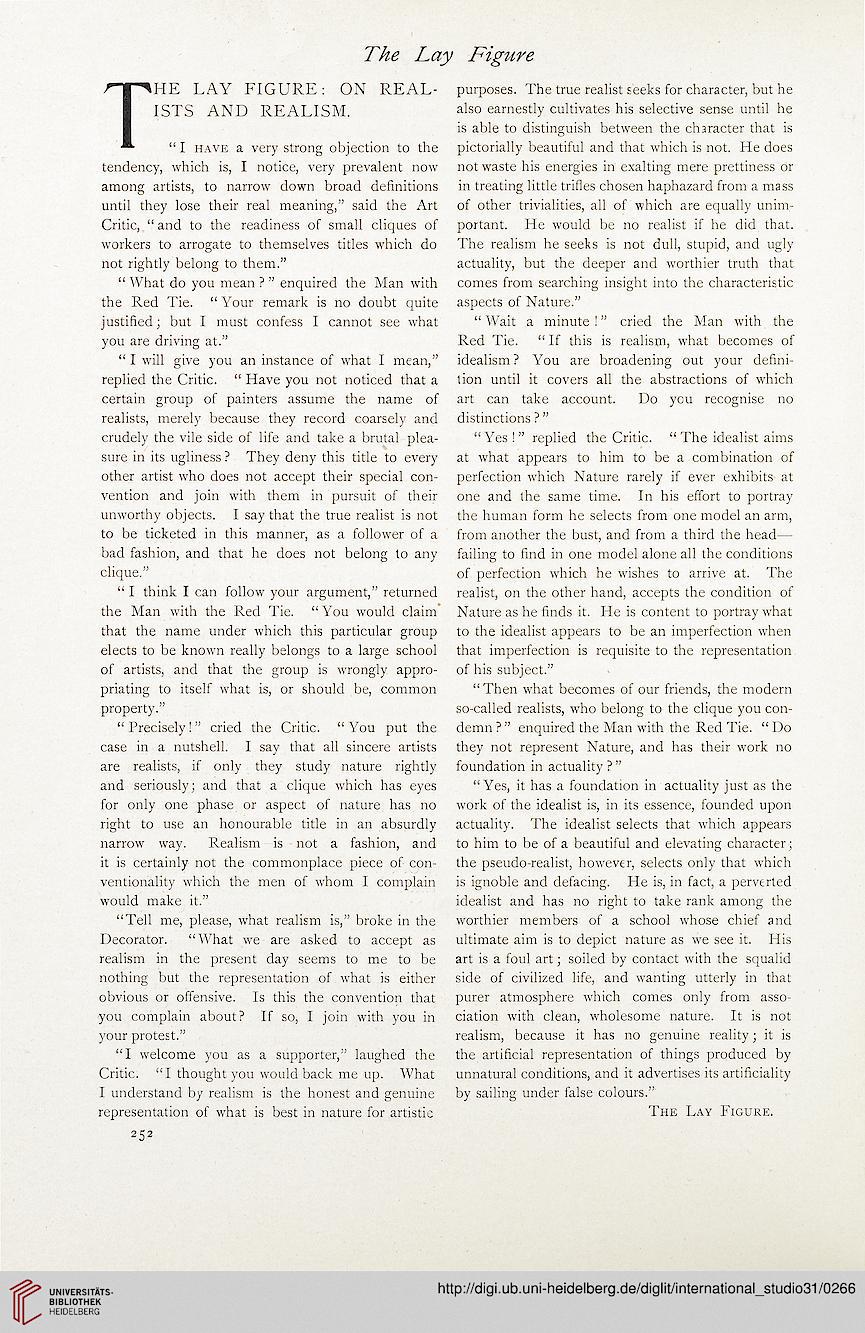 HE LAY FIGURE: ON REAL-
ISTS AND REALISM.

“I have a very strong objection to the
tendency, which is, I notice, very prevalent now
among artists, to narrow down broad definitions
until they lose their real meaning,” said the Art
Critic, “ and to the readiness of small cliques of
workers to arrogate to themselves titles which do
not rightly belong to them.”
“ What do you mean ? ” enquired the Man with
the Red Tie. “ Your remark is no doubt quite
justified; but I must confess I cannot see what
you are driving at.”
“ I will give you an instance of what I mean,”
replied the Critic. “ Have you not noticed that a
certain group of painters assume the name of
realists, merely because they record coarsely and
crudely the vile side of life and take a brutal plea-
sure in its ugliness ? They deny this title to every
other artist who does not accept their special con-
vention and join with them in pursuit of their
unworthy objects. I say that the true realist is not
to be ticketed in this manner, as a follower of a
bad fashion, and that he does not belong to any
clique.”
“ I think I can follow your argument,” returned
the Man with the Red Tie. “You would claim
that the name under which this particular group
elects to be known really belongs to a large school
of artists, and that the group is wrongly appro-
priating to itself what is, or should be, common
property.”
“Precisely!” cried the Critic. “You put the
case in a nutshell. I say that all sincere artists
are realists, if only they study nature rightly
and seriously; and that a clique which has eyes
for only one phase or aspect of nature has no
right to use an honourable title in an absurdly
narrow way. Realism is not a fashion, and
it is certainly not the commonplace piece of con-
ventionality which the men of whom I complain
would make it.”
“Tell me, please, what realism is,” broke in the
Decorator. “What we are asked to accept as
realism in the present day seems to me to be
nothing but the representation of what is either
obvious or offensive. Is this the convention that
you complain about? If so, I join with you in
your protest.”
“I welcome you as a supporter,” laughed the
Critic. “I thought you would back me up. What
I understand by realism is the honest and genuine
representation of what is best in nature for artistic
252

purposes. The true realist seeks for character, but he
also earnestly cultivates his selective sense until he
is able to distinguish between the character that is
pictorially beautiful and that which is not. He does
not waste his energies in exalting mere prettiness or
in treating little trifles chosen haphazard from a mass
of other trivialities, all of which are equally unim-
portant. He would be no realist if he did that.
The realism he seeks is not dull, stupid, and ugly
actuality, but the deeper and worthier truth that
comes from searching insight into the characteristic
aspects of Nature.”
“ Wait a minute ! ” cried the Man with the
Red Tie. “ If this is realism, what becomes of
idealism ? You are broadening out your defini-
tion until it covers all the abstractions of which
art can take account. Do you recognise no
distinctions ? ”
“Yes !” replied the Critic. “The idealist aims
at what appears to him to be a combination of
perfection which Nature rarely if ever exhibits at
one and the same time. In his effort to portray
the human form he selects from one model an arm,
from another the bust, and from a third the head—
failing to find in one model alone all the conditions
of perfection vrhich he washes to arrive at. The
realist, on the other hand, accepts the condition of
Nature as he finds it. He is content to portray what
to the idealist appears to be an imperfection when
that imperfection is requisite to the representation
of his subject.”
“Then what becomes of our friends, the modern
so-called realists, who belong to the clique you con-
demn ? ” enquired the Man with the Red Tie. “ Do
they not represent Nature, and has their work no
foundation in actuality ? ”
“Yes, it has a foundation in actuality just as the
work of the idealist is, in its essence, founded upon
actuality. The idealist selects that which appears
to him to be of a beautiful and elevating character;
the pseudo-realist, however, selects only that which
is ignoble and defacing. He is, in fact, a perverted
idealist and has no right to take rank among the
worthier members of a school whose chief and
ultimate aim is to depict nature as wre see it. His
art is a foul art; soiled by contact with the squalid
side of civilized life, and wanting utterly in that
purer atmosphere which comes only from asso-
ciation with clean, wholesome nature. It is not
realism, because it has no genuine reality; it is
the artificial representation of things produced by
unnatural conditions, and it advertises its artificiality
by sailing under false colours.”'
The Lay Figure.