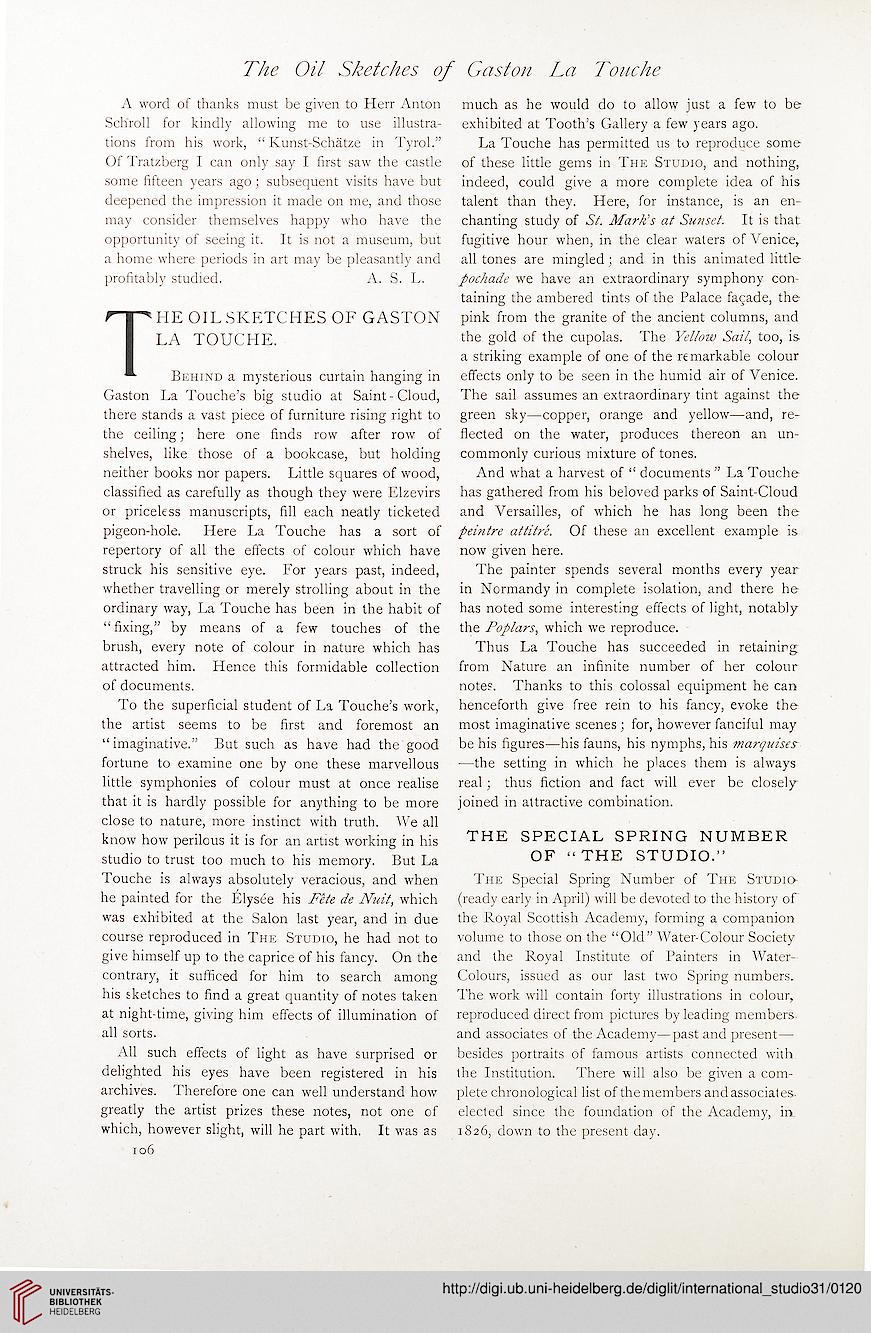 A word of thanks must be given to Herr Anton
Schroll for kindly allowing me to use illustra-
tions from his work, “ Kunst-Schatze in Tyrol.”
Of Tratzberg I can only say I first saw the castle
some fifteen years ago; subsequent visits have but
deepened the impression it made on me, and those
may consider themselves happy who have the
opportunity of seeing it. It is not a museum, but
a home where periods in art may be pleasantly and
profitably studied. A. S. L.
HE OIL SKETCHES OF GASTON
LA TOUCHE.
Behind a mysterious curtain hanging in
Gaston La Touche’s big studio at Saint-Cloud,
there stands a vast piece of furniture rising right to
the ceiling; here one finds row after row of
shelves, like those of a bookcase, but holding
neither books nor papers. Little squares of wood,
classified as carefully as though they were Elzevirs
or priceless manuscripts, fill each neatly ticketed
pigeon-hole. Here La Touche has a sort of
repertory of all the effects of colour which have
struck his sensitive eye. For years past, indeed,
whether travelling or merely strolling about in the
ordinary way, La Touche has been in the habit of
“fixing,” by means of a few touches of the
brush, every note of colour in nature which has
attracted him. Hence this formidable collection
of documents.
To the superficial student of La Touche’s work,
the artist seems to be first and foremost an
“imaginative.” But such as have had the good
fortune to examine one by one these marvellous
little symphonies of colour must at once realise
that it is hardly possible for anything to be more
close to nature, more instinct with truth. We all
know how perilous it is for an artist working in his
studio to trust too much to his memory. But La
Touche is always absolutely veracious, and when
he painted for the Elysee his Fete de Nuit, which
was exhibited at the Salon last year, and in due
course reproduced in The Studio, he had not to
give himself up to the caprice of his fancy. On the
contrary, it sufficed for him to search among
his sketches to find a great quantity of notes taken
at night-time, giving him effects of illumination of
all sorts.
All such effects of light as have surprised or
delighted his eyes have been registered in his
archives. Therefore one can well understand how
greatly the artist prizes these notes, not one of
which, however slight, will he part with. It was as
106

much as he would do to allow just a few to be
exhibited at Tooth’s Gallery a few years ago.
La Touche has permitted us to reproduce some
of these little gems in The Studio, and nothing,
indeed, could give a more complete idea of his
talent than they. Here, for instance, is an en-
chanting study of St. Mark’s at Sunset. It is that
fugitive hour when, in the clear waters of Venice,
all tones are mingled; and in this animated little
pochade we have an extraordinary symphony con-
taining the ambered tints of the Palace faqade, the
pink from the granite of the ancient columns, and
the gold of the cupolas. The Yellow Sail, too, is
a striking example of one of the remarkable colour
effects only to be seen in the humid air of Venice.
The sail assumes an extraordinary tint against the
green sky—copper, orange and yellow—and, re-
flected on the water, produces thereon an un-
commonly curious mixture of tones.
And what a harvest of “ documents ” La Touche
has gathered from his beloved parks of Saint-Cloud
and Versailles, of which he has long been the
peintre attitre. Of these an excellent example is
now given here.
The painter spends several months every year
in Normandy in complete isolation, and there he
has noted some interesting effects of light, notably
the Poplars, which we reproduce.
Thus La Touche has succeeded in retaining
from Nature an infinite number of her colour
notes. Thanks to this colossal equipment he can
henceforth give free rein to his fancy, evoke the-
most imaginative scenes ; for, however fanciful may
be his figures—his fauns, his nymphs, his marquises
—the setting in which he places them is always
real; thus fiction and fact will ever be closely
joined in attractive combination.
THE SPECIAL SPRING NUMBER
OF “ THE STUDIO.”
The Special Spring Number of The Studio
(ready early in April) will be devoted to the history of
the Royal Scottish Academy, forming a companion
volume to those on the “Old” Water-Colour Society
and the Royal Institute of Painters in Water-
Colours, issued as our last two Spring numbers.
The work will contain forty illustrations in colour,
reproduced direct from pictures by leading members,
and associates of the Academy—past and present—
besides portraits of famous artists connected with
the Institution. There will also be given a com-
plete chronological list of the members and associates,
elected since the foundation of the Academy, in.
1826, down to the present day.