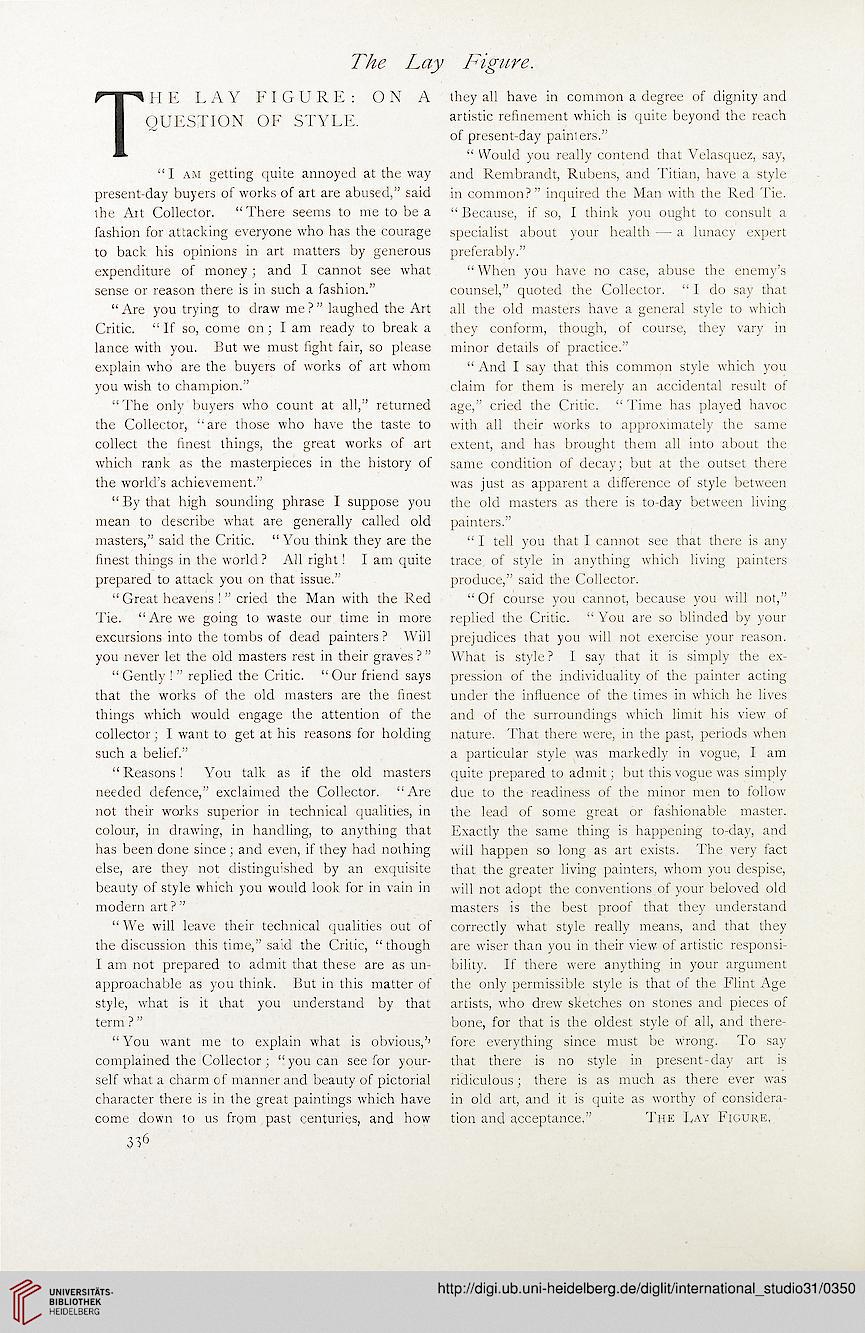 THE LAY FIGURE: ON A
QUESTION OF STYLE.
“I am getting quite annoyed at the way
present-day buyers of works of art are abused,” said
the Art Collector. “There seems to me to be a
fashion for attacking everyone who has the courage
to back his opinions in art matters by generous
expenditure of money; and I cannot see what
sense or reason there is in such a fashion.”
“Are you trying to draw me?” laughed the Art
Critic. “ If so, come on; I am ready to break a
lance with you. But we must fight fair, so please
explain who are the buyers of works of art whom
you wish to champion.”
“The only buyers who count at all,” returned
the Collector, “are those who have the taste to
collect the finest things, the great works of art
which rank as the masterpieces in the history of
the world’s achievement.”
“ By that high sounding phrase I suppose you
mean to describe what are generally called old
masters,” said the Critic. “You think they are the
finest things in the world? All right! I am quite
prepared to attack you on that issue.”
“ Great heavens ! ” cried the Man with the Red
Tie. “Are we going to waste our time in more
excursions into the tombs of dead painters? Will
you never let the old masters rest in their graves ? ”
“ Gently ! ” replied the Critic. “ Our friend says
that the works of the old masters are the finest
things which would engage the attention of the
collector; I want to get at his reasons for holding
such a belief.”
“ Reasons! You talk as if the old masters
needed defence,” exclaimed the Collector. “Are
not their works superior in technical qualities, in
colour, in drawing, in handling, to anything that
has been done since; and even, if they had nothing
else, are they not distingu'shed by an exquisite
beauty of style which you would look for in vain in
modern art ? ”
“We will leave their technical qualities out of
the discussion this time,” said the Critic, “though
I am not prepared to admit that these are as un-
approachable as you think. But in this matter of
style, what is it that you understand by that
term ? ”
“You want me to explain what is obvious,’’
complained the Collector; “you can see for your-
self what a charm of manner and beauty of pictorial
character there is in the great paintings which have
come down to us from past centuries, and how
336

they all have in common a degree of dignity and
artistic refinement which is quite beyond the reach
of present-day painlers.”
“ Would you really contend that Velasquez, say,
and Rembrandt, Rubens, and Titian, have a style
in common?” inquired the Man with the Red Tie.
“ Because, if so, I think you ought to consult a
specialist about your health — a lunacy expert
preferably.”
“ When you have no case, abuse the enemy’s
counsel,” quoted the Collector. “ I do say that
all the old masters have a general style to which
they conform, though, of course, they vary in
minor details of practice.”
“ And I say that this common style which you
claim for them is merely an accidental result of
age,” cried the Critic. “ Time has played havoc
with all their works to approximately the same
extent, and has brought them all into about the
same condition of decay; but at the outset there
was just as apparent a difference of style between
the old masters as there is to-day between living
painters.”
“ I tell you that I cannot see that there is any
trace of style in anything which living painters
produce,” said the Collector.
“Of course you cannot, because you will not,”
replied the Critic. “ You are so blinded by your
prejudices that you will not exercise your reason.
What is style ? I say that it is simply the ex-
pression of the individuality of the painter acting
under the influence of the times in which he lives
and of the surroundings which limit his view of
nature. That there were, in the past, periods when
a particular style was markedly in vogue, I am
quite prepared to admit; but this vogue was simply
due to the readiness of the minor men to follow
the lead of some great or fashionable master.
Exactly the same thing is happening to-day, and
will happen so long as art exists. The very fact
that the greater living painters, whom you despise,
will not adopt the conventions of your beloved old
masters is the best proof that they understand
correctly what style really means, and that they
are wiser than you in their view of artistic responsi-
bility. If there were anything in your argument
the only permissible style is that of the Flint Age
artists, who drew sketches on stones and pieces of
bone, for that is the oldest style of all, and there-
fore everything since must be wrong. To say
that there is no style in present-day art is
ridiculous; there is as much as there ever was
in old art, and it is quite as worthy of considera-
tion and acceptance,” The Lay Figure,