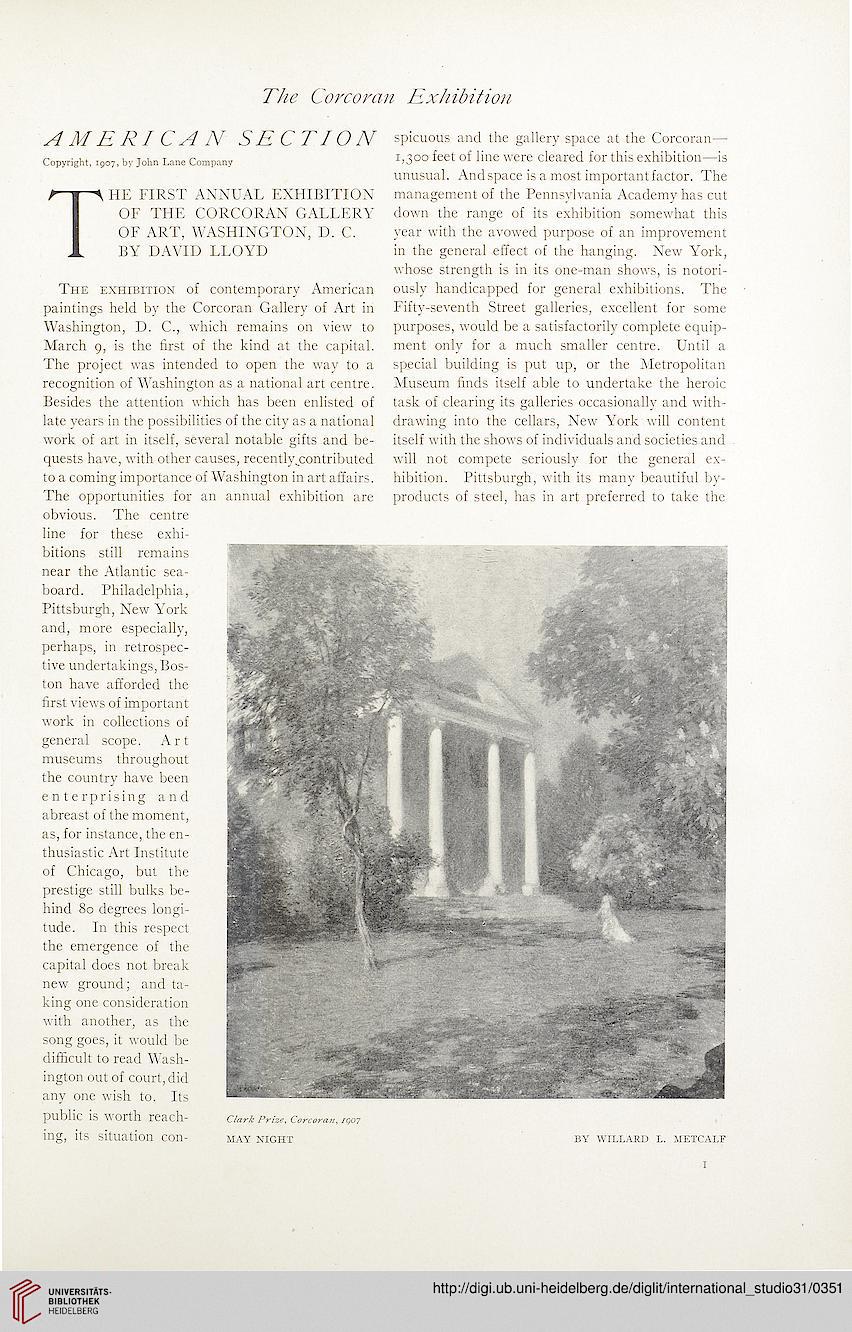 AMERICAN SECTION
Copyright, 1907, by John Lane Company
HE FIRST ANNUAL EXHIBITION
OF THE CORCORAN GALLERY
OF ART, WASHINGTON, D. C.
BY DAVID LLOYD
The exhibition of contemporary American
paintings held by the Corcoran Gallery of Art in
Washington, D. C., which remains on view to
March 9, is the first of the kind at the capital.
The project was intended to open the way to a
recognition of Washington as a national art centre.
Besides the attention which has been enlisted of
late years in the possibilities of the city as a national
work of art in itself, several notable gifts and be-
quests have, with other causes, recently^contributed
to a coming importance of Washington in art affairs.
The opportunities for an annual exhibition are
obvious. The centre
line for these exhi-
bitions still remains
near the Atlantic sea-
board. Philadelphia,
Pittsburgh, New York
and, more especially,
perhaps, in retrospec-
tive undertakings, Bos-
ton have afforded the
first views of important
work in collections of
general scope. Art
museums throughout
the country have been
enterprising and
abreast of the moment,
as, for instance, the en-
thusiastic Art Institute
of Chicago, but the
prestige still bulks be-
hind 80 degrees longi-
tude. In this respect
the emergence of the
capital does not break
new ground; and ta-
king one consideration
with another, as the
song goes, it would be
difficult to read Wash-
ington out of court, did
any one wish to. Its
public IS A\ Orth reach- Clark Prize, Corcoran, /907
ing, its situation con- may night

spicuous and the gallery space at the Corcoran—
1,300 feet of line were cleared for this exhibition—is
unusual. And space is a most important factor. The
management of the Pennsylvania Academy has cut
down the range of its exhibition somewhat this
year with the avowed purpose of an improvement
in the general effect of the hanging. New York,
whose strength is in its one-man shows, is notori-
ously handicapped for general exhibitions. The
Fifty-seventh Street galleries, excellent for some
purposes, would be a satisfactorily complete equip-
ment only for a much smaller centre. Until a
special building is put up, or the Metropolitan
Museum finds itself able to undertake the heroic
task of clearing its galleries occasionally and with-
drawing into the cellars, New York will content
itself with the shows of individuals and societies and
will not compete seriously for the general ex-
hibition. Pittsburgh, with its many beautiful by-
products of steel, has in art preferred to take the