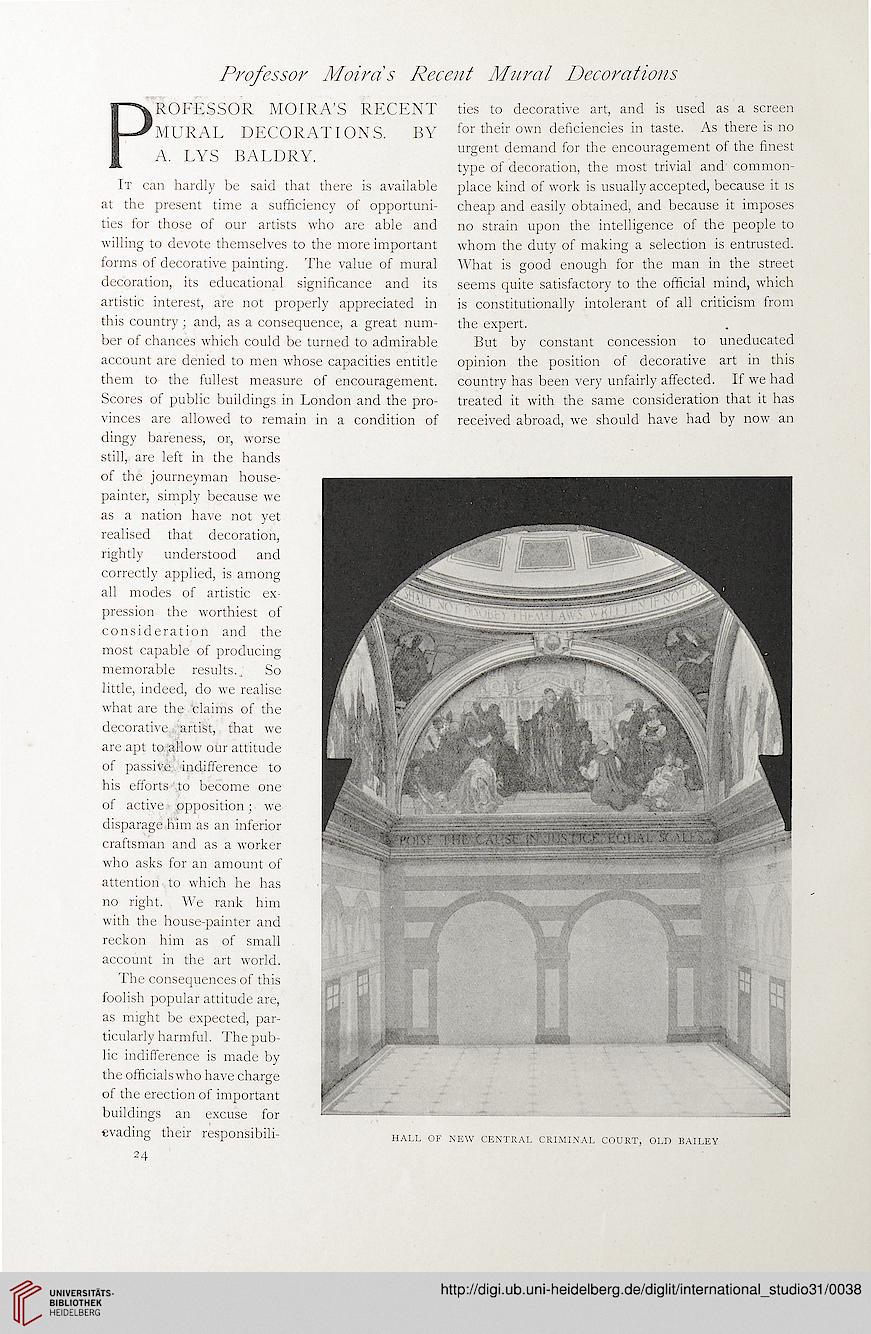 PROFESSOR MOIRA’S RECENT
MURAL DECORATIONS. BY
A. LYS BALDRY.
It can hardly be said that there is available
at the present time a sufficiency of opportuni-
ties for those of our artists who are able and
willing to devote themselves to the more important
forms of decorative painting. The value of mural
decoration, its educational significance and its
artistic interest, are not properly appreciated in
this country; and, as a consequence, a great num-
ber of chances which could be turned to admirable
account are denied to men whose capacities entitle
them to the fullest measure of encouragement.
Scores of public buildings in London and the pro-
vinces are allowed to remain in a condition of
dingy bareness, or, worse
still, are left in the hands
of the journeyman house-
painter, simply because we
as a nation have not yet
realised that decoration,
rightly understood and
correctly applied, is among
all modes of artistic ex-
pression the worthiest of
consideration and the
most capable of producing
memorable results. ^ So
little, indeed, do we realise
what are the claims of the
decorative artist, that we
are apt to allow our attitude
of passive indifference to
his efforts to become one
of active opposition; we
disparage him as an inferior
craftsman and as a worker
who asks for an amount of
attention to which he has
no right. We rank him
with the house-painter and
reckon him as of small
account in the art world.
The consequences of this
foolish popular attitude are,
as might be expected, par-
ticularly harmful. The pub-
lic indifference is made by
the officials who have charge
of the erection of important
buildings an excuse for
evading their responsibili-

ties to decorative art, and is used as a screen
for their own deficiencies in taste. As there is no
urgent demand for the encouragement of the finest
type of decoration, the most trivial and common-
place kind of work is usually accepted, because it is
cheap and easily obtained, and because it imposes
no strain upon the intelligence of the people to
whom the duty of making a selection is entrusted.
What is good enough for the man in the street
seems quite satisfactory to the official mind, which
is constitutionally intolerant of all criticism from
the expert.
But by constant concession to uneducated
opinion the position of decorative art in this
country has been very unfairly affected. If we had
treated it with the same consideration that it has
received abroad, we should have had by now an