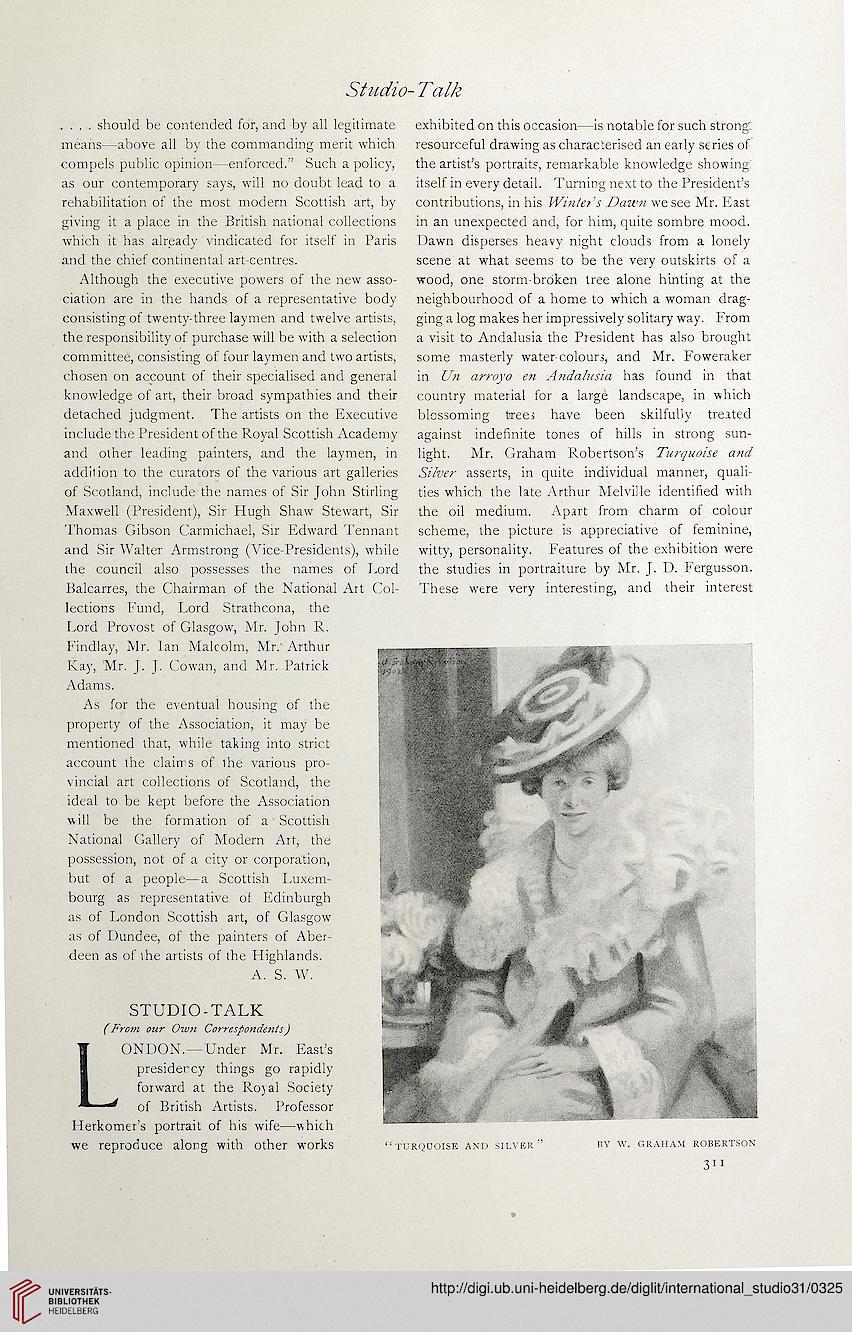 . . . . should be contended for, and by all legitimate
means—above all by the commanding merit which
compels public opinion—enforced.” Such a policy,
as our contemporary says, will no doubt lead to a
rehabilitation of the most modern Scottish art, by
giving it a place in the British national collections
which it has already vindicated for itself in Paris
and the chief continental art-centres.
Although the executive powers of the new asso-
ciation are in the hands of a representative body
consisting of twenty-three laymen and twelve artists,
the responsibility of purchase will be with a selection
committee, consisting of four laymen and two artists,
chosen on account of their specialised and general
knowledge of art, their broad sympathies and their
detached judgment. The artists on the Executive
include the President of the Royal Scottish Academy
and other leading painters, and the laymen, in
addilion to the curators of the various art galleries
of Scotland, include the names of Sir John Stirling
Maxwell (President), Sir Hugh Shaw Stewart, Sir
Thomas Gibson Carmichael, Sir Edward Tennant
and Sir Walter Armstrong (Vice-Presidents), while
the council also possesses the names of Lord
Balcarres, the Chairman of the National Art Col-
lections Fund, Lord Strathcona, the
Lord Provost of Glasgow, Mr. John R.
Findlay, Mr. Ian Malcolm, Mr.' Arthur
Kay, Mr. J. J. Cowan, and Mr. Patrick
Adams.
As for the eventual housing of the
property of the Association, it may be
mentioned that, while taking into strict
account the claims of ihe various pro-
vincial art collections of Scotland, the
ideal to be kept before the Association
will be the formation of a Scottish
National Gallery of Modern Art, the
possession, not of a city or corporation,
but of a people—a Scottish Luxem-
bourg as representative of Edinburgh
as of London Scottish art, of Glasgow
as of Dundee, of the painters of Aber-
deen as of the artists of the Highlands.
A. S. W.
STUDIO-TALK
(From our Own Correspondents)
ONDON.— Under Mr. East’s
presidency things go rapidly
forward at the Ro)al Society
of British Artists. Professor
Herkomer’s portrait of his wife—which
we reproduce along with other works

exhibited on this occasion—is notable for such strong:,
resourceful drawing as characterised an early series of
the artist’s portraits, remarkable knowledge showing,
itself in every detail. Turning next to the President’s
contributions, in his Winter's Dawn we see Mr. East
in an unexpected and, for him, quite sombre mood.
Dawn disperses heavy night clouds from a lonely
scene at what seems to be the very outskirts of a
wood, one storm-broken tree alone hinting at the
neighbourhood of a home to which a woman drag-
ging a log makes her impressively solitary way. From
a visit to Andalusia the President has also brought
some masterly water-colours, and Mr. Foweraker
in Un arroyo en Andalusia has found in that
country material for a large landscape, in which
blossoming trees have been skilfully treated
against indefinite tones of hills in strong sun-
light. Mr. Graham Robertson’s Turquoise and
Silver asserts, in quite individual manner, quali-
ties which the late Arthur Melville identified with
the oil medium. Apart from charm of colour
scheme, the picture is appreciative of feminine,
witty, personality. Features of the exhibition were
the studies in portraiture by Mr. J. D. Fergusson.
These were very interesting, and their interest