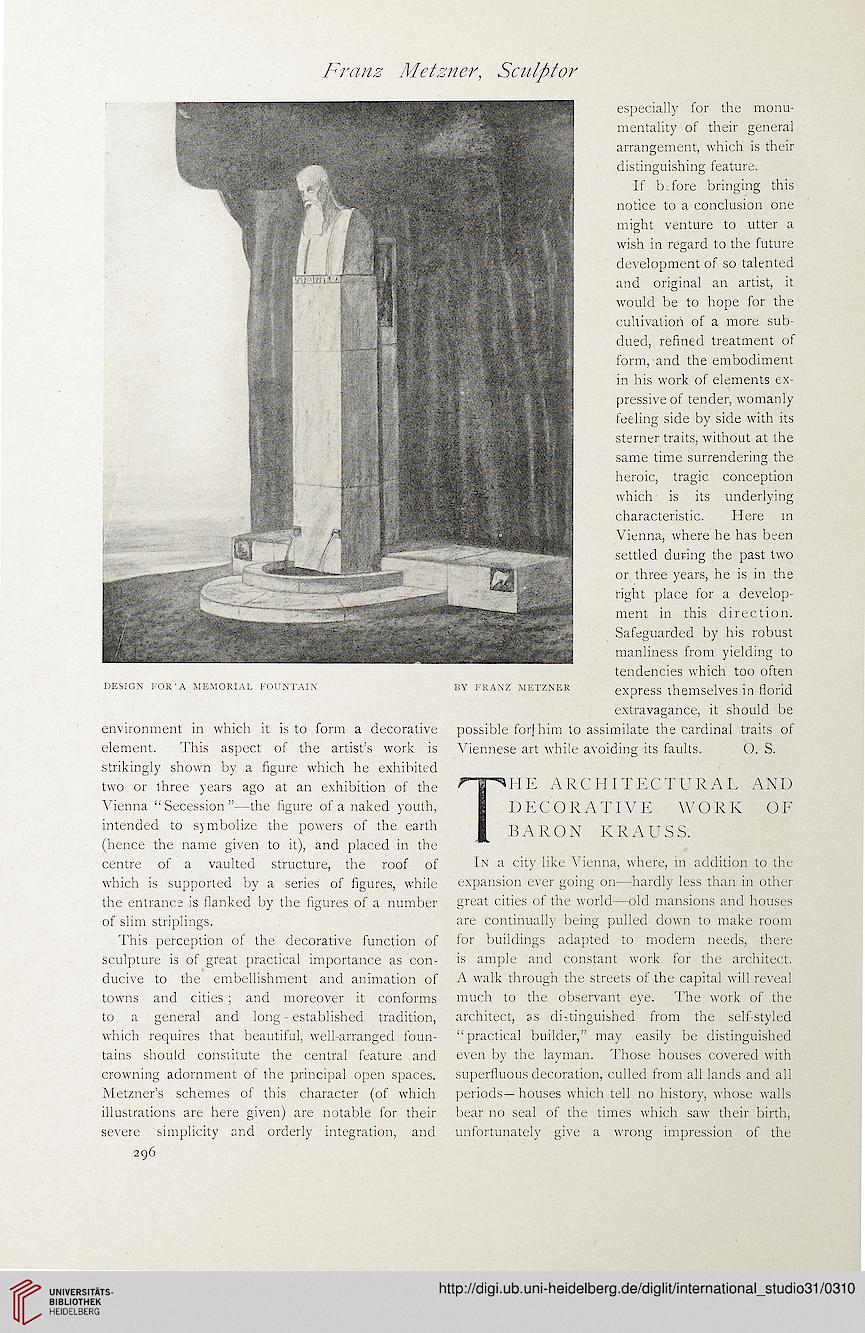 DESIGN FOR‘A MEMORIAL FOUNTAIN
environment in which it is to form a decorative
element. This aspect of the artist’s work is
strikingly shown by a figure which he exhibited
two or three years ago at an exhibition of the
Vienna “ Secession ”—the figure of a naked youth,
intended to symbolize the powers of the earth
(hence the name given to it), and placed in the
centre of a vaulted structure, the roof of
which is supported by a series of figures, while
the entrance is flanked by the figures of a number
of slim striplings.
This perception of the decorative function of
sculpture is of great practical importance as con-
ducive to the embellishment and animation of
towns and cities; and moreover it conforms
to a general and long - established tradition,
which requires that beautiful, well-arranged foun-
tains should constitute the central feature and
crowning adornment of the principal open spaces.
Metzner’s schemes of this character (of which
illustrations are here given) are notable for their
severe simplicity and orderly integration, and
296

especially for the monu-
mentality of their general
arrangement, which is their
distinguishing feature.
If before bringing this
notice to a conclusion one
might venture to utter a
wish in regard to the future
development of so talented
and original an artist, it
would be to hope for the
cultivation of a more sub-
dued, refined treatment of
form, and the embodiment
in his work of elements ex-
pressive of tender, womanly
feeling side by side with its
sterner traits, without at the
same time surrendering the
heroic, tragic conception
which is its underlying
characteristic. Here in
Vienna, where he has been
settled during the past two
or three years, he is in the
right place for a develop-
ment in this direction.
Safeguarded by his robust
manliness from yielding to
tendencies which too often
express themselves in florid
extravagance, it should be
possible forjhim to assimilate the cardinal traits of
Viennese art while avoiding its faults. O. S.
HE ARCHITECTURAL AND
DECORATIVE WORK O F
BARON KRAUSS.
In a city like Vienna, where, in addition to the
expansion ever going on—hardly less than in other
great cities of the world—old mansions and houses
are continually being pulled down to make room
for buildings adapted to modern needs, there
is ample and constant work for the architect.
A walk through the streets of the capital will reveal
much to the observant eye. The work of the
architect, as distinguished from the self-styled
“practical builder,” may easily be distinguished
even by the layman. Those houses covered with
superfluous decoration, culled from all lands and all
periods— houses which tell no history, whose walls
bear no seal of the times which saw their birth,
unfortunately give a wrong impression of the