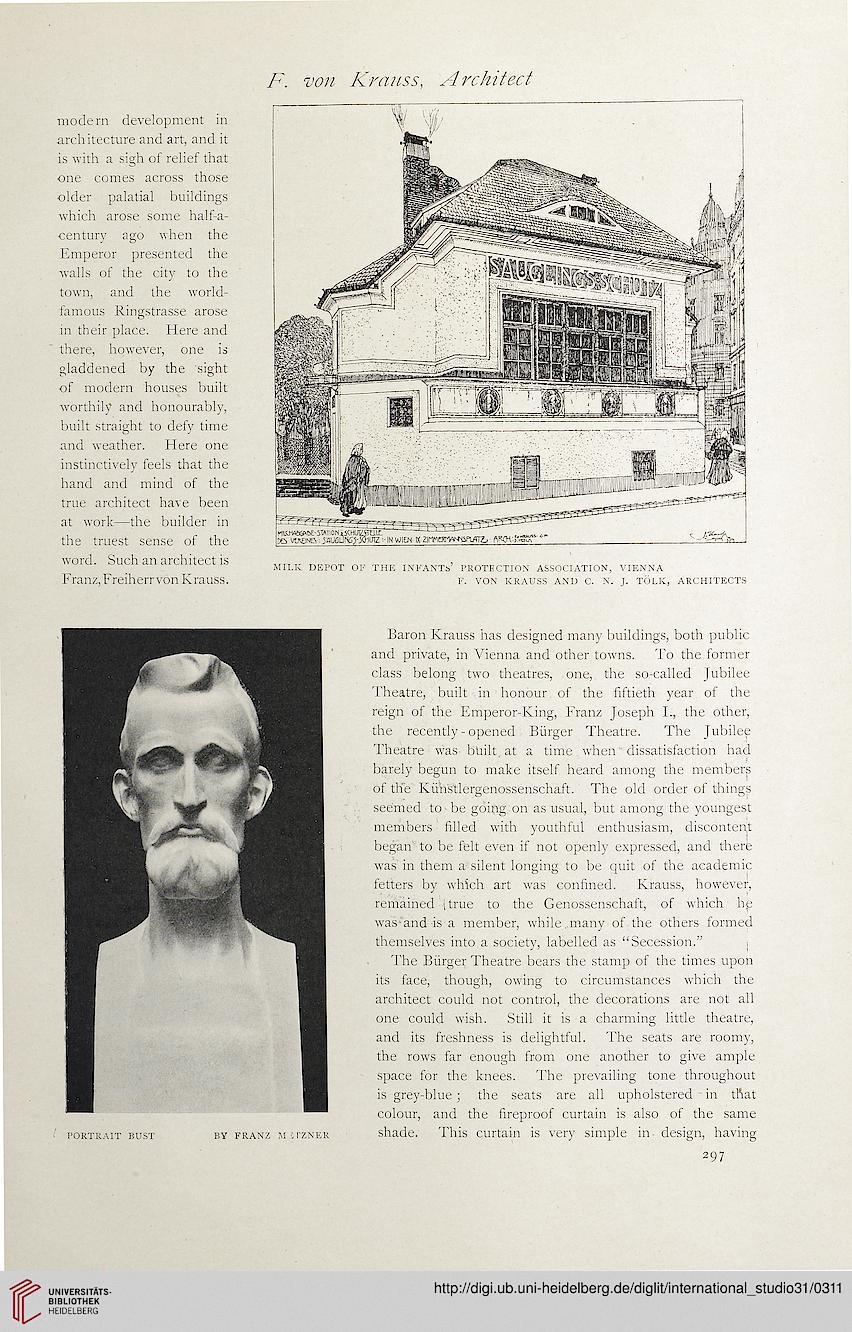 Information about OCR text
modern development in
architecture and art, and it
is with a sigh of relief that
one comes across those
older palatial buildings
which arose some half-a-
•century ago when the
Emperor presented the
walls of the city to the
town, and the world-
famous Ringstrasse arose
in their place. Here and
there, however, one is
gladdened by the sight
of modern houses built
worthily and honourably,
built straight to defy time
and weather. Here one
instinctively feels that the
hand and mind of the
true architect have been
at work—the builder in
the truest sense of the
word. Such an architect is
Franz, Freiherr von Krauss.


Baron Krauss has designed many buildings, both public
and private, in Vienna and other towns. To the former
class belong two theatres, one, the so-called Jubilee
Theatre, built in honour of the fiftieth year of the
reign of the Emperor-King, Franz Joseph I., the other,
the recently - opened Burger Theatre. The Jubilee
Theatre was built at a time when dissatisfaction had
barely begun to make itself heard among the members
of the Kiins'tlergenossenschaft. The old order of things
seemed to be going on as usual, but among the youngest
members filled with youthful enthusiasm, discontent
began to be felt even if not openly expressed, and there
was in them a silent longing to be quit of the academic
fetters by which art was confined. Krauss, however,
remained ttrue to the Genossenschaft, of which hp
was: and is a member, while ..many of the others formed
themselves into a society, labelled as “Secession.”
The Burger Theatre bears the stamp of the times upon
its face, though, owing to circumstances which the
architect could not control, the decorations are not all
one could wish. Still it is a charming little theatre,
and its freshness is delightful. The seats are roomy,
the rows far enough from one another to give ample
space for the knees. The prevailing tone throughout
is grey-blue; the seats are all upholstered - in that
colour, and the fireproof curtain is also of the same
shade. This curtain is very simple in- design, having
297