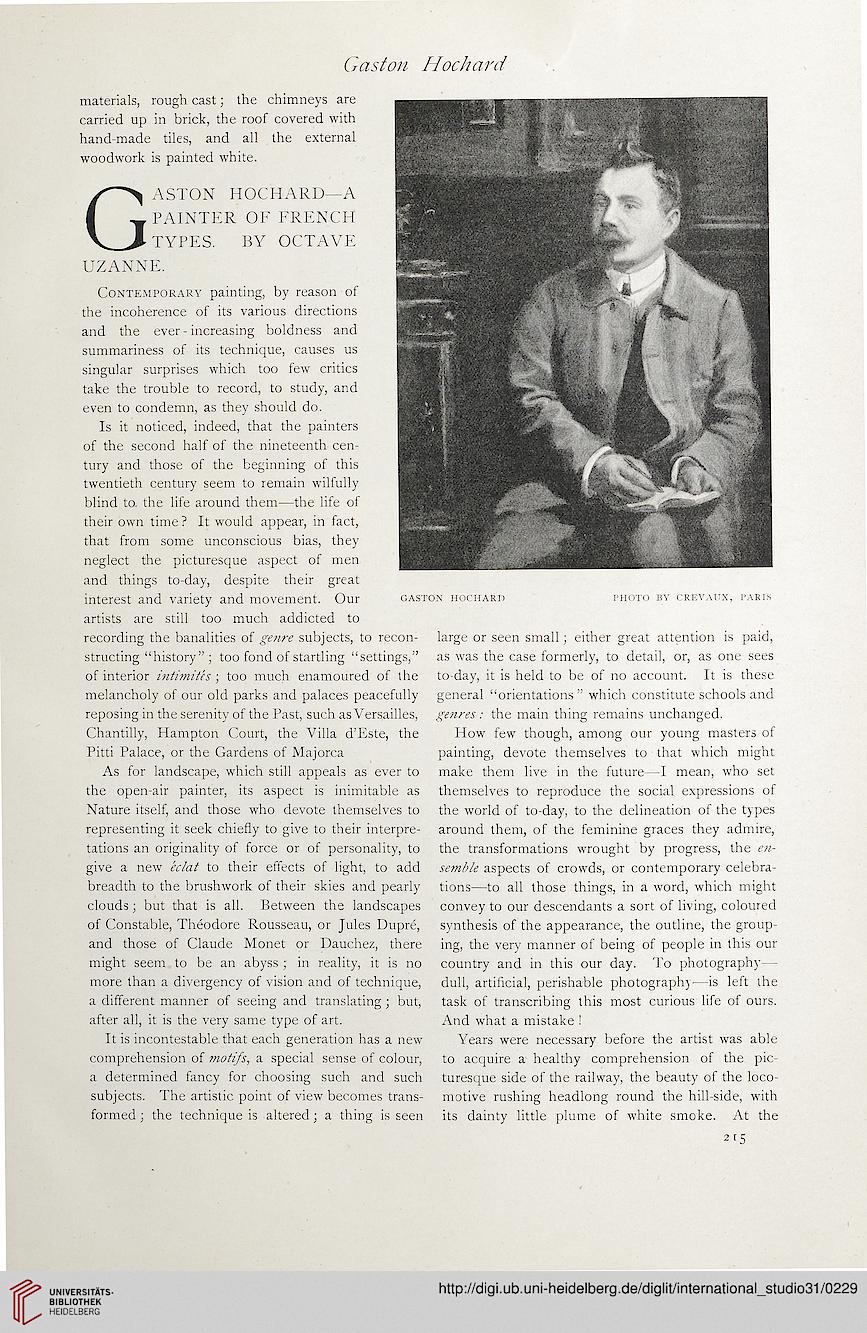 materials, rough cast; the chimneys are
carried up in brick, the roof covered with
hand-made tiles, and all the external
woodwork is painted white.

Gaston hochard—a
PAINTER OF FRENCH
TYPES. BY OCTAVE
UZANNE.
Contemporary painting, by reason of
the incoherence of its various directions
and the ever-increasing boldness and
summariness of its technique, causes us
singular surprises which too few critics
take the trouble to record, to study, and
even to condemn, as they should do.
Is it noticed, indeed, that the painters
of the second half of the nineteenth cen-
tury and those of the beginning of this
twentieth century seem to remain wilfully
blind to. the life around them—the life of
their own time ? It would appear, in fact,
that from some unconscious bias, they
neglect the picturesque aspect of men
and things to-day, despite their great
interest and variety and movement. Our
artists are still too much addicted to
recording the banalities of genre subjects, to recon-
structing “history” ; too fond of startling “settings,”
of interior intimites ; too much enamoured of the
melancholy of our old parks and palaces peacefully
reposing in the serenity of the Past, such as Versailles,
Chantilly, Hampton Court, the Villa d’Este, the
Pitti Palace, or the Gardens of Majorca
As for landscape, which still appeals as ever to
the open-air painter, its aspect is inimitable as
Nature itself, and those who devote themselves to
representing it seek chiefly to give to their interpre-
tations an originality of force or of personality, to
give a new eclat to their effects of light, to add
breadth to the brushwork of their skies and pearly
clouds; but that is all. Between the landscapes
of Constable, Theodore Rousseau, or Jules Dupre,
and those of Claude Monet or Dauchez, there
might seem to be an abyss ; in reality, it is no
more than a divergency of vision and of technique,
a different manner of seeing and translating; but,
after all, it is the very same type of art.
It is incontestable that each generation has a new
comprehension of motifs, a special sense of colour,
a determined fancy for choosing such and such
subjects. The artistic point of view becomes trans-
formed j the technique is altered; a thing is seen

GASTON HOCHARD PHOTO BY CREVAUX, PARIS
large or seen small; either great attention is paid,
as was the case formerly, to detail, or, as one sees
to-day, it is held to be of no account. It is these
general “orientations ” which constitute schools and
genres: the main thing remains unchanged.
How few though, among our young masters of
painting, devote themselves to that which might
make them live in the future—I mean, who set
themselves to reproduce the social expressions of
the world of to-day, to the delineation of the types
around them, of the feminine graces they admire,
the transformations wrought by progress, the en-
semble aspects of crowds, or contemporary celebra-
tions—to all those things, in a word, which might
convey to our descendants a sort of living, coloured
synthesis of the appearance, the outline, the group-
ing, the very manner of being of people in this our
country and in this our day. To photography—
dull, artificial, perishable photography—is left the
task of transcribing this most curious life of ours.
And what a mistake !
Years were necessary before the artist was able
to acquire a healthy comprehension of the pic-
turesque side of the railway, the beauty of the loco-
motive rushing headlong round the hill-side, with
its dainty little plume of white smoke. At the
2 15