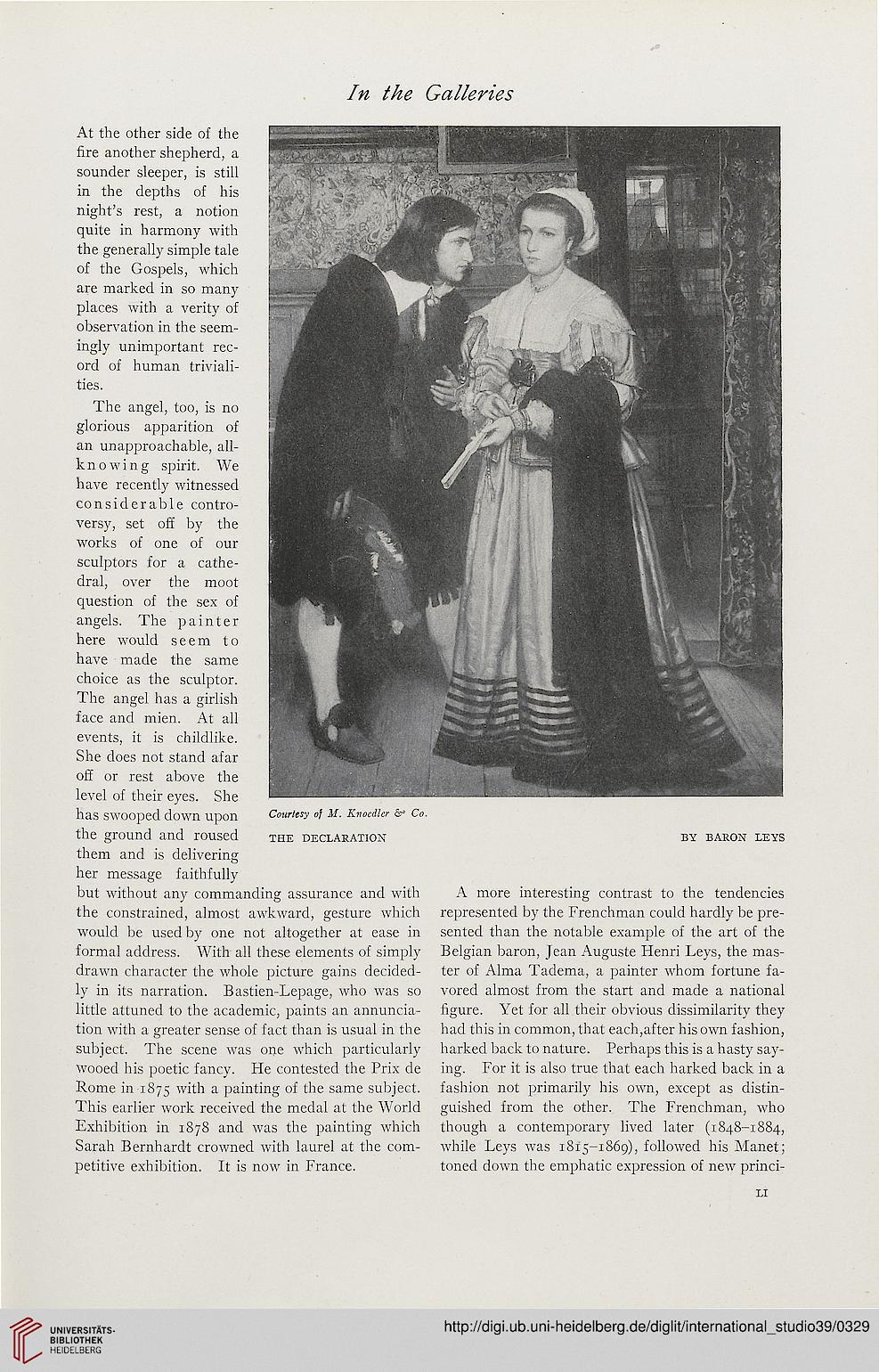 At the other side of the
fire another shepherd, a
sounder sleeper, is still
in the depths of his
night's rest, a notion
quite in harmony with
the generally simple tale
of the Gospels, which
are marked in so many
places with a verity of
observation in the seem-
ingly unimportant rec-
ord of human triviali-
ties.

The angel, too, is no
glorious apparition of
an unapproachable, all-
knowing spirit. We
have recently witnessed
considerable contro-
versy, set off by the
works of one of our
sculptors for a cathe-
dral, over the moot
question of the sex of
angels. The painter
here would seem to
have made the same
choice as the sculptor.
The angel has a girlish
face and mien. At all
events, it is childlike.
She does not stand afar
off or rest above the
level of their eyes. She

has SWOOped down upon Courtesy oj M. Knoeiler &■ Co.

but without any commanding assurance and with A more interesting contrast to the tendencies
the constrained, almost awkward, gesture which represented by the Frenchman could hardly be pre-
would be used by one not altogether at ease in sented than the notable example of the art of the
formal address. With all these elements of simply Belgian baron, Jean Auguste Henri Leys, the mas-
drawn character the whole picture gains decided- ter of Alma Tadema, a painter whom fortune fa-
ly in its narration. Bastien-Lepage, who was so vored almost from the start and made a national
little attuned to the academic, paints an annuncia- figure. Yet for all their obvious dissimilarity they
tion with a greater sense of fact than is usual in the had this in common, that each,after his own fashion,
subject. The scene was one which particularly harked back to nature. Perhaps this is a hasty say-
wooed his poetic fancy. He contested the Prix de ing. For it is also true that each harked back in a
Rome in 1875 with a painting of the same subject, fashion not primarily his own, except as distin-
This earlier work received the medal at the World guished from the other. The Frenchman, who
Exhibition in 1878 and was the painting which though a contemporary lived later (1848-1884,
Sarah Bernhardt crowned with laurel at the com- while Leys was 1815-1869), followed his Manet;
petitive exhibition. It is now in France. toned down the emphatic expression of new princi-