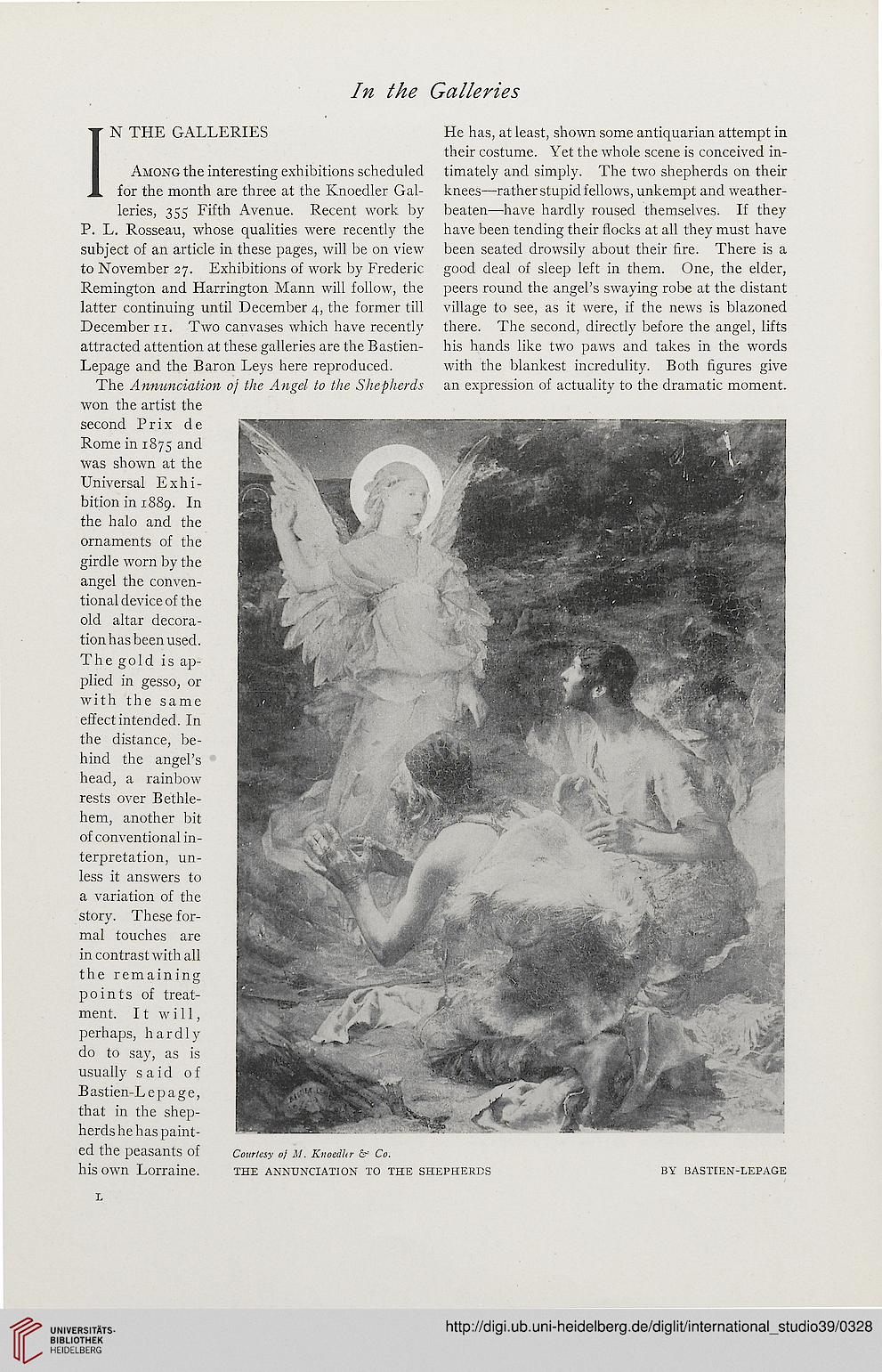 IN THE GALLERIES He has, at least, shown some antiquarian attempt in

their costume. Yet the whole scene is conceived in-
Among the interesting exhibitions scheduled timately and simply. The two shepherds on their
for the month are three at the Knoedler Gal- knees—rather stupid fellows, unkempt and weather-
leries, 355 Fifth Avenue. Recent work by beaten—have hardly roused themselves. If they
P. L. Rosseau, whose qualities were recently the have been tending their flocks at all they must have
subject of an article in these pages, will be on view been seated drowsily about their fire. There is a
to November 27. Exhibitions of work by Frederic good deal of sleep left in them. One, the elder,
Remington and Harrington Mann will follow, the peers round the angel's swaying robe at the distant
latter continuing until December 4, the former till village to see, as it were, if the news is blazoned
December 11. Two canvases which have recently there. The second, directly before the angel, lifts
attracted attention at these galleries are the Bastien- his hands like two paws and takes in the words
Lepage and the Baron Leys here reproduced. with the blankest incredulity. Both figures give

The Annunciation oj the Angel to the Shepherds an expression of actuality to the dramatic moment,
won the artist the
second Prix de
Rome in 1875 and
was shown at the
Universal E x h i -
bition in 1889. In
the halo and the
ornaments of the
girdle worn by the
angel the conven-
tional device of the
old altar decora-
tion has been used.
The gold is ap-
plied in gesso, or
with the same
effect intended. In
the distance, be-
hind the angel's
head, a rainbow
rests over Bethle-
hem, another bit
of conventional in-
terpretation, un-
less it answers to
a variation of the
story. These for-
mal touches are
in contrast with all
the remaining
points of treat-
ment. It will,
perhaps, hardly
do to say, as is
usually said of
Bastien-Lepage,
that in the shep-
herds he has paint-
ed the peasants of Courtesy oj M. Knoedhr &• Co.

his own Lorraine. the annunciation to the shepherds by bastien-lepage