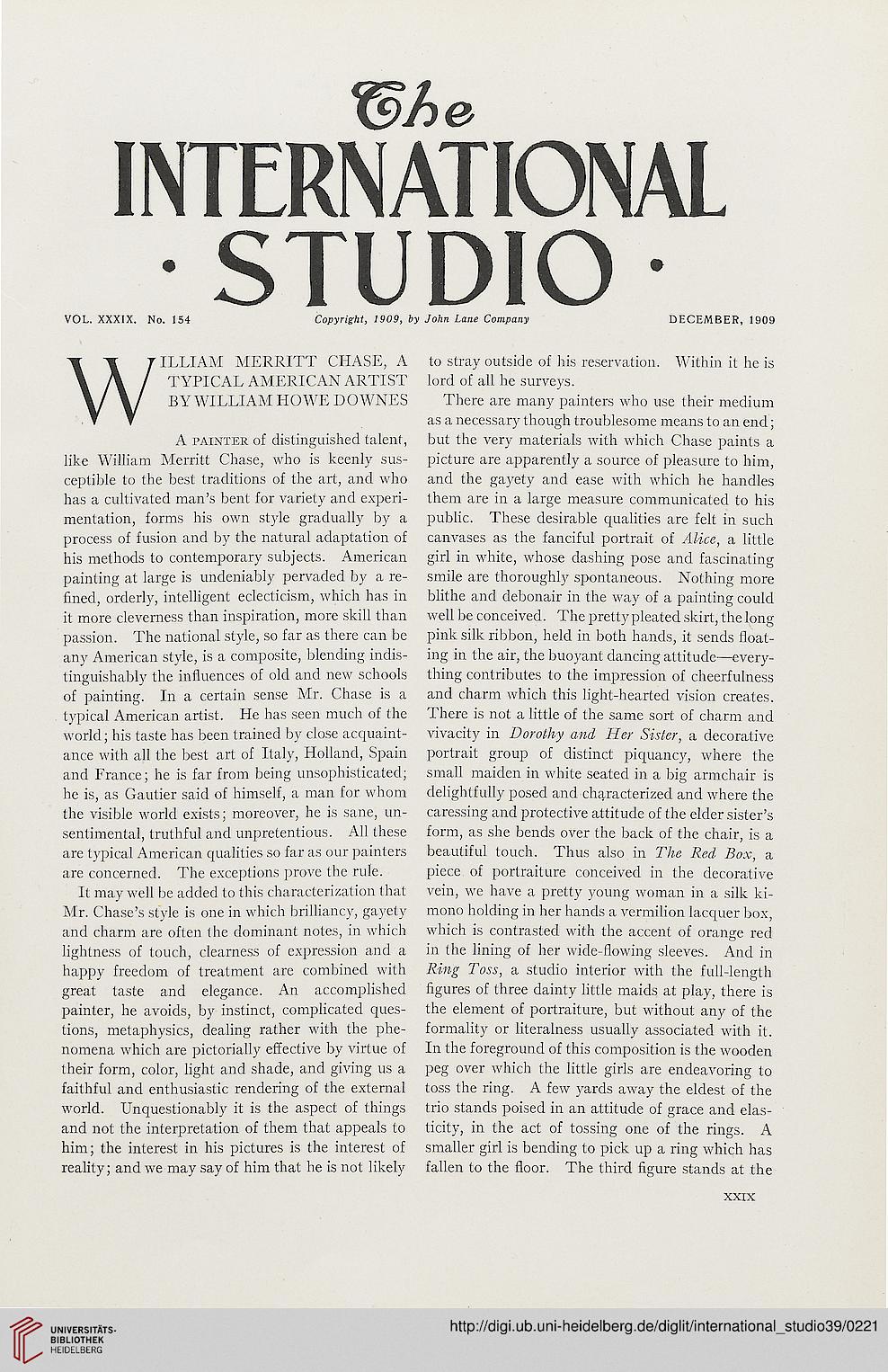 A painter of distinguished talent,
like William Merritt Chase, who is keenly sus-
ceptible to the best traditions of the art, and who
has a cultivated man's bent for variety and experi-
mentation, forms his own style gradually by a
process of fusion and by the natural adaptation of
his methods to contemporary subjects. American
painting at large is undeniably pervaded by a re-
fined, orderly, intelligent eclecticism, which has in
it more cleverness than inspiration, more skill than
passion. The national style, so far as there can be
any American style, is a composite, blending indis-
tinguishably the influences of old and new schools
of painting. In a certain sense Mr. Chase is a
typical American artist. He has seen much of the
world; his taste has been trained by close acquaint-
ance with all the best art of Italy, Holland, Spain
and France; he is far from being unsophisticated;
he is, as Gautier said of himself, a man for whom
the visible world exists; moreover, he is sane, un-
sentimental, truthful and unpretentious. All these
are typical American qualities so far as our painters
are concerned. The exceptions prove the rule.

It may well be added to this characterization that
Mr. Chase's style is one in which brilliancy, gayety
and charm are often the dominant notes, in which
lightness of touch, clearness of expression and a
happy freedom of treatment are combined with
great taste and elegance. An accomplished
painter, he avoids, by instinct, complicated ques-
tions, metaphysics, dealing rather with the phe-
nomena which are pictorially effective by virtue of
their form, color, light and shade, and giving us a
faithful and enthusiastic rendering of the external
world. Unquestionably it is the aspect of things
and not the interpretation of them that appeals to
him; the interest in his pictures is the interest of
reality; and we may say of him that he is not likely

to stray outside of his reservation. Within it he is
lord of all he surveys.

There are many painters who use their medium
as a necessary though troublesome means to an end;
but the very materials with which Chase paints a
picture are apparently a source of pleasure to him,
and the gayety and ease with which he handles
them are in a large measure communicated to his
public. These desirable qualities are felt in such
canvases as the fanciful portrait of Alice, a. little
girl in white, whose dashing pose and fascinating
smile are thoroughly spontaneous. Nothing more
blithe and debonair in the way of a painting could
well be conceived. The pretty pleated skirt, the long
pink silk ribbon, held in both hands, it sends float-
ing in the air, the buoyant dancing attitude—every-
thing contributes to the impression of cheerfulness
and charm which this light-hearted vision creates.
There is not a little of the same sort of charm and
vivacity in Dorothy and Her Sister, a decorative
portrait group of distinct piquancy, where the
small maiden in white seated in a big armchair is
delightfully posed and characterized and where the
caressing and protective attitude of the elder sister's
form, as she bends over the back of the chair, is a
beautiful touch. Thus also in The Red Box, a
piece of portraiture conceived in the decorative
vein, we have a pretty young woman in a silk ki-
mono holding in her hands a vermilion lacquer box,
which is contrasted with the accent of orange red
in the lining of her wide-flowing sleeves. And in
Ring Toss, a studio interior with the full-length
figures of three dainty little maids at play, there is
the element of portraiture, but without any of the
formality or literalness usually associated with it.
In the foreground of this composition is the wooden
peg over which the little girls are endeavoring to
toss the ring. A few yards away the eldest of the
trio stands poised in an attitude of grace and elas-
ticity, in the act of tossing one of the rings. A
smaller girl is bending to pick up a ring which has
fallen to the floor. The third figure stands at the