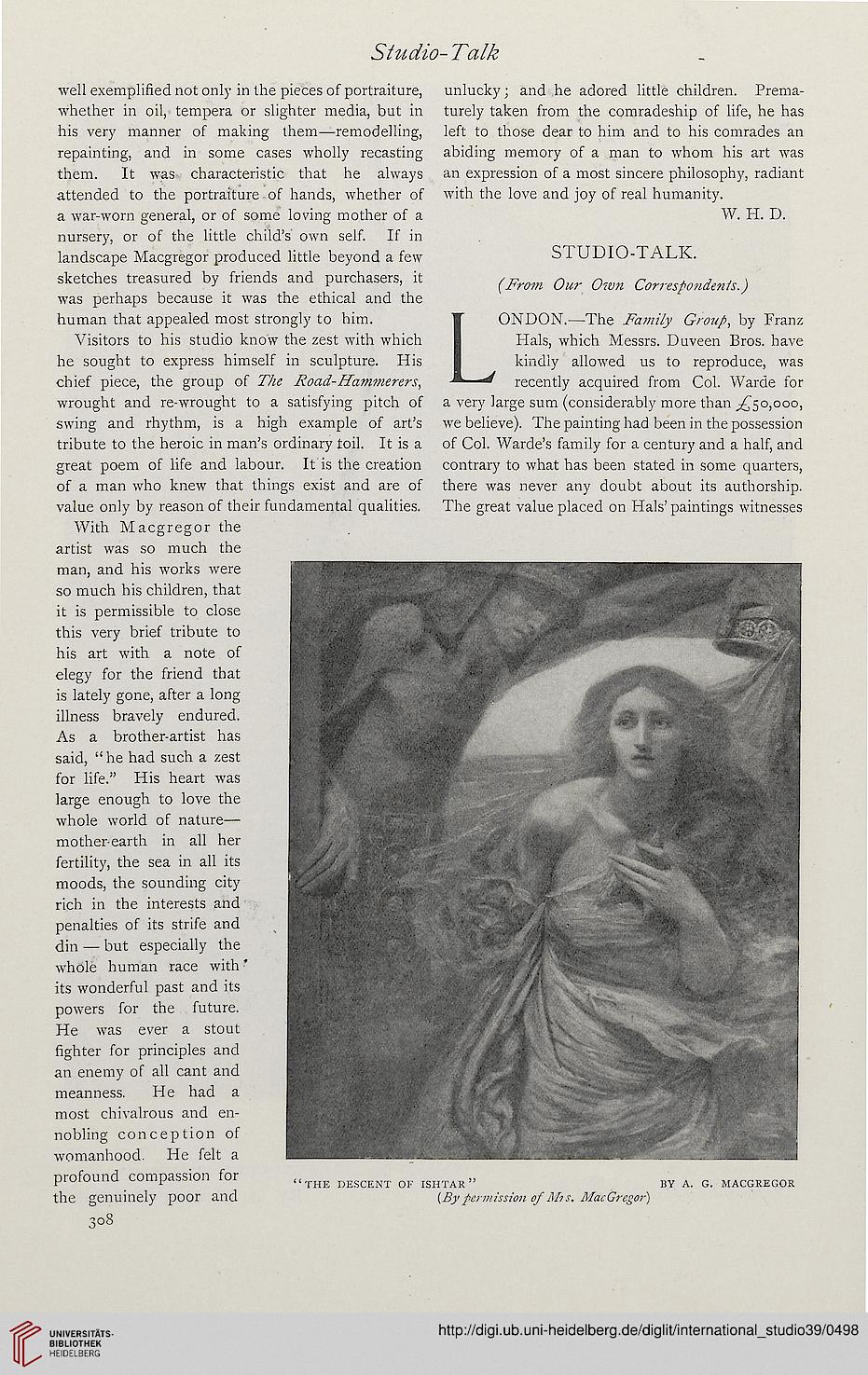 well exemplified not only in the pieces of portraiture, unlucky ; and he adored little children. Prema-
whether in oil, tempera or slighter media, but in turely taken from the comradeship of life, he has
his very manner of making them—remodelling, left to those dear to him and to his comrades an
repainting, and in some cases wholly recasting abiding memory of a man to whom his art was
them. It was characteristic that he always an expression of a most sincere philosophy, radiant
attended to the portraiture of hands, whether of with the love and joy of real humanity,
a war-worn general, or of some loving mother of a W. H. D.

nursery, or of the little child's own self. If in

landscape Macgregor produced little beyond a few STUDIO-TALK,
sketches treasured by friends and purchasers, it
was perhaps because it was the ethical and the
human that appealed most strongly to him. ONDON.—The Family Group, by Franz

Visitors to his studio know the zest with which Hals, which Messrs. Duveen Bros, have

he sought to express himself in sculpture. His kindly allowed us to reproduce, was

chief piece, the group of The Road-Hammerers, » recently acquired from Col. Warde for

wrought and re-wrought to a satisfying pitch of a very large sum (considerably more than ^50,000,
swing and rhythm, is a high example of art's we believe). The painting had been in the possession
tribute to the heroic in man's ordinary toil. It is a of Col. Warde's family for a century and a half, and
great poem of life and labour. It is the creation contrary to what has been stated in some quarters,
of a man who knew that things exist and are of there was never any doubt about its authorship,
value only by reason of their fundamental qualities. The great value placed on Hals' paintings witnesses

With Macgregor the
artist was so much the
man, and his works were
so much his children, that
it is permissible to close
this very brief tribute to
his art with a note of £§111
elegy for the friend that
is lately gone, after a long
illness bravely endured.
As a brother-artist has
said, " he had such a zest
for life." His heart was

whole world of nature—
mother-earth in all her
fertility, the sea in all its
moods, the sounding city
rich in the interests and
penalties of its strife and I
din — but especially the

its wonderful past and its
powers for the future.

fighter for principles and
an enemy of all cant and

most chivalrous and en- |
nobling conception of M
womanhood. He felt a

the genuinely poor and (By permission of Mis. MacGrcgor)