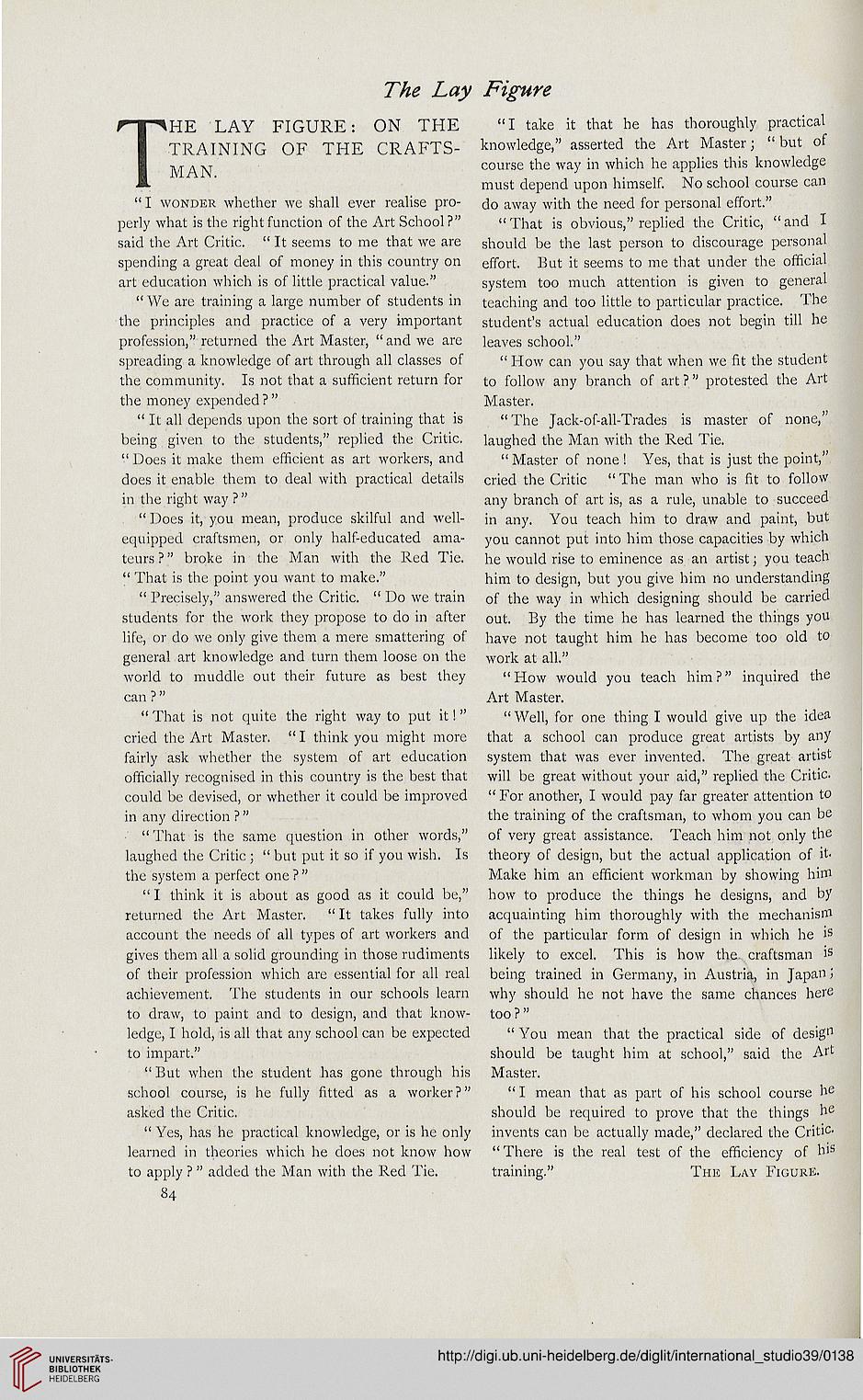 ie lay figure: on the
:raining of the crafts-

" I wonder whether we shall ever realise pro-
perly what is the right function of the Art School?"
said the Art Critic. " It seems to me that we are
spending a great deal of money in this country on
art education which is of little practical value."

" We are training a large number of students in
the principles and practice of a very important
profession," returned the Art Master, " and we are
spreading a knowledge of art through all classes of
the community. Is not that a sufficient return for
the money expended ? "

" It all depends upon the sort of training that is
being given to the students," replied the Critic.
" Docs it make them efficient as art workers, and
does it enable them to deal with practical details
in the right way ? "

"Does it, you mean, produce skilful and well-
equipped craftsmen, or only half-educated ama-
teurs ?" broke in the Man with the Red Tie.
" That is the point you want to make."

" Precisely," answered the Critic. " Do we train
students for the work they propose to do in after
life, or do we only give them a mere smattering of
general art knowledge and turn them loose on the
world to muddle out their future as best they
can?"

" That is not quite the right way to put it!"
cried the Art Master. " 1 think you might more
fairly ask whether the system of art education
officially recognised in this country is the best that
could be devised, or whether it could be improved
in any direction ? "

" That is the same question in other words,"
laughed the Critic; "but put it so if you wish. Is
the system a perfect one ?"

" I think it is about as good as it could be,"
returned the Art Master. " It takes fully into
account the needs of all types of art workers and
gives them all a solid grounding in those rudiments
of their profession which are essential for all real
achievement. The students in our schools learn
to draw, to paint and to design, and that know-
ledge, I hold, is all that any school can be expected
to impart."

"But when the student has gone through his
school course, is he fully fitted as a worker?"
asked the Critic.

" Yes, has he practical knowledge, or is he only
learned in theories which he does not know how
to apply ? " added the Man with the Red Tie.
84

"I take it that he has thoroughly practical
knowledge," asserted the Art Master; " but of
course the way in which he applies this knowledge
must depend upon himself. No school course can
do away with the need for personal effort."

"That is obvious," replied the Critic, "and I
should be the last person to discourage personal
effort. Hut it seems to me that under the official
system too much attention is given to general
teaching and too little to particular practice. The
student's actual education does not begin till he
leaves school."

" 1 low can you say that when we fit the student
to follow any branch of art ?" protested the Art
Master.

"The Jack-of-all-Trades is master of none,"
laughed the Man with the Red Tie.

" Master of none ! Yes, that is just the point,"
cried the Critic " The man who is fit to follow
any branch of art is, as a rule, unable to succeed
in any. You teach him to draw and paint, but
you cannot put into him those capacities by which
he would rise to eminence as an artist; you teach
him to design, but you give him no understanding
of the way in which designing should be carried
out. By the time he has learned the things you
have not taught him he has become too old to
work at all."

"How would you teach him?" inquired the
Art Master.

"Well, for one thing I would give up the idea
that a school can produce great artists by any
system that was ever invented. The great artist
will be great without your aid," replied the Critic.
" For another, I would pay far greater attention to
the training of the craftsman, to whom you can

of very great assistance. Teach him not only the
theory of design, but the actual application of it-
Make him an efficient workman by showing him
how to produce the things he designs, and by
acquainting him thoroughly with the mechanism
of the particular form of design in which he is
likely to excel. This is how the craftsman i*
being trained in Germany, in Austria, in Japan.;?
why should he not have the same chances here
too ?"

" You mean that the practical side of desig11
should be taught him at school," said the Art
Master.

" I mean that as part of his school course he
should be required to prove that the things he
invents can be actually made," declared the Critic-
"There is the real test of the efficiency of hi?
training." Tun Day I'icukic