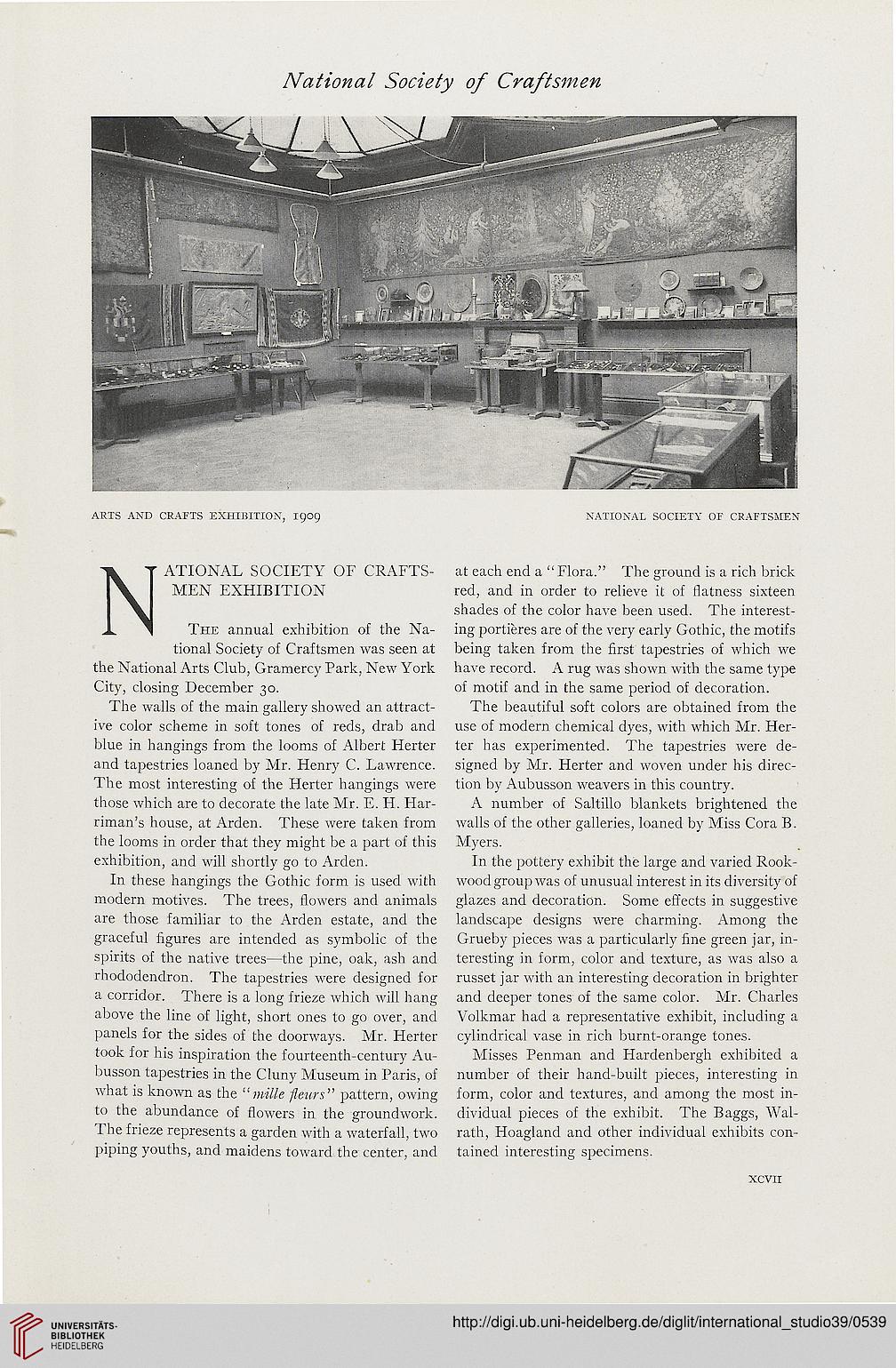 NATIONAL SOCIETY OF CRAFTS- at each end a "Flora." The ground is a rich brick

MEN EXHIBITION red, and in order to relieve it of flatness sixteen
shades of the color have been used. The interest-

The annual exhibition of the Na- ing portieres are of the very early Gothic, the motifs

the National Arts Club, Gramercy Park, New York have record. A rug was shown with the same type

City, closing December 30. of motif and in the same period of decoration.

ive color scheme in soft tones of reds, drab and use of modern chemical dyes, with which Mr. Her-

blue in hangings from the looms of Albert Herter ter has experimented. The tapestries were de-

and tapestries loaned by Mr. Henry C. Lawrence, signed by Mr. Herter and woven under his direc-

The most interesting of the Herter hangings were tion by Aubusson weavers in this country,
those which are to decorate the late Mr. E. H. Har- A number of Saltillo blankets brightened the

riman's house, at Arden. These were taken from walls of the other galleries, loaned by Miss Cora B.

the looms in order that they might be a part of this Myers.

exhibition, and will shortly go to Arden. In the pottery exhibit the large and varied Rook-
In these hangings the Gothic form is used with wood group was of unusual interest in its diversity of
modern motives. The trees, flowers and animals glazes and decoration. Some effects in suggestive
are those familiar to the Arden estate, and the landscape designs were charming. Among the
graceful figures are intended as symbolic of the Grueby pieces was a particularly fine green jar, in-
spirits of the native trees—the pine, oak, ash and teresting in form, color and texture, as was also a
rhododendron. The tapestries were designed for russet jar with an interesting decoration in brighter
a corridor. There is a long frieze which will hang and deeper tones of the same color. Mr. Charles
above the line of light, short ones to go over, and Volkmar had a representative exhibit, including a
panels for the sides of the doorways. Mr. Herter cylindrical vase in rich burnt-orange tones,
took for his inspiration the fourteenth-century Au- Misses Penman and Hardenbergh exhibited a
busson tapestries in the Cluny Museum in Paris, of number of their hand-built pieces, interesting in
what is known as the "milk fleurs" pattern, owing form, color and textures, and among the most in-
to the abundance of flowers in the groundwork, dividual pieces of the exhibit. The Baggs, Wal-
The frieze represents a garden with a waterfall, two rath, Hoagland and other individual exhibits con-
piping youths, and maidens toward the center, and tained interesting specimens.