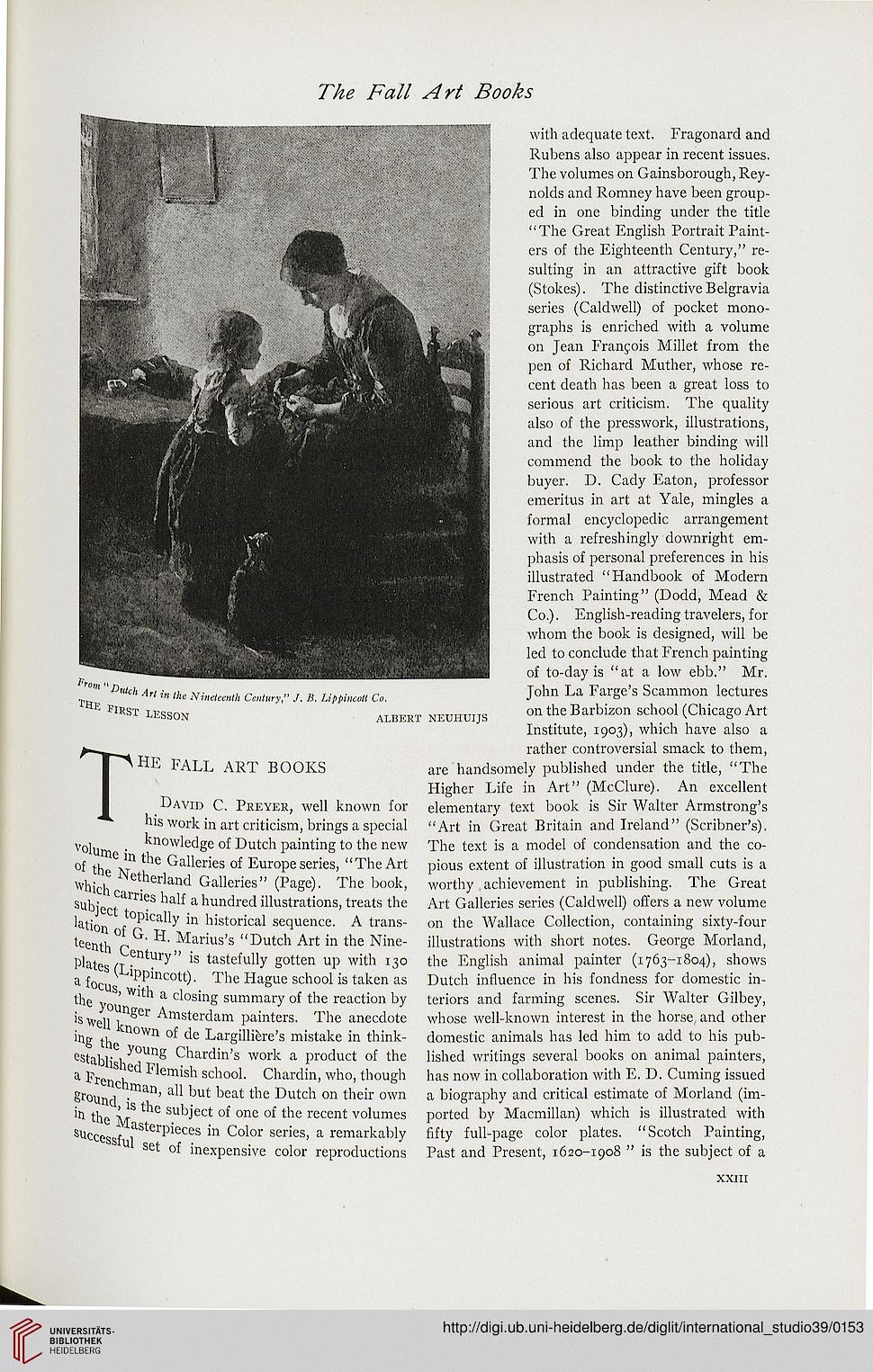 with adequate text. Fragonard and
Rubens also appear in recent issues.
The volumes on Gainsborough, Rey-
nolds and Romney have been group-
ed in one binding under the title
"The Great English Portrait Paint-
ers of the Eighteenth Century," re-
sulting in an attractive gift book
(Stokes). The distinctiveBelgravia
series (Caldwell) of pocket mono-
graphs is enriched with a volume
on Jean Francois Millet from the
pen of Richard M'uther, whose re-
cent death has been a great loss to
serious art criticism. The quality
also of the presswork, illustrations,
and the limp leather binding will
commend the book to the holiday
buyer. D. Cady Eaton, professor
emeritus in art at Yale, mingles a
formal encyclopedic arrangement
with a refreshingly downright em-
phasis of personal preferences in his
illustrated "Handbook of Modern
French Painting" (Dodd, Mead &
Co.). English-reading travelers, for
whom the book is designed, will be
led to conclude that French painting
of to-day is "at a low ebb." Mr.
"Dulc''A" "K Ni.cccth Cmtury," j. b. Lippimott Co. John La FarSe's Scammon lectures

Trather controversial smack to them,
HE FALL ART BOORS arc handsomely published under the title, "The

Higher Life in Art" (McClure). An excellent
David C. Preyer, well known for elementary text book is Sir Walter Armstrong's
his work in art criticism, brings a special "Art in Great Britain and Ireland" (Scribner's).
volUrne . knowledge of Dutch painting to the new The text is a model of condensation and the co-
of the°vin l'le Galleries of Europe series, "The Art pious extent of illustration in good small cuts is a
which 'and Galleries" (Page). The book, worthy achievement in publishing. The Great

SubjectdlnCS 'la^ a hundred illustrations, treats the Art Galleries series (Caldwell) offers a new volume
tatioa of p)^°a^ m historical sequence. A trans- on the Wallace Collection, containing sixty-four
teenl)i°rG-H. Marius's "Dutch Art in the Nine- illustrations with short notes. George Morland,
plates /r eiUury" is tastefully gotten up with 130 the English animal painter (1763-1804), shows
af0cu LPPlnc°tt). The Hague school is taken as Dutch influence in his fondness for domestic in-
the v ' Wlt'1 a c'osmS summary of the reaction by teriors and farming scenes. Sir Walter Gilbey,
's well 1 ^L>1 ^mstcrc'arn painters. The anecdote whose well-known interest in the horse and other
'n8 the 10Wn °^ ^° kargilliere's mistake in think- domestic animals has led him to add to his pub-
°stabli -1 ?Un^ Chardin's work a product of the lished writings several books on animal painters,
a pre ,1Ct ™emish school. Chardin, who, though has now in collaboration with E. D. Cuming issued
Sr°und • n' kut beat the Dutch on their own a biography and critical estimate of Morland (im-
in the ty[ su'Jject of one of the recent volumes ported by Macmillan) which is illustrated with
SuccessfuidSteilJ'CCeS 'n ^°^or se"es> a remarkably fifty full-page color plates. "Scotch Painting,
set of inexpensive color reproductions Past and Present, 1620-1908 " is the subject of a