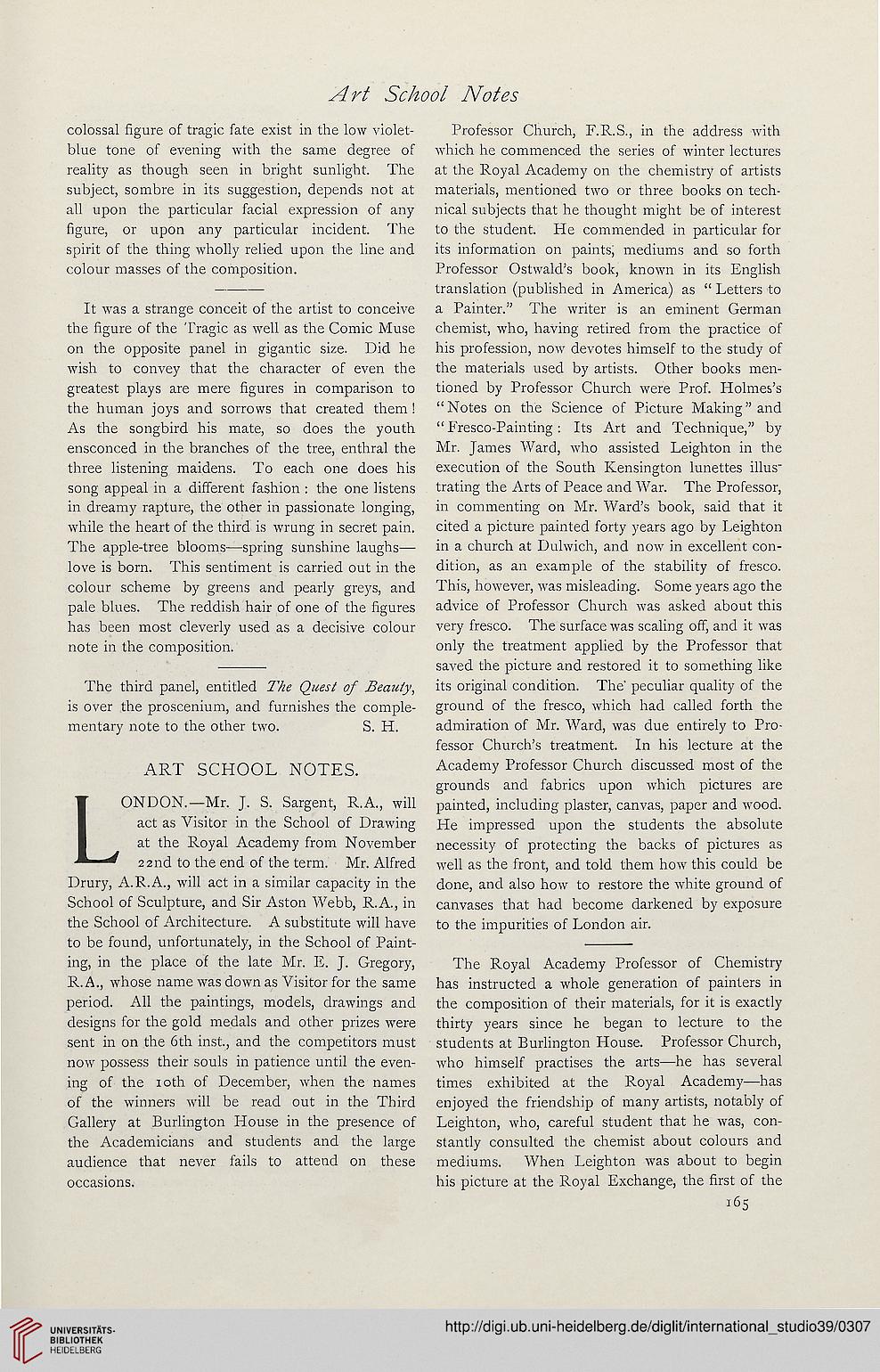 colossal figure of tragic fate exist in the low violet- Professor Church, F.R.S., in the address with
blue tone of evening with the same degree of which he commenced the series of winter lectures
reality as though seen in bright sunlight. The at the Royal Academy on the chemistry of artists
subject, sombre in its suggestion, depends not at materials, mentioned two or three books on tech-
all upon the particular facial expression of any nical subjects that he thought might be of interest
figure, or upon any particular incident. The to the student. He commended in particular for
spirit of the thing wholly relied upon the line and its information on paints, mediums and so forth
colour masses of the composition. Professor Ostwald's book, known in its English
---- translation (published in America) as " Letters to

It was a strange conceit of the artist to conceive a Painter." The writer is an eminent German
the figure of the Tragic as well as the Comic Muse chemist, who, having retired from the practice of
on the opposite panel in gigantic size. Did he his profession, now devotes himself to the study of
wish to convey that the character of even the the materials used by artists. Other books men-
greatest plays are mere figures in comparison to tioned by Professor Church were Prof. Holmes's
the human joys and sorrows that created them! "Notes on the Science of Picture Making" and
As the songbird his mate, so does the youth " Fresco-Painting : Its Art and Technique," by
ensconced in the branches of the tree, enthral the Mr. James Ward, who assisted Leighton in the
three listening maidens. To each one does his execution of the South Kensington lunettes illus"
song appeal in a different fashion : the one listens trating the Arts of Peace and War. The Professor,
in dreamy rapture, the other in passionate longing, in commenting on Mr. Ward's book, said that it
while the heart of the third is wrung in secret pain. cited a picture painted forty years ago by Leighton
The apple-tree blooms—spring sunshine laughs— in a church at Dulwich, and now in excellent con-
love is born. This sentiment is carried out in the dition, as an example of the stability of fresco,
colour scheme by greens and pearly greys, and This, however, was misleading. Some years ago the
pale blues. The reddish hair of one of the figures advice of Professor Church was asked about this
has been most cleverly used as a decisive colour very fresco. The surface was scaling off, and it was
note in the composition. only the treatment applied by the Professor that
- saved the picture and restored it to something like

The third panel, entitled The Quest of Beauty, its original condition. The' peculiar quality of the

is over the proscenium, and furnishes the comple- ground of the fresco, which had called forth the

mentary note to the other two. S. H. admiration of Mr. Ward, was due entirely to Pro-
fessor Church's treatment. In his lecture at the

ART SCHOOL NOTES Academy Professor Church discussed most of the

grounds and fabrics upon which pictures are

22nd to the end of the term. Mr. Alfred well as the front, and told them how this could be

Drury, A.R.A., will act in a similar capacity in the done, and also how to restore the white ground of

School of Sculpture, and Sir Aston Webb, R.A., in canvases that had become darkened by exposure

the School of Architecture. A substitute will have to the impurities of London air.

to be found, unfortunately, in the School of Paint- -

ing, in the place of the late Mr. E. J. Gregory, The Royal Academy Professor of Chemistry

R.A., whose name was down as Visitor for the same has instructed a whole generation of painters in

period. All the paintings, models, drawings and the composition of their materials, for it is exactly

sent in on the 6th inst, and the competitors must students at Burlington House. Professor Church,

ing of the 10th of December, when the names times exhibited at the Royal Academy—has

of the winners will be read out in the Third enjoyed the friendship of many artists, notably of

Gallery at Burlington House in the presence of Leighton, who, careful student that he was, con-

audience that never fails to attend on these mediums. When Leighton was about to begin

occasions. his picture at the Royal Exchange, the first of the