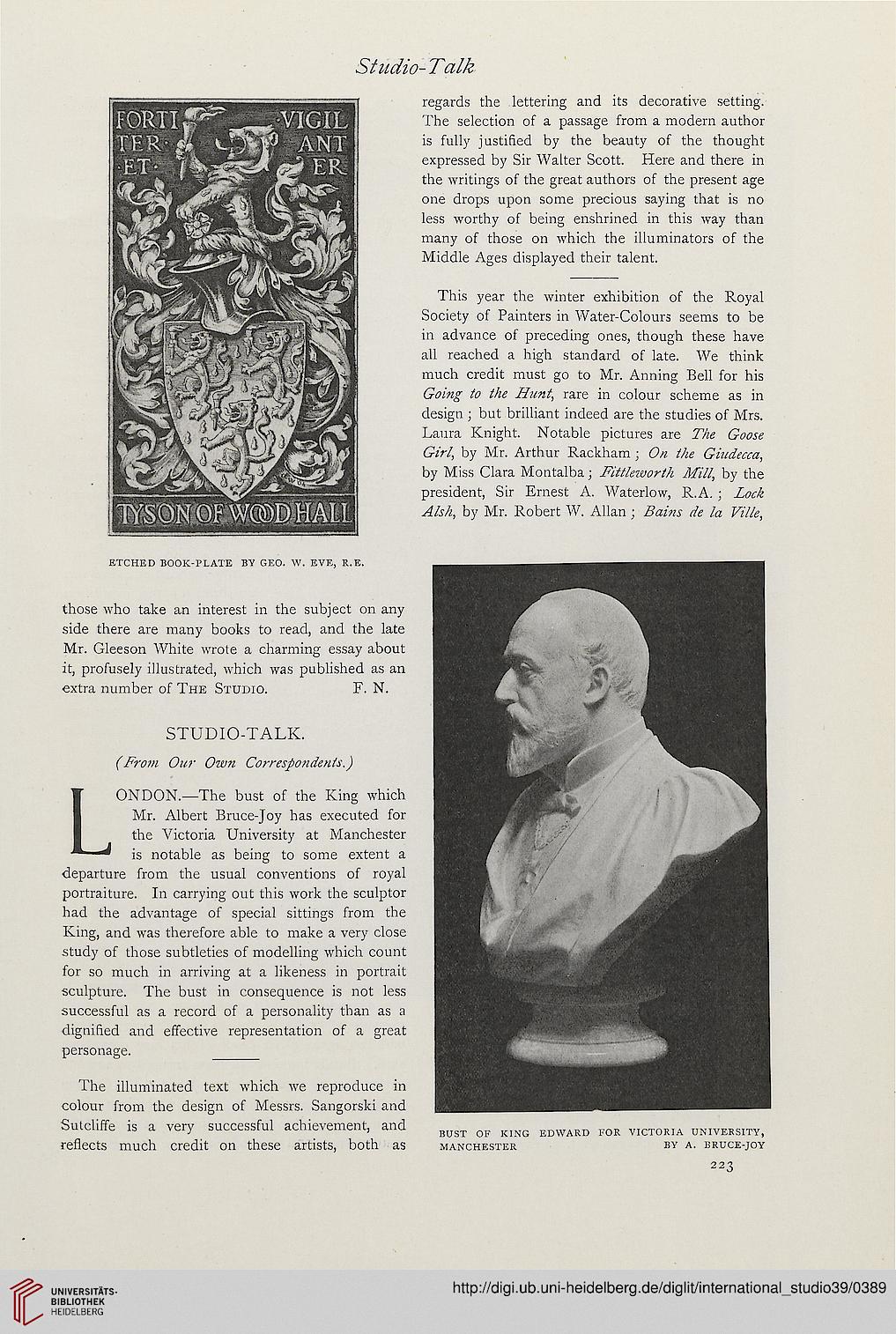 those who take an interest in the subject on any
side there are many books to read, and the late
Mr. Gleeson White wrote a charming essay about
it, profusely illustrated, which was published as an
extra number of The Studio. F. N.

LONDON.—The bust of the King which
Mr. Albert Bruce-Joy has executed for
the Victoria University at Manchester
is notable as being to some extent a
departure from the usual conventions of royal
portraiture. In carrying out this work the sculptor
had the advantage of special sittings from the
King, and was therefore able to make a very close
study of those subtleties of modelling which count
for so much in arriving at a likeness in portrait
sculpture. The bust in consequence is not less
successful as a record of a personality than as a
dignified and effective representation of a great
personage.

The illuminated text which we reproduce in
colour from the design of Messrs. Sangorski and
Sutcliffe is a very successful achievement, and
reflects much credit on these artists, both as

regards the lettering and its decorative setting.
The selection of a passage from a modern author
is fully justified by the beauty of the thought
expressed by Sir Walter Scott. Here and there in
the writings of the great authors of the present age
one drops upon some precious saying that is no
less worthy of being enshrined in this way than
many of those on which the illuminators of the
Middle Ages displayed their talent.

This year the winter exhibition of the Royal
Society of Painters in Water-Colours seems to be
in advance of preceding ones, though these have
all reached a high standard of late. We think
much credit must go to Mr. Anning Bell for his
Going to the Hunt, rare in colour scheme as in
design ; but brilliant indeed are the studies of Mrs.
Laura Knight. Notable pictures are The Goose
Girl, by Mr. Arthur Rackham ; On the Giudecca,
by Miss Clara Montalba; Fittleivorth Mill, by the
president, Sir Ernest A. Waterlow, R.A. ; Lock
AM, by Mr. Robert W. Allan ; Bains de la Ville,

BUST OF KING EDWARD FOR VICTORIA UNIVERSITY,
MANCHESTER BY A. BRUCE-JOY