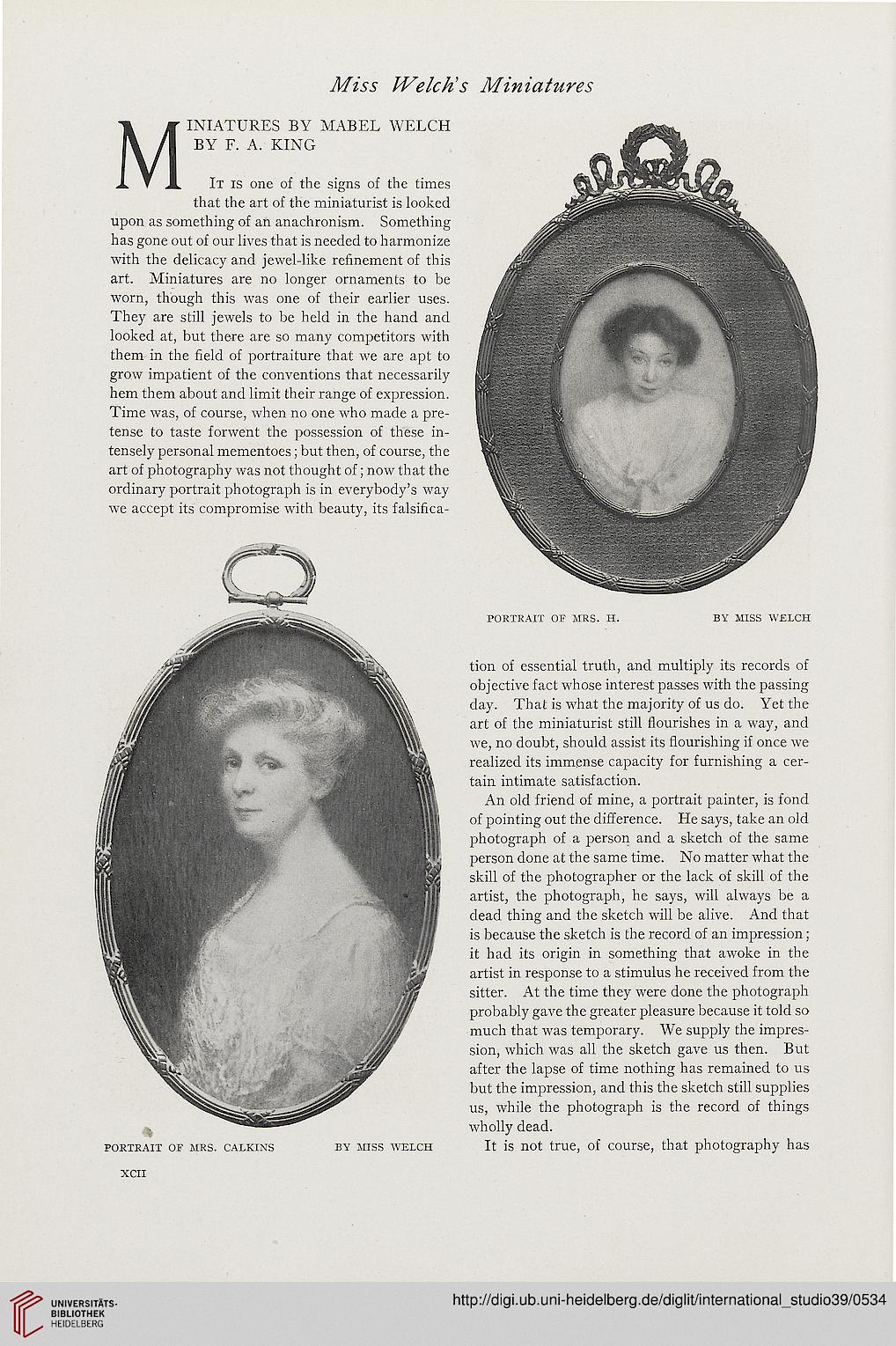 INIATURES BY MABEL WELCH
BY F. A. KING

It is one of the signs of the times
that the art of the miniaturist is looked
upon as something of an anachronism. Something
has gone out of our lives that is needed to harmonize
with the delicacy and jewel-like refinement of this
art. Miniatures are no longer ornaments to be
worn, though this was one of their earlier uses.
They are still jewels to be held in the hand and
looked at, but there are so many competitors with
them in the field of portraiture that we are apt to
grow impatient of the conventions that necessarily
hem them about and limit their range of expression.
Time was, of course, when no one who made a pre-
tense to taste forwent the possession of these in-
tensely personal mementoes; but then, of course, the
art of photography was not thought of; now that the
ordinary portrait photograph is in everybody's way
we accept its compromise with beauty, its falsifica-

tion of essential truth, and multiply its records of
objective fact whose interest passes with the passing
day. That is what the majority of us do. Yet the
art of the miniaturist still flourishes in a way, and
we, no doubt, should assist its flourishing if once we
realized its immense capacity for furnishing a cer-
tain intimate satisfaction.

An old friend of mine, a portrait painter, is fond
of pointing out the difference. He says, take an old
photograph of a person and a sketch of the same
person done at the same time. No matter what the
skill of the photographer or the lack of skill of the
artist, the photograph, he says, will always be a
dead thing and the sketch will be alive. And that
is because the sketch is the record of an impression;
it had its origin in something that awoke in the
artist in response to a stimulus he received from the
sitter. At the time they were done the photograph
probably gave the greater pleasure because it told so
much that was temporary. We supply the impres-
sion, which was all the sketch gave us then. But
after the lapse of time nothing has remained to us
but the impression, and this the sketch still supplies
us, while the photograph is the record of things
wholly dead.

It is not true, of course, that photography has