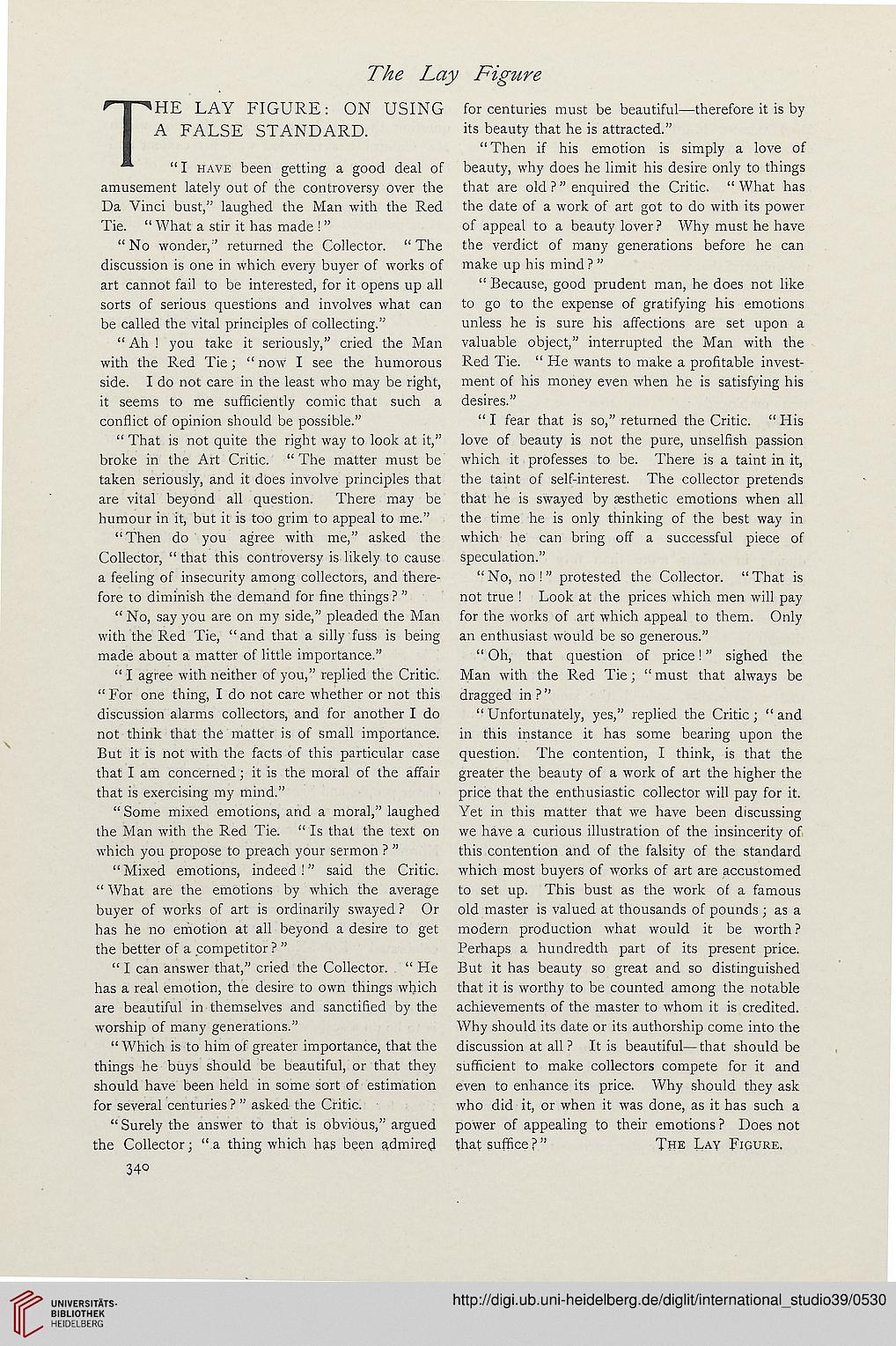 THE LAY FIGURE: ON USING
A FALSE STANDARD.
" I have been getting a good deal of
amusement lately out of the controversy over the
Da Vinci bust," laughed the Man with the Red
Tie. " What a stir it has made ! "

"No wonder/' returned the Collector. "The
discussion is one in which every buyer of works of
art cannot fail to be interested, for it opens up all
sorts of serious questions and involves what can
be called the vital principles of collecting."

" Ah ! you take it seriously," cried the Man
with the Red Tie; " now I see the humorous
side. I do not care in the least who may be right,
it seems to me sufficiently comic that such a
conflict of opinion should be possible."

" That is not quite the right way to look at it,"
broke in the Art Critic. "The matter must be
taken seriously, and it does involve principles that
are vital beyond all question. There may be
humour in it, but it is too grim to appeal to me."

"Then do you agree with me," asked the
Collector, " that this controversy is likely to cause
a feeling of insecurity among collectors, and there-
fore to diminish the demand for fine things ? "

" No, say you are on my side," pleaded the Man
with the Red Tie, "and that a silly fuss is being
made about a matter of little importance."

" I agree with neither of you," replied the Critic.
" For one thing, I do not care whether or not this
discussion alarms collectors, and for another I do
not think that the matter is of small importance.
But it is not with the facts of this particular case
that I am concerned; it is the moral of the affair
that is exercising my mind."

" Some mixed emotions, and a moral," laughed
the Man with the Red Tie. " Is that the text on
which you propose to preach your sermon ? "

" Mixed emotions, indeed!" said the Critic.
" What are the emotions by which the average
buyer of works of art is ordinarily swayed ? Or
has he no emotion at all beyond a desire to get
the better of a competitor ? "

" I can answer that," cried the Collector. " He
has a real emotion, the desire to own things which
are beautiful in themselves and sanctified by the
worship of many generations."

" Which is to him of greater importance, that the
things he buys should be beautiful, or that they
should have been held in some sort of estimation
for several centuries ? " asked the Critic.

"Surely the answer to that is obvious," argued
the Collector; "a thing which has been admired

for centuries must be beautiful—therefore it is by
its beauty that he is attracted."

"Then if his emotion is simply a love of
beauty, why does he limit his desire only to things
that are old ? " enquired the Critic. " What has
the date of a work of art got to do with its power
of appeal to a beauty lover? Why must he have
the verdict of many generations before he can
make up his mind ? "

" Because, good prudent man, he does not like
to go to the expense of gratifying his emotions
unless he is sure his affections are set upon a
valuable object," interrupted the Man with the
Red Tie. " He wants to make a profitable invest-
ment of his money even when he is satisfying his
desires."

"I fear that is so," returned the Critic. "His
love of beauty is not the pure, unselfish passion
which it professes to be. There is a taint in it,
the taint of self-interest. The collector pretends
that he is swayed by aesthetic emotions when all
the time he is only thinking of the best way in
which he can bring off a successful piece of
speculation."

"No, no!" protested the Collector. "That is
not true ! Look at the prices which men will pay
for the works of art which appeal to them. Only
an enthusiast would be so generous."

" Oh, that question of price!" sighed the
Man with the Red Tie; " must that always be
dragged in ? "

"Unfortunately, yes," replied the Critic; "and
in this instance it has some bearing upon the
question. The contention, I think, is that the
greater the beauty of a work of art the higher the
price that the enthusiastic collector will pay for it.
Yet in this matter that we have been discussing
we have a curious illustration of the insincerity of
this contention and of the falsity of the standard
which most buyers of works of art are accustomed
to set up. This bust as the work of a famous
old master is valued at thousands of pounds ; as a
modern production what would it be worth ?
Perhaps a hundredth part of its present price.
But it has beauty so great and so distinguished
that it is worthy to be counted among the notable
achievements of the master to whom it is credited.
Why should its date or its authorship come into the
discussion at all ? It is beautiful—that should be
sufficient to make collectors compete for it and
even to enhance its price. Why should they ask
who did it, or when it was done, as it has such a
power of appealing to their emotions ? Does not
that suffice ? " The Lay Figure.