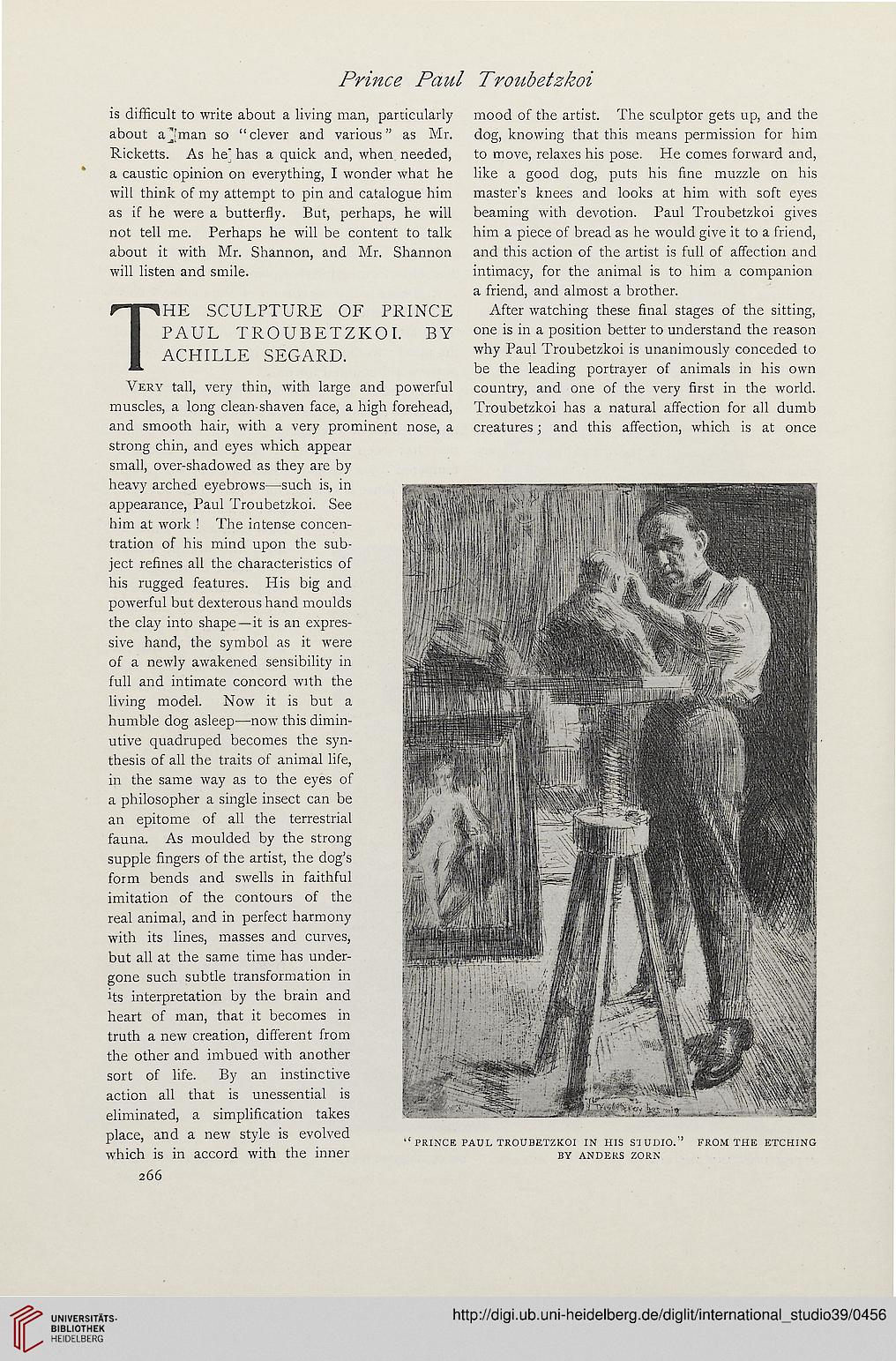 is difficult to write about a living man, particularly mood of the artist. The sculptor gets up, and the
about a''man so "clever and various" as Mr. dog, knowing that this means permission for him
Ricketts. As he" has a quick and, when needed, to move, relaxes his pose. He comes forward and,
a caustic opinion on everything, I wonder what he like a good dog, puts his fine muzzle on his
will think of my attempt to pin and catalogue him master's knees and looks at him with soft eyes
as if he were a butterfly. But, perhaps, he will beaming with devotion. Paul Troubetzkoi gives
not tell me. Perhaps he will be content to talk him a piece of bread as he would give it to a friend,
about it with Mr. Shannon, and Mr. Shannon and this action of the artist is full of affection and
will listen and smile. intimacy, for the animal is to him a companion

a friend, and almost a brother.

THE SCULPTURE OF PRINCE After watching these final stages of the sitting,
PAUL TROUBETZKOI. BY one is in a position better to understand the reason
ACHILLE SEGARD -Paul Troubetzkoi is unanimously conceded to

be the leading portrayer of animals in his own
Very tall, very thin, with large and powerful country, and one of the very first in the world,
muscles, a long clean-shaven face, a high forehead, Troubetzkoi has a natural affection for all dumb
and smooth hair, with a very prominent nose, a creatures; and this affection, which is at once
strong chin, and eyes which appear
small, over-shadowed as they are by
heavy arched eyebrows—such is, in
appearance, Paul Troubetzkoi. See
him at work ! The intense concen-
tration of his mind upon the sub-
ject refines all the characteristics of
his rugged features. His big and
powerful but dexterous hand moulds
the clay into shape—it is an expres-
sive hand, the symbol as it were
of a newly awakened sensibility in
full and intimate concord with the
living model. Now it is but a
humble dog asleep—now this dimin-
utive quadruped becomes the syn-
thesis of all the traits of animal life,
in the same way as to the eyes of
a philosopher a single insect can be
an epitome of all the terrestrial
fauna. As moulded by the strong
supple fingers of the artist, the dog's
form bends and swells in faithful
imitation of the contours of the
real animal, and in perfect harmony
with its lines, masses and curves,
but all at the same time has under-
gone such subtle transformation in
its interpretation by the brain and
heart of man, that it becomes in
truth a new creation, different from
the other and imbued with another
sort of life. By an instinctive
action all that is unessential is
eliminated, a simplification takes
nlace, and a new style is evolved .,

Fia^> J _ " prince paul troubetzkoi in his studio. from the etching

which is in accord with the inner by anders zorn