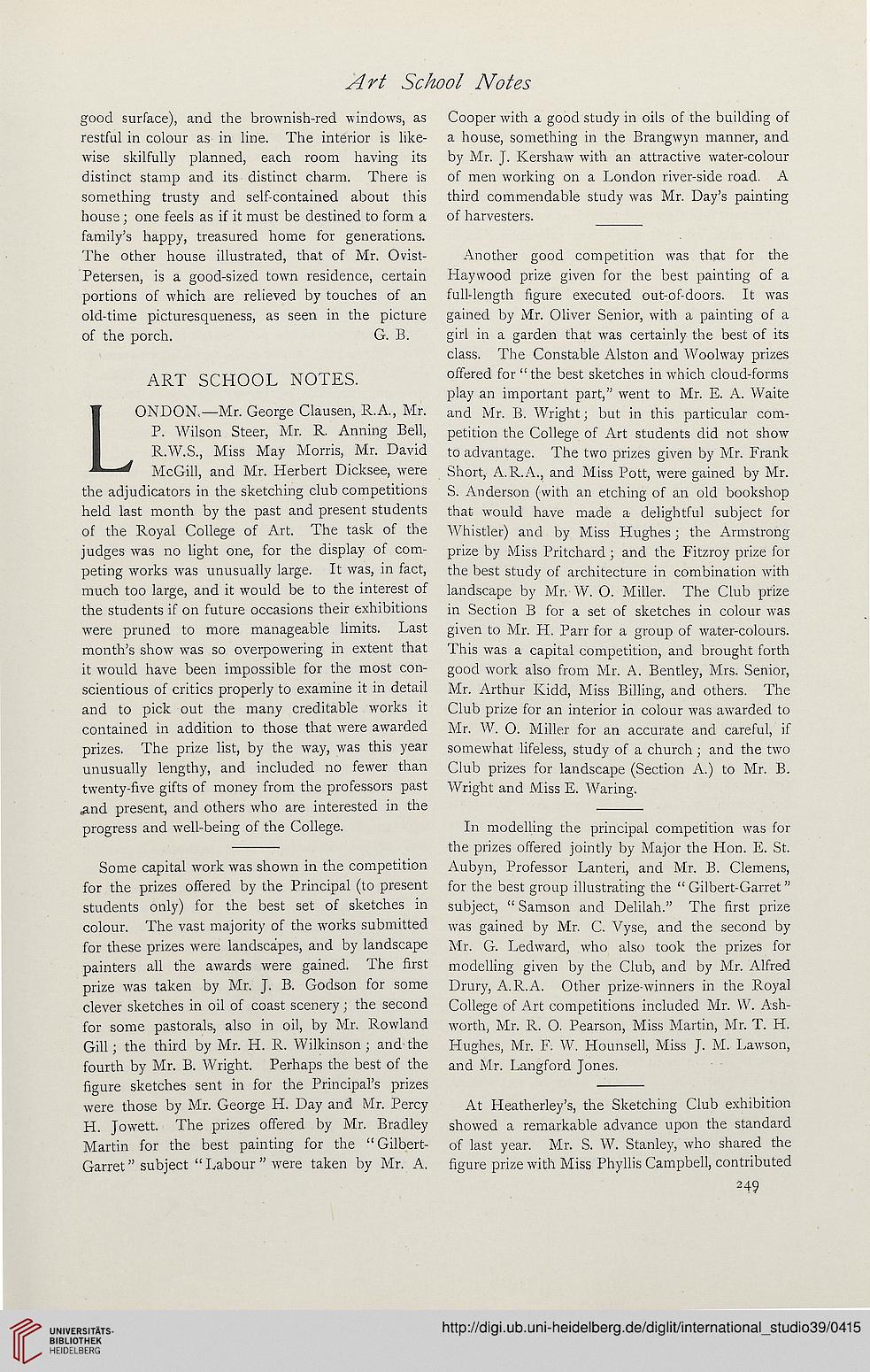 good surface), and the brownish-red windows, as
restful in colour as in line. The interior is like-
wise skilfully planned, each room having its
distinct stamp and its distinct charm. There is
something trusty and self-contained about this
house; one feels as if it must be destined to form a
family's happy, treasured home for generations.
The other house illustrated, that of Mr. Ovist-
Petersen, is a good-sized town residence, certain
portions of which are relieved by touches of an
old-time picturesqueness, as seen in the picture
of the porch. G. B.

LONDON.—Mr. George Clausen, R.A., Mr.
P. Wilson Steer, Mr. R. Anning Bell,
R.W.S., Miss May Morris, Mr. David
McGill, and Mr. Herbert Dicksee, were
the adjudicators in the sketching club competitions
held last month by the past and present students
of the Royal College of Art. The task of the
judges was no light one, for the display of com-
peting works was unusually large. It was, in fact,
much too large, and it would be to the interest of
the students if on future occasions their exhibitions
were pruned to more manageable limits. Last
month's show was so overpowering in extent that
it would have been impossible for the most con-
scientious of critics properly to examine it in detail
and to pick out the many creditable works it
contained in addition to those that were awarded
prizes. The prize list, by the way, was this year
unusually lengthy, and included no fewer than
twenty-five gifts of money from the professors past
.and present, and others who are interested in the
progress and well-being of the College.

Some capital work was shown in the competition
for the prizes offered by the Principal (to present
students only) for the best set of sketches in
colour. The vast majority of the works submitted
for these prizes were landscapes, and by landscape
painters all the awards were gained. The first
prize was taken by Mr. J. B. Godson for some
clever sketches in oil of coast scenery ; the second
for some pastorals, also in oil, by Mr. Rowland
Gill; tne tnir(i bY Mr- H- R- Wilkinson; and-the
fourth by Mr. B. Wright. Perhaps the best of the
figure sketches sent in for the Principal's prizes
were those by Mr. George H. Day and Mr. Percy
H. Jowett. The prizes offered by Mr. Bradley
Martin for the best painting for the "Gilbert-
Garret " subject " Labour " were taken by Mr. A.

Cooper with a good study in oils of the building of
a house, something in the Brangwyn manner, and
by Mr. J. Kershaw with an attractive water-colour
of men working on a London river-side road. A
third commendable study was Mr. Day's painting
of harvesters.

Another good competition was that for the
Haywood prize given for the best painting of a
full-length figure executed out-of-doors. It was
gained by Mr. Oliver Senior, with a painting of a
girl in a garden that was certainly the best of its
class. The Constable Alston and Woolway prizes
offered for "the best sketches in which cloud-forms
play an important part," went to Mr. E. A. Waite
and Mr. B. Wright; but in this particular com-
petition the College of Art students did not show
to advantage. The two prizes given by Mr. Frank
Short, A.R.A., and Miss Pott, were gained by Mr.
S. Anderson (with an etching of an old bookshop
that would have made a delightful subject for
Whistler) and by Miss Hughes; the Armstrong
prize by Miss Pritchard ; and the Fitzroy prize for
the best study of architecture in combination with
landscape by Mr. W. O. Miller. The Club prize
in Section B for a set of sketches in colour was
given to Mr. H. Parr for a group of water-colours.
This was a capital competition, and brought forth
good work also from Mr. A. Bentley, Mrs. Senior,
Mr. Arthur Kidd, Miss Billing, and others. The
Club prize for an interior in colour was awarded to
Mr. W. O. Miller for an accurate and careful, if
somewhat lifeless, study of a church ; and the two
Club prizes for landscape (Section A.) to Mr. B.
Wright and Miss E. Waring.

In modelling the principal competition was for
the prizes offered jointly by Major the Hon. E. St.
Aubyn, Professor Lanteri, and Mr. B. Clemens,
for the best group illustrating the "Gilbert-Garret"
subject, " Samson and Delilah." The first prize
was gained by Mr. C. Vyse, and the second by
Mr. G. Ledward, who also took the prizes for
modelling given by the Club, and by Mr. Alfred
Drury, A.R.A. Other prize-winners in the Royal
College of Art competitions included Mr. W. Ash-
worth, Mr. R. O. Pearson, Miss Martin, Mr. T. H.
Hughes, Mr. F. W. Hounsell, Miss J. M. Lawson,
and Mr. Langford Jones.

At Heatherley's, the Sketching Club exhibition
showed a remarkable advance upon the standard
of last year. Mr. S. W. Stanley, who shared the
figure prize with Miss Phyllis Campbell, contributed