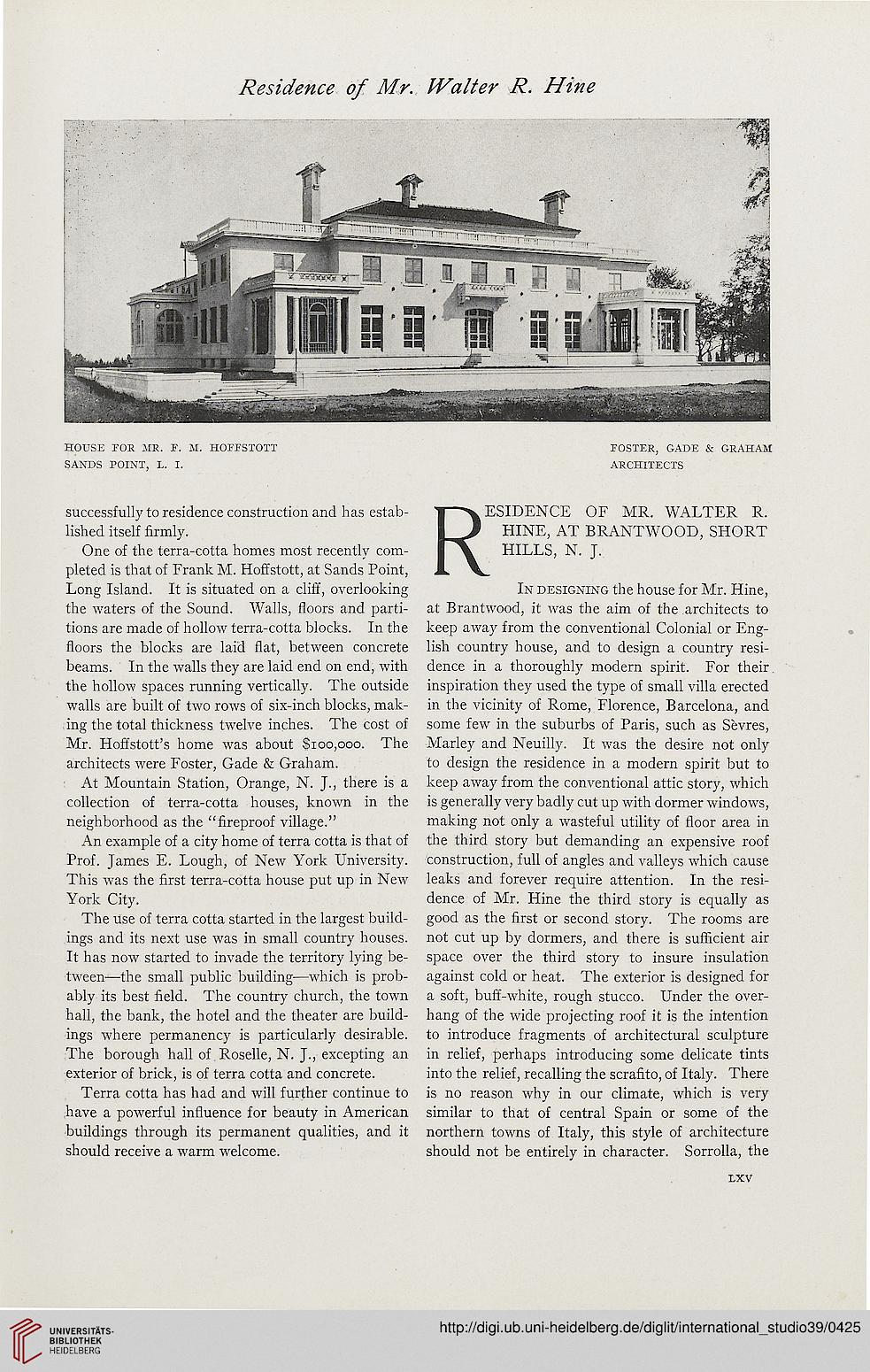 successfully to residence construction and has estab- "|—RESIDENCE OF MR. WALTER R.

lished itself firmly. I J HINE, AT BRANTWOOD, SHORT

One of the terra-cotta homes most recently com- HILLS, N. J.

pleted is that of Frank M. Hoffstott, at Sands Point,
Long Island. It is situated on a cliff, overlooking In designing the house for Mr. Hine,

the waters of the Sound. Walls, floors and parti- at Brantwood, it was the aim of the architects to

tions are made of hollow terra-cotta blocks. In the keep away from the conventional Colonial or Eng-

floors the blocks are laid flat, between concrete lish country house, and to design a country resi-

beams. In the walls they are laid end on end, with dence in a thoroughly modern spirit. For their,

the hollow spaces running vertically. The outside inspiration they used the type of small villa erected

walls are built of two rows of six-inch blocks, mak- in the vicinity of Rome, Florence, Barcelona, and

ing the total thickness twelve inches. The cost of some few in the suburbs of Paris, such as Sevres,

Mr. Hoffstott's home was about $100,000. The Marley and Neuilly. It was the desire not only

architects were Foster, Gade & Graham. to design the residence in a modern spirit but to

At Mountain Station, Orange, N. J., there is a keep away from the conventional attic story, which

collection of terra-cotta houses, known in the is generally very badly cut up with dormer windows,

neighborhood as the "fireproof village." making not only a wasteful utility of floor area in

Prof. James E. Lough, of New York University, construction, full of angles and valleys which cause

This was the first terra-cotta house put up in New leaks and forever require attention. In the resi-

York City. dence of Mr. Hine the third story is equally as

The use of terra cotta started in the largest build- good as the first or second story. The rooms are
ings and its next use was in small country houses, not cut up by dormers, and there is sufficient air
It has now started to invade the territory lying be- space over the third story to insure insulation
tween—the small public building—which is prob- against cold or heat. The exterior is designed for
ably its best field. The country church, the town a soft, buff-white, rough stucco. Under the over-
hall, the bank, the hotel and the theater are build- hang of the wide projecting roof it is the intention
ings where permanency is particularly desirable, to introduce fragments of architectural sculpture
The borough hall of Roselle, N. J., excepting an in relief, perhaps introducing some delicate tints
exterior of brick, is of terra cotta and concrete. into the relief, recalling the scrafito, of Italy. There

Terra cotta has had and will further continue to is no reason why in our climate, which is very

buildings through its permanent qualities, and it northern towns of Italy, this style of architecture

should receive a warm welcome. should not be entirely in character. Sorrolla, the