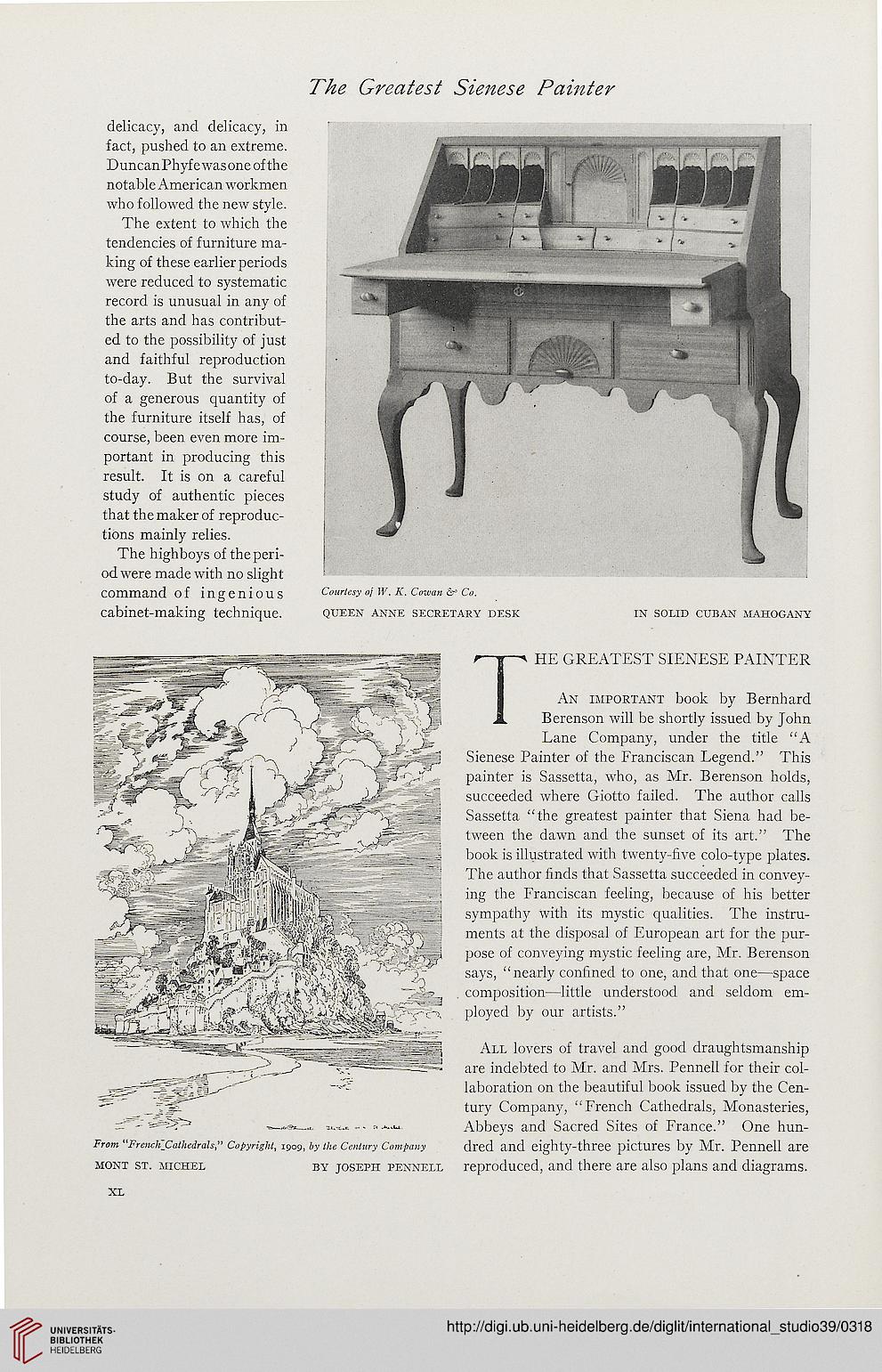 fact, pushed to an extreme.

The extent to which the
tendencies of furniture ma-

king of these earlier periods

record is unusual in any of
the arts and has contribut-
ed to the possibility of just
and faithful reproduction HH
to-day. But the survival j J

of a generous quantity of ^tt^
the furniture itself has, of . m

course, been even more im-
portant in producing this 9
result. It is on a careful M M

study of authentic pieces •
that the maker of reproduc- ,jf
tions mainly relies.

The highboys of the peri-
od were made with no slight

An important book by Bernhard
Berenson will be shortly issued by John
Lane Company, under the title "A
Sienese Painter of the Franciscan Legend." This
painter is Sassetta, who, as Mr. Berenson holds,
succeeded where Giotto failed. The author calls
Sassetta "the greatest painter that Siena had be-
tween the dawn and the sunset of its art." The
book is illustrated with twenty-five colo-type plates.
The author finds that Sassetta succeeded in convey-
ing the Franciscan feeling, because of his better
sympathy with its mystic qualities. The instru-
ments at the disposal of European art for the pur-
pose of conveying mystic feeling are, Mr. Berenson
says, "nearly confined to one, and that one—space
composition—little understood and seldom em-
^i i^^'-fe^fe1^ ' ■* l>'«»yc(l by our artists."

••" • ; All lovers of travel and good draughtsmanship

-~52Sixz are indebted to Mr. and Mrs. Pennell for their col-

laboration on the beautiful book issued by the Cen-
tury Company, "French Cathedrals, Monasteries,
r^^'^S?^ =.^^ Abbeys and Sacred Sites of France." One hun-

From "French'Cathedrah," Copyright, 1909, by the Century Company dred and eighty-three pictures by Mr. Pennell are
mont st. michel by Joseph pennell reproduced, and there are also plans and diagrams.