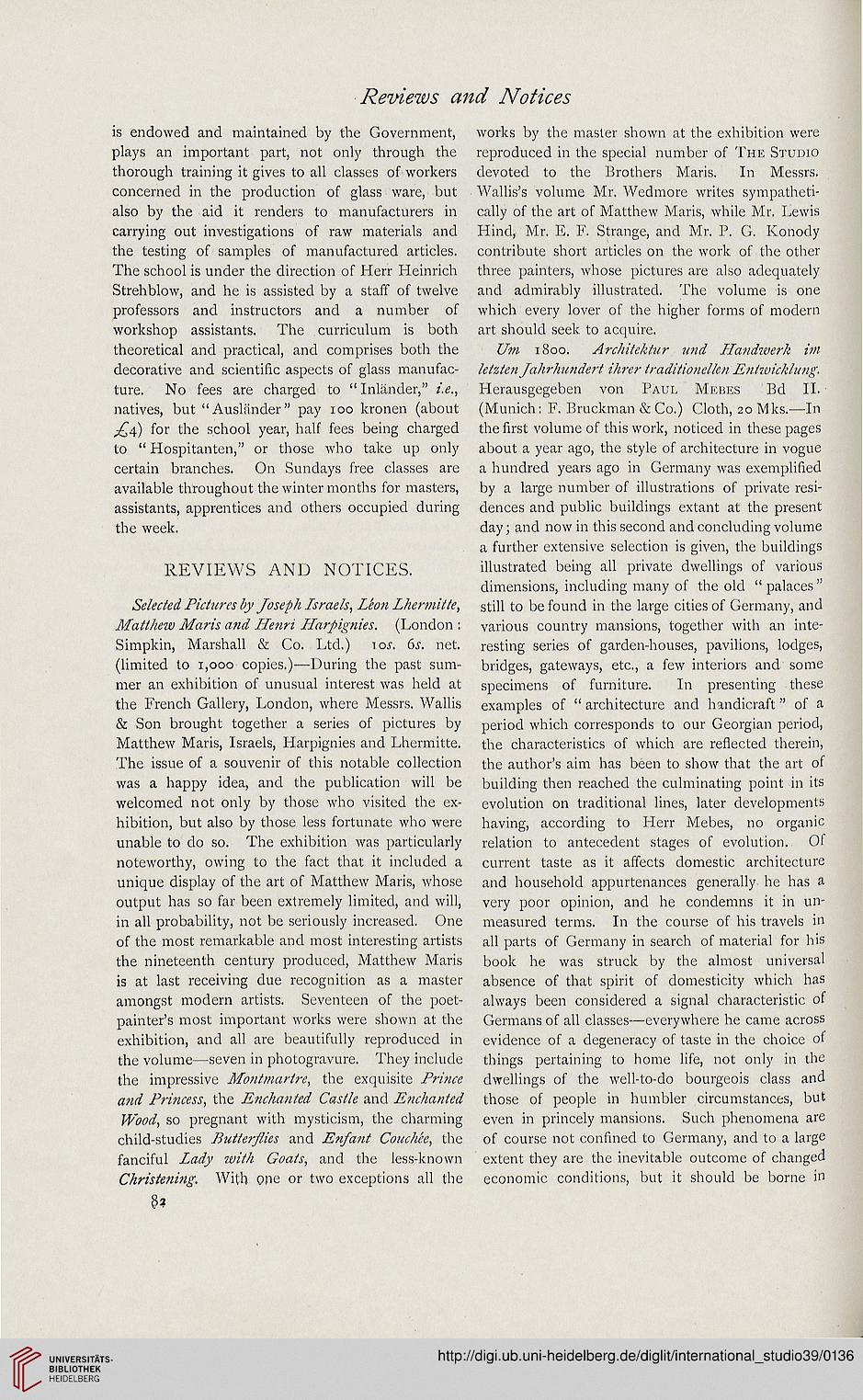 is endowed and maintained by the Government, works by the master shown at the exhibition were

plays an important part, not only through the reproduced in the special number of The Studio

thorough training it gives to all classes of workers devoted to the Brothers Maris. In Messrs.

also by the aid it renders to manufacturers in cally of the art of Matthew Maris, while Mr. Lewis

the testing of samples of manufactured articles, contribute short articles on the work of the other

The school is under the direction of Herr Heinrich three painters, whose pictures are also adequately

Strehblow, and he is assisted by a staff of twelve and admirably illustrated. The volume is one

workshop assistants. The curriculum is both art should seek to acquire.

theoretical and practical, and comprises both the Um 1800. Architcktur und Handnverk im

£4) for the school year, half fees being charged the first volume of this work, noticed in these pages

to " Hospitanten," or those who take up only about a year ago, the style of architecture in vogue

certain branches. On Sundays free classes are a hundred years ago in Germany was exemplified

available throughout the winter months for masters, by a large number of illustrations of private resi-

assistants, apprentices and others occupied during dences and public buildings extant at the present

the week. day; and now in this second and concluding volume

a further extensive selection is given, the buildings

REVIEWS AND NOTICES. illustrated being all private dwellings of various

dimensions, including many of the old "palaces"

Selected Pictures by Joseph Israels, Lion Lhermitle, still to be found in the large cities of Germany, and

Mattheiv Maris and Henri Harpignies. (London : various country mansions, together with an inte-

(limited to 1,000 copies.)—During the past sum- bridges, gateways, etc., a few interiors and some

mer an exhibition of unusual interest was held at specimens of furniture. In presenting these

the French Gallery, London, where Messrs. Wallis examples of " architecture and handicraft " of a

& Son brought together a series of pictures by period which corresponds to our Georgian period,

Matthew Maris, Israels, Harpignies and Lhermitte. the characteristics of which are reflected therein,

was a happy idea, and the publication will be building then reached the culminating point in its

welcomed not only by those who visited the ex- evolution on traditional lines, later developments

hibition, but also by those less fortunate who were having, according to Herr Mebes, no Organic

unable to do so. The exhibition was particularly relation to antecedent stages of evolution. 01

noteworthy, owing to the fact that it included a current taste as it affects domestic architecture

unique display of the art of Matthew Maris, whose and household appurtenances generally he has a

output has so far been extremely limited, and will, very poor opinion, and he condemns it in un-

in all probability, not be seriously increased. One measured terms. In the course of his travels in

the nineteenth century produced, Matthew Maris book he was struck by the almost universal

amongst modern artists. Seventeen of the poet- always been considered a signal characteristic of

exhibition, and all are beautifully reproduced in evidence of a degeneracy of taste in the choice of

the volume—seven in photogravure. They include things pertaining to home life, not only in the

the impressive Montmarire, the exquisite Prince dwellings of the well-to-do bourgeois class and

and Princess, the Enchanted Castle and Enchanted those of people in humbler circumstances, but

Wood, so pregnant with mysticism, the charming even in princely mansions. Such phenomena are

child-studies Butter/lies and Enfant Couchie, the of course not confined to Germany, and to a large

fanciful Lady with Goats, and the less-known extent they are the inevitable outcome of changed

Christening. With One or two exceptions all the economic conditions, but it should be borne in