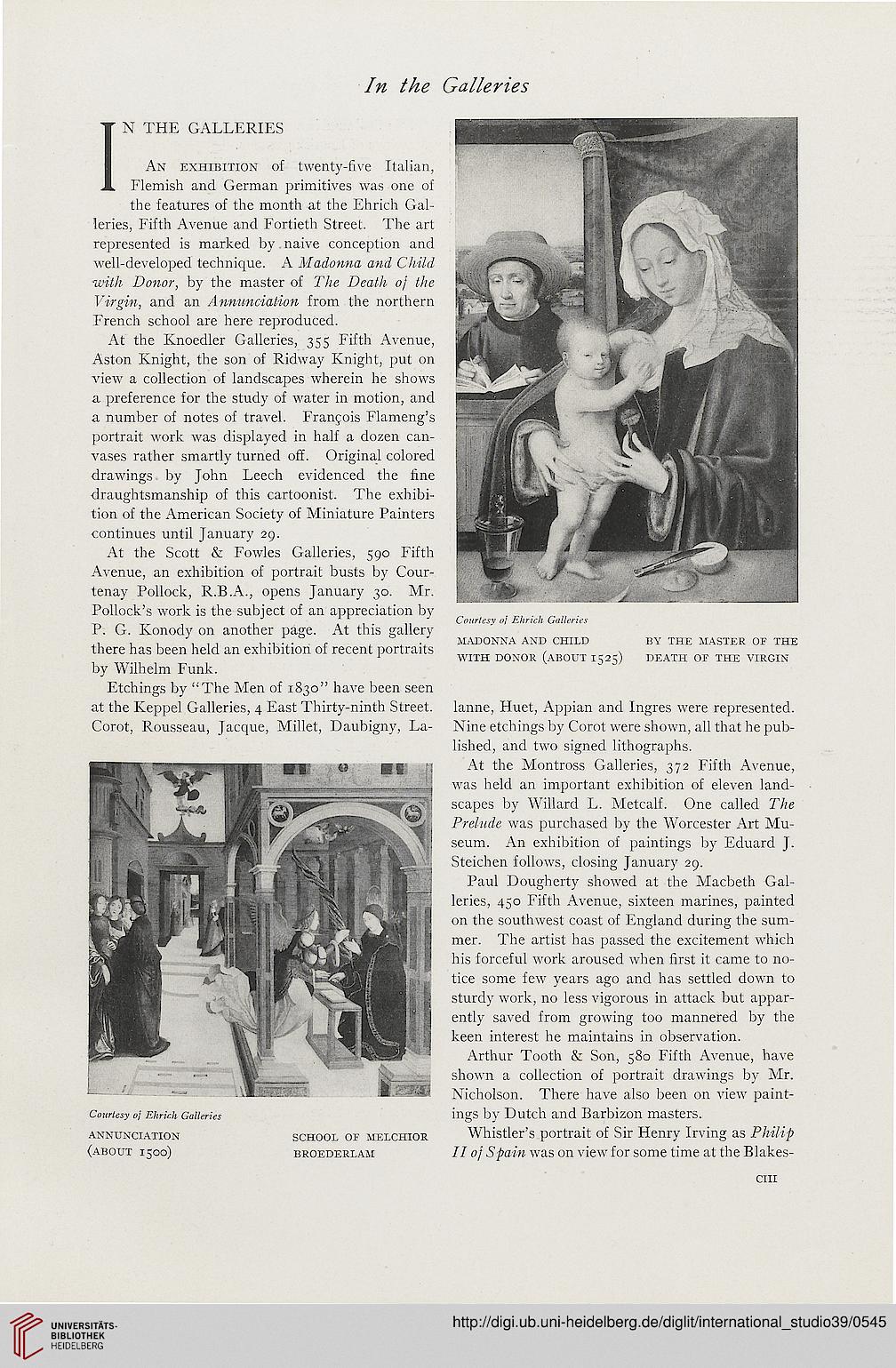 IN THE GALLERIES
An exhibition of twenty-five Italian,
Flemish and German primitives was one of
the features of the month at the Ehrich Gal-
leries, Fifth Avenue and Fortieth Street. The art
represented is marked by naive conception and
well-developed technique. A Madonna and Child
■with Donor, by the master of The Death oj the
Virgin, and an Annunciation from the northern
French school are here reproduced.

At the Knoedler Galleries, 355 Fifth Avenue,
Aston Knight, the son of Ridway Knight, put on
view a collection of landscapes wherein he shows
a preference for the study of water in motion, and
a number of notes of travel. Francois Flameng's
portrait work was displayed in half a dozen can-
vases rather smartly turned off. Original colored
drawings by John Leech evidenced the fine
draughtsmanship of this cartoonist. The exhibi-
tion of the American Society of Miniature Painters
continues until January 29.

At the Scott & Fowles Galleries, 590 Fifth
Avenue, an exhibition of portrait busts by Cour-
tenay Pollock, R.B.A., opens January 30. Mr.
Pollock's work is the subject of an appreciation by
P. G. Konody on another page. At this gallery
there has been held an exhibition of recent portraits
by Wilhelm Funk.

Etchings by "The Men of 1830" have been seen
at the Keppel Galleries, 4 East Thirty-ninth Street.
Corot, Rousseau, Jacque, Millet, Daubigny, La-

madonna and child by the master of the

lanne, Huet, Appian and Ingres were represented.
Nine etchings by Corot were shown, all that he pub-
lished, and two signed lithographs.

At the Montross Galleries, 372 Fifth Avenue,
was held an important exhibition of eleven land-
scapes by Willard L. Metcalf. One called The
Prelude was purchased by the Worcester Art Mu-
seum. An exhibition of paintings by Eduard J.
Steichen follows, closing January 29.

Paul Dougherty showed at the Macbeth Gal-
leries, 450 Fifth Avenue, sixteen marines, painted
on the southwest coast of England during the sum-
mer. The artist has passed the excitement which
his forceful work aroused when first it came to no-
tice some few years ago and has settled down to
sturdy work, no less vigorous in attack but appar-
ently saved from growing too mannered by the
keen interest he maintains in observation.

Arthur Tooth & Son, 580 Fifth Avenue, have
shown a collection of portrait drawings by Mr.
Nicholson. There have also been on view paint-
ings by Dutch and Barbizon masters.