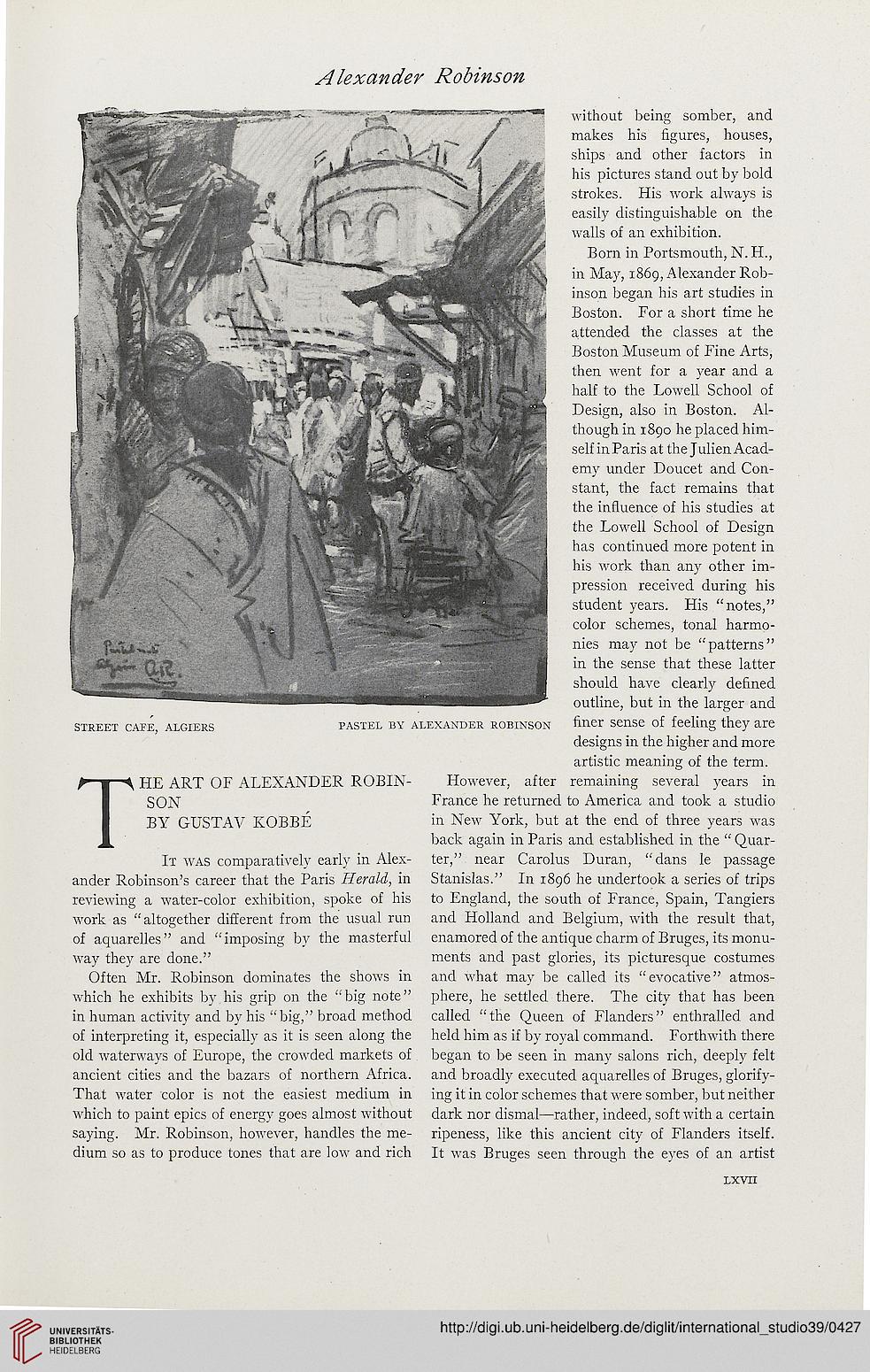 without being somber, and
makes his figures, houses,
ships and other factors in
his pictures stand out by bold
strokes. His work always is
easily distinguishable on the
walls of an exhibition.

Born in Portsmouth, N. H.,
in May, 1869, Alexander Rob-
inson began his art studies in
Boston. For a short time he
attended the classes at the
Boston Museum of Fine Arts,
then went for a year and a
half to the Lowell School of
Design, also in Boston. Al-
though in 1890 he placed him-
self in Paris at the Julien Acad-
emy under Doucet and Con-
stant, the fact remains that
the influence of his studies at
the Lowell School of Design
has continued more potent in
his work than any other im-
pression received during his
student years. His "notes,"
color schemes, tonal harmo-
nies may not be "patterns"
in the sense that these latter
should have clearly defined
outline, but in the larger and
street cafe, Algiers pastel by Alexander robinson finer sense of feeling they are

designs in the higher and more
artistic meaning of the term.

THE ART OF ALEXANDER ROBIN- However, after remaining several years in
SON France he returned to America and took a studio

BY GUSTAV KOBBE in New York, but at the end of three years was

back again in Paris and established in the " Quar-
It was comparatively early in Alex- ter," near Carolus Duran, "dans le passage
ander Robinson's career that the Paris Herald, in Stanislas." In 1896 he undertook a series of trips
reviewing a water-color exhibition, spoke of his to England, the south of France, Spain, Tangiers
work as "altogether different from the usual run and Holland and Belgium, with the result that,
of aquarelles" and "imposing by the masterful enamored of the antique charm of Bruges, its monu-
way they are done." ments and past glories, its picturesque costumes

Often Mr. Robinson dominates the shows in and what may be called its "evocative" atmos-
which he exhibits by his grip on the "big note" phere, he settled there. The city that has been
in human activity and by his "big," broad method called "the Queen of Flanders" enthralled and
of interpreting it, especially as it is seen along the held him as if by royal command. Forthwith there
old waterways of Europe, the crowded markets of began to be seen in many salons rich, deeply felt
ancient cities and the bazars of northern Africa, and broadly executed aquarelles of Bruges, glorify-
That water color is not the easiest medium in ing it in color schemes that were somber, but neither
which to paint epics of energy goes almost without dark nor dismal—rather, indeed, soft with a certain
saying. Mr. Robinson, however, handles the me- ripeness, like this ancient city of Flanders itself,
dium so as to produce tones that are low and rich It was Bruges seen through the eyes of an artist