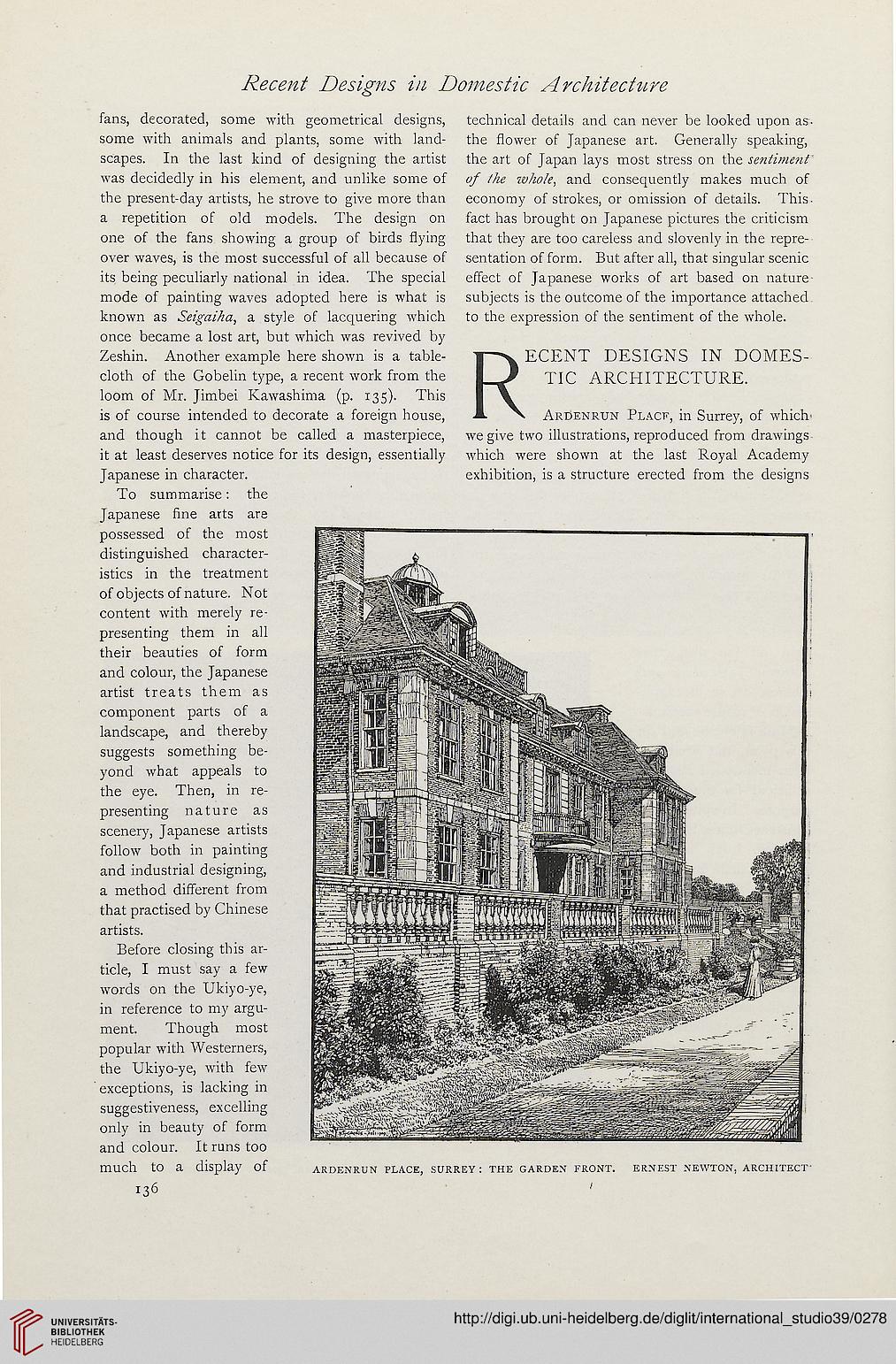 fans, decorated, some with geometrical designs, technical details and can never be looked upon as-
some with animals and plants, some with land- the flower of Japanese art. Generally speaking,
scapes. In the last kind of designing the artist the art of Japan lays most stress on the sentiment'
was decidedly in his element, and unlike some of of the whole, and consequently makes much of
the present-day artists, he strove to give more than economy of strokes, or omission of details. This-
a repetition of old models. The design on fact has brought on Japanese pictures the criticism
one of the fans showing a group of birds flying that they are too careless and slovenly in the repre-
over waves, is the most successful of all because of sentation of form. But after all, that singular scenic
its being peculiarly national in idea. The special effect of Japanese works of art based on nature
mode of painting waves adopted here is what is subjects is the outcome of the importance attached,
known as Seigaiha, a style of lacquering which to the expression of the sentiment of the whole,
once became a lost art, but which was revived by

Zeshin. Another example here shown is a table- ECENT DESIGNS IN DOMES-

cloth of the Gobelin type, a recent work from the I 3 TIC ARCHITECTURE,
loom of Mr. Jimbei Kawashima (p. 135). This \

is of course intended to decorate a foreign house, M. X Ardenrun Placf, in Surrey, of which'
and though it cannot be called a masterpiece, we give two illustrations, reproduced from drawings
it at least deserves notice for its design, essentially which were shown at the last Royal Academy
Japanese in character. exhibition, is a structure erected from the designs

To summarise: the
Japanese fine arts are
possessed of the most
distinguished character-
istics in the treatment
of objects of nature. Not
content with merely re-
presenting them in all
their beauties of form
and colour, the Japanese
artist treats them as
component parts of a
landscape, and thereby
suggests something be-
yond what appeals to
the eye. Then, in re-
presenting nature as
scenery, Japanese artists
follow both in painting
and industrial designing,
a method different from
that practised by Chinese
artists.

Before closing this ar-
ticle, I must say a few
words on the Ukiyo-ye,
in reference to my argu-
ment. Though most
popular with Westerners,
the Ukiyo-ye, with few
exceptions, is lacking in
suggestiveness, excelling
only in beauty of form
and colour. It runs too

much to a display of ardenrun place, surrey: the garden front, ernest newton, architect-