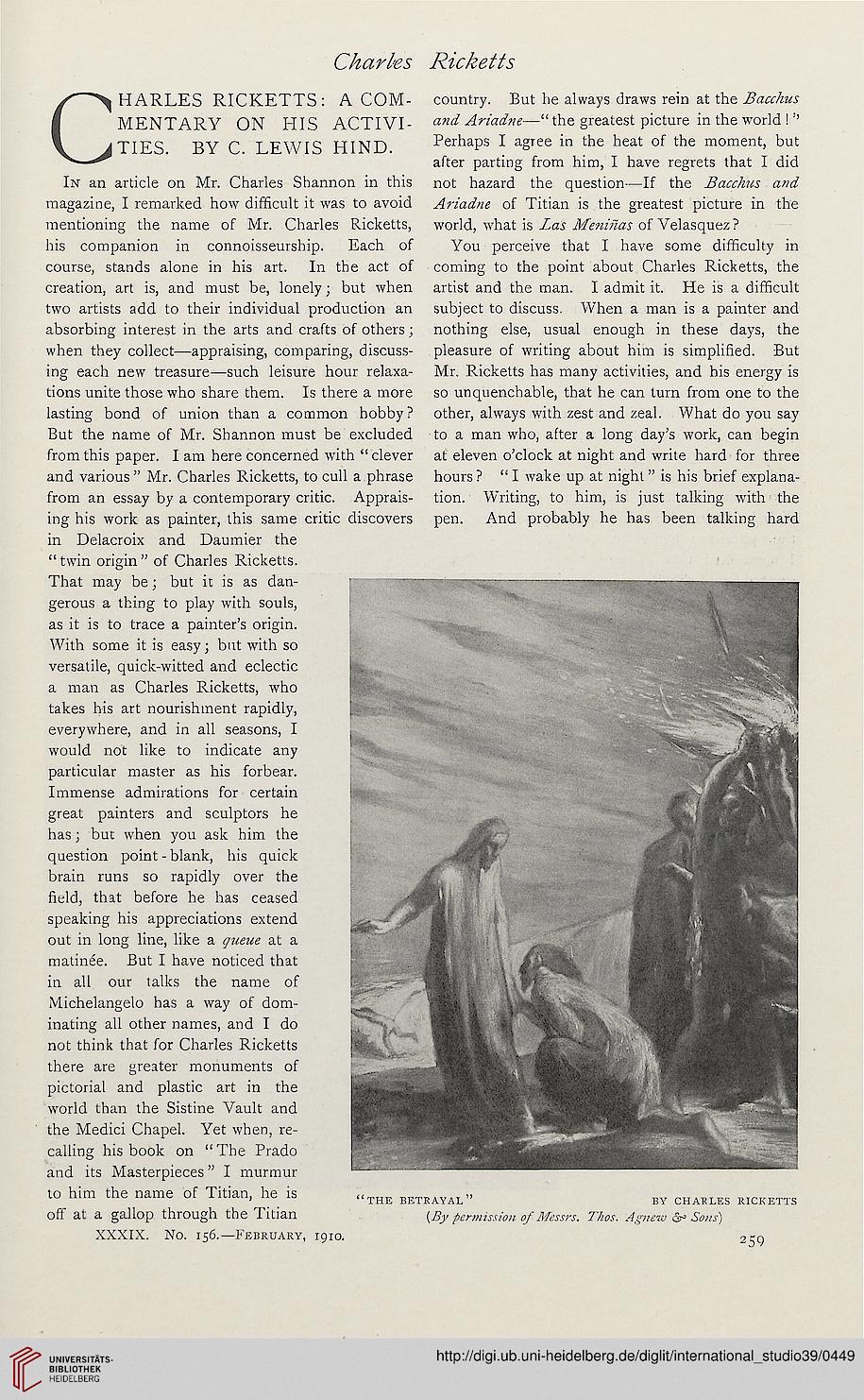 CHARLES RICKETTS : A COM- country. But he always draws rein at the Bacchus
MENTARY ON HIS ACTIVI- and Ariadne—" the greatest picture in the world!''
TIES BY C LEWIS HIND Perhaps I agree in the heat of the moment, but
after parting from him, I have regrets that I did
In an article on Mr. Charles Shannon in this not hazard the question—If the Bacchus and
magazine, I remarked how difficult it was to avoid Ariadne of Titian is the greatest picture in the
mentioning the name of Mr. Charles Ricketts, world, what is Las Meninas of Velasquez ?
his companion in connoisseurship. Each of You perceive that I have some difficulty in
course, stands alone in his art. In the act of coming to the point about Charles Ricketts, the
creation, art is, and must be, lonely; but when artist and the man. I admit it. He is a difficult
two artists add to their individual production an subject to discuss. When a man is a painter and
absorbing interest in the arts and crafts of others; nothing else, usual enough in these days, the
when they collect—appraising, comparing, discuss- pleasure of writing about him is simplified. But
ing each new treasure—such leisure hour relaxa- Mr. Ricketts has many activities, and his energy is
tions unite those who share them. Is there a more so unquenchable, that he can turn from one to the
lasting bond of union than a common hobby? other, always with zest and zeal. What do you say
But the name of Mr. Shannon must be excluded to a man who, after a long day's work, can begin
from this paper. I am here concerned with " clever at eleven o'clock at night and write hard for three
and various " Mr. Charles Ricketts, to cull a phrase hours ? "I wake up at night " is his brief explana-
from an essay by a contemporary critic. Apprais- tion. Writing, to him, is just talking with the
ing his work as painter, this same critic discovers pen. And probably he has been talking hard
in Delacroix and Daumier the
"twin origin" of Charles Ricketts.
That may be; but it is as dan-
gerous a thing to play with souls,
as it is to trace a painter's origin.
With some it is easy; but with so
versatile, quick-witted and eclectic
a man as Charles Ricketts, who
takes his art nourishment rapidly,
everywhere, and in all seasons, I
would not like to indicate any
particular master as his forbear.
Immense admirations for certain
great painters and sculptors he
has; but when you ask him the
question point - blank, his quick
brain runs so rapidly over the
field, that before he has ceased
speaking his appreciations extend
out in long line, like a queue at a
matinee. But I have noticed that
in all our talks the name of
Michelangelo has a way of dom-
inating all other names, and I do
not think that for Charles Ricketts
there are greater monuments of
pictorial and plastic art in the
world than the Sistine Vault and
the Medici Chapel. Yet when, re-
calling his book on " The Prado
and its Masterpieces" I murmur
to him the name of Titian, he is ''the betrayal" by charles ricketts

off at a gallop through the Titian (By permission of Messrs. Thos. Agneia & Sons)