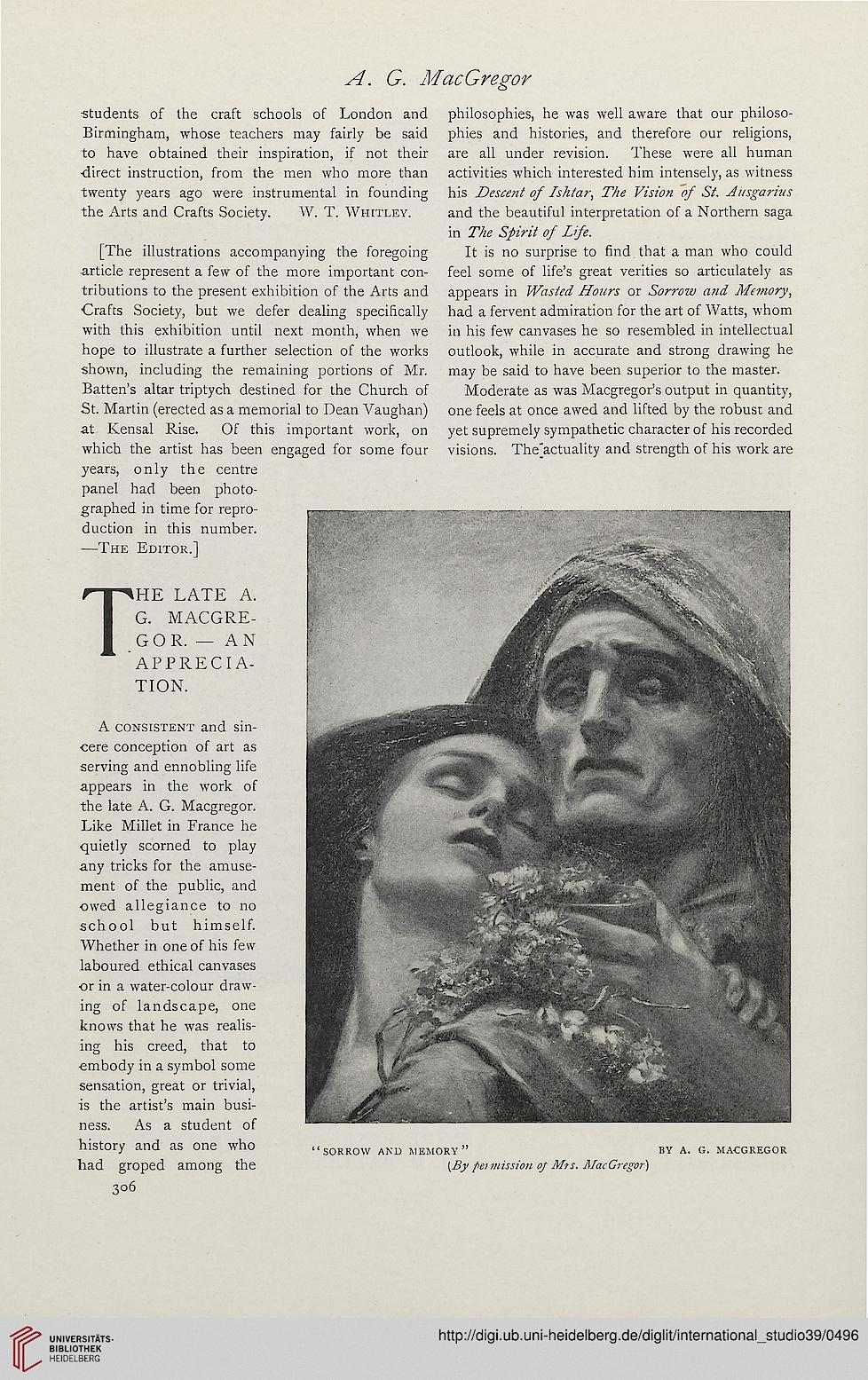 students of the craft schools of London and philosophies, he was well aware that our philoso-

Birmingham, whose teachers may fairly be said phies and histories, and therefore our religions,

to have obtained their inspiration, if not their are all under revision. These were all human

direct instruction, from the men who more than activities which interested him intensely, as witness

twenty years ago were instrumental in founding his Descent of Ishtar, The Vision of St. Ausgarius

the Arts and Crafts Society. W. T. Whitley. and the beautiful interpretation of a Northern saga

in The Spirit of Life.

tributions to the present exhibition of the Arts and appears in Wasted Hours or Sorrow and Memory,

Crafts Society, but we defer dealing specifically had a fervent admiration for the art of Watts, whom

with this exhibition until next month, when we in his few canvases he so resembled in intellectual

hope to illustrate a further selection of the works outlook, while in accurate and strong drawing he

shown, including the remaining portions of Mr. may be said to have been superior to the master.
Batten's altar triptych destined for the Church of Moderate as was Macgregor's output in quantity,

St. Martin (erected as a memorial to Dean Vaughan) one feels at once awed and lifted by the robust and

at Kensal Rise. Of this important work, on yet supremely sympathetic character of his recorded

which the artist has been engaged for some four visions. The'actuality and strength of his work are
years, only the centre
panel had been photo-
graphed in time for repro-
duction in this number.
—The Editor.]

A consistent and sin-
cere conception of art as
serving and ennobling life
appears in the work of
the late A. G. Macgregor.
Like Millet in France he
quietly scorned to play
any tricks for the amuse-
ment of the public, and
owed allegiance to no
school but himself.
Whether in one of his few
laboured ethical canvases
or in a water-colour draw-
ing of landscape, one
knows that he was realis-
ing his creed, that to
embody in a symbol some
sensation, great or trivial,
is the artist's main busi-
ness. As a student of

history and as one who "sorrow and memory" by a. g. macgregor

had groped among the (By pei mission of Mrs. MacGregor)