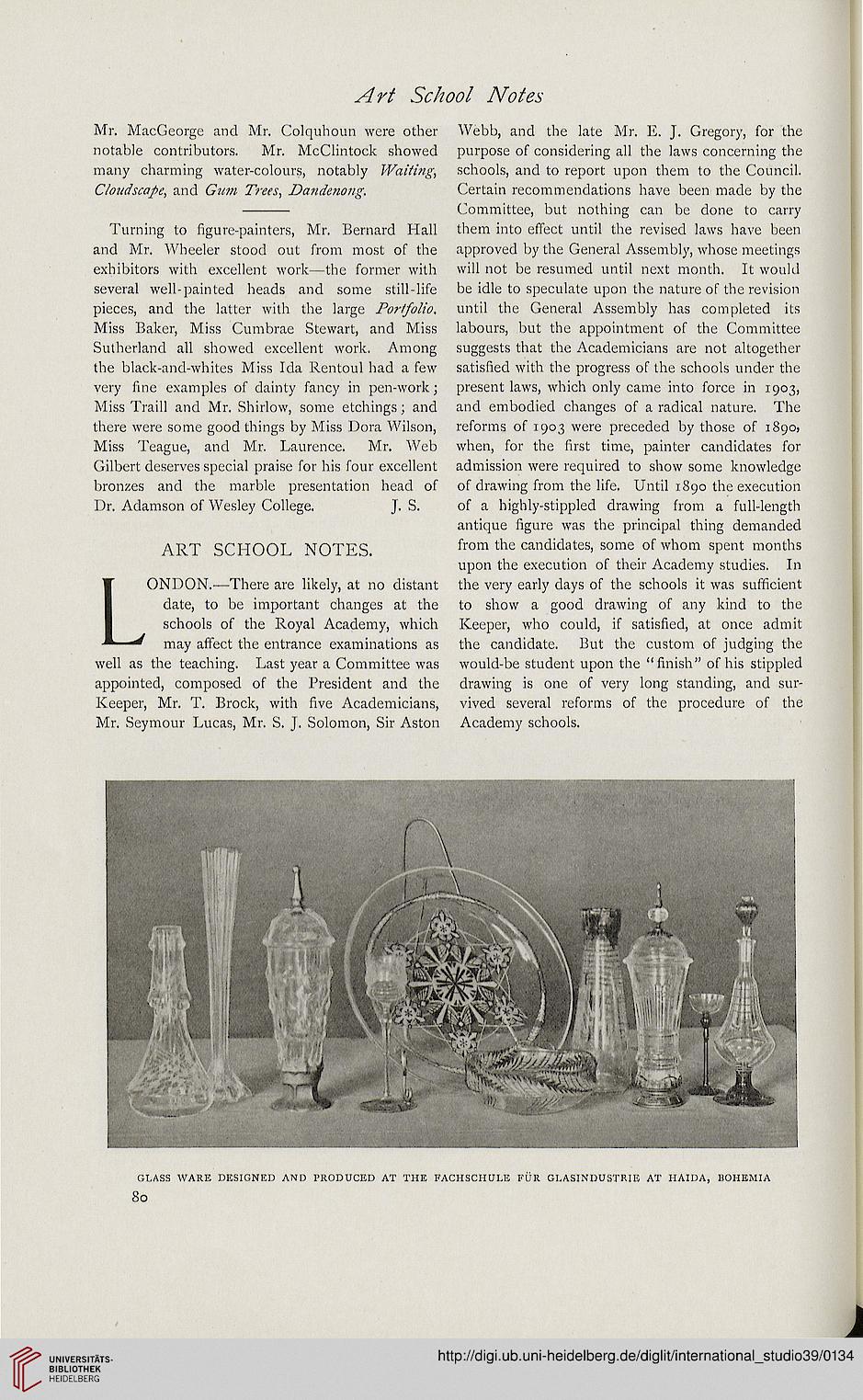 Mr, MacGeorge and Mr. Colquhoun were other Webb, and the late Mr. E. j. Gregory, for the

notable contributors. Mr. McClintock showed purpose of considering all the laws concerning the

many charming water-colours, notably Waiting, schools, and to report upon them to the Council.

Clmtdscape, and Gum Trees, Dandenong. Certain recommendations have been made by the

- Committee, but nothing can be done to carry

Turning to figure-painters, Mr. Bernard Hall them into effect until the revised laws have been

and Mr. Wheeler stood out from most of the approved by the General Assembly, whose meetings

exhibitors with excellent work the former with will not be resumed until next month. It would

pieces, and the latter with the large Portfolio, until the General Assembly has completed its

Miss Baker, Miss Cumbrae Stewart, and Miss labours, but the appointment of the Committee

Sutherland all showed excellent work. Among suggests that the Academicians are not altogether

very line examples of dainty fancy in pen-work; present laws, which only came into force in 1903,

Miss Traill and Mr. Shirlow, some etchings; and and embodied changes of a radical nature. The

there were some good things by Miss Dora Wilson, reforms of 1903 were preceded by those of 1890)

Miss Teague, and Mr. Laurence. Mr. Web when, for the fust time, painter candidates for

bronzes and the marble presentation head of of drawing from the life. Until 1890 the execution

Dr. Adamson of Wesley College. J. S. of a highly-stippled drawing from a full-length

ART SCHOOI NOTES from the candidates, some of whom spent months

upon the execution of their Academy studies. In

LONDON.—There are likely, at no distant the very early days of the schools it was sufficient

date, to be important changes at the to show a good drawing of any kind to the

schools of the Royal Academy, which Keeper, who could, if satisfied, at once admit

may affect the entrance examinations as the candidate. But the custom of judging the

well as the teaching. Last year a Committee was would-be student upon the "finish" of his stippled

appointed, composed of the President and the drawing is one of very long standing, and sur-

Keeper, Mr. T. Brock, with five Academicians, vived several reforms of the procedure of the