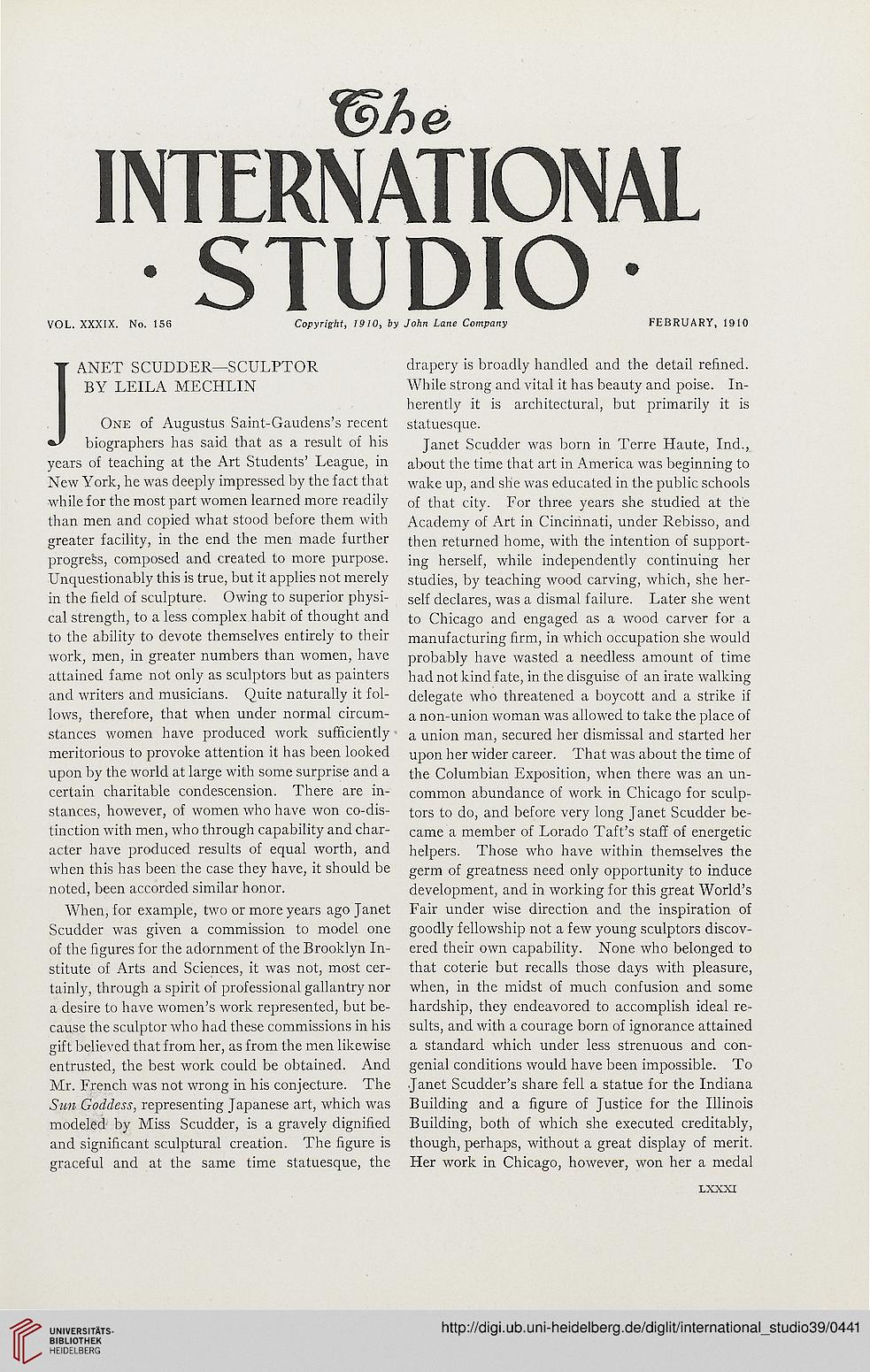 JANET SCUDDER—SCULPTOR
BY LEILA MECHLIN
One of Augustus Saint-Gaudens's recent
biographers has said that as a result of his
years of teaching at the Art Students' League, in
New York, he was deeply impressed by the fact that
while for the most part women learned more readily
than men and copied what stood before them with
greater facility, in the end the men made further
progress, composed and created to more purpose.
Unquestionably this is true, but it applies not merely
in the field of sculpture. Owing to superior physi-
cal strength, to a less complex habit of thought and
to the ability to devote themselves entirely to their
work, men, in greater numbers than women, have
attained fame not only as sculptors but as painters
and writers and musicians. Quite naturally it fol-
lows, therefore, that when under normal circum-
stances women have produced work sufficiently
meritorious to provoke attention it has been looked
upon by the world at large with some surprise and a
certain charitable condescension. There are in-
stances, however, of women who have won co-dis-
tinction with men, who through capability and char-
acter have produced results of equal worth, and
when this has been the case they have, it should be
noted, been accorded similar honor.

When, for example, two or more years ago Janet
Scudder was given a commission to model one
of the figures for the adornment of the Brooklyn In-
stitute of Arts and Sciences, it was not, most cer-
tainly, through a spirit of professional gallantry nor
a desire to have women's work represented, but be-
cause the sculptor who had these commissions in his
gift believed that from her, as from the men likewise
entrusted, the best work could be obtained. And
Mr. French was not wrong in his conjecture. The
Sun Goddess, representing Japanese art, which was
modeled by Miss Scudder, is a gravely dignified
and significant sculptural creation. The figure is
graceful and at the same time statuesque, the

drapery is broadly handled and the detail refined.
While strong and vital it has beauty and poise. In-
herently it is architectural, but primarily it is
statuesque.

Janet Scudder was born in Terre Haute, Ind.,
about the time that art in America was beginning to
wake up, and she was educated in the public schools
of that city. For three years she studied at the
Academy of Art in Cincinnati, under Rebisso, and
then returned home, with the intention of support-
ing herself, while independently continuing her
studies, by teaching wood carving, which, she her-
self declares, was a dismal failure. Later she went
to Chicago and engaged as a wood carver for a
manufacturing firm, in which occupation she would
probably have wasted a needless amount of time
had not kind fate, in the disguise of an irate walking
delegate who threatened a boycott and a strike if
a non-union woman was allowed to take the place of
a union man, secured her dismissal and started her
upon her wider career. That was about the time of
the Columbian Exposition, when there was an un-
common abundance of work in Chicago for sculp-
tors to do, and before very long Janet Scudder be-
came a member of Lorado Taft's staff of energetic
helpers. Those who have within themselves the
germ of greatness need only opportunity to induce
development, and in working for this great World's
Fair under wise direction and the inspiration of
goodly fellowship not a few young sculptors discov-
ered their own capability. None who belonged to
that coterie but recalls those days with pleasure,
when, in the midst of much confusion and some
hardship, they endeavored to accomplish ideal re-
sults, and with a courage born of ignorance attained
a standard which under less strenuous and con-
genial conditions would have been impossible. To
Janet Scudder's share fell a statue for the Indiana
Building and a figure of Justice for the Illinois
Building, both of which she executed creditably,
though, perhaps, without a great display of merit.
Her work in Chicago, however, won her a medal