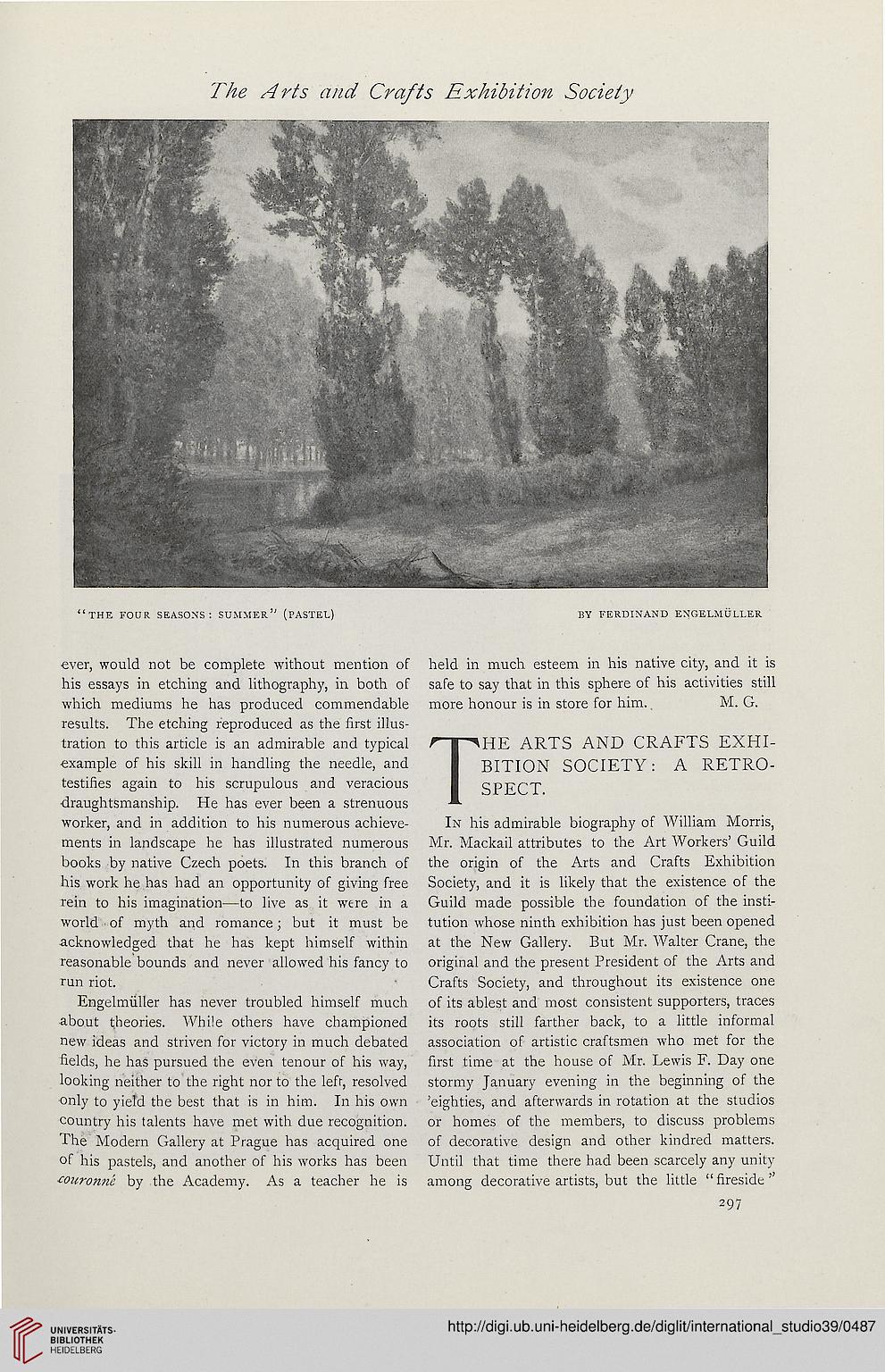 Information about OCR text
The Arts and Crafts Exhibition Society

ever, would not be complete without mention of
his essays in etching and lithography, in both of
which mediums he has produced commendable
results. The etching reproduced as the first illus-
tration to this article is an admirable and typical
•example of his skill in handling the needle, and
testifies again to his scrupulous and veracious
•draughtsmanship. He has ever been a strenuous
worker, and in addition to his numerous achieve-
ments in landscape he has illustrated numerous
books by native Czech poets. In this branch of
his work he has had an opportunity of giving free
rein to his imagination—to live as it were in a
world of myth and romance; but it must be
acknowledged that he has kept himself within
reasonable bounds and never allowed his fancy to
run riot.

Engelmiiller has never troubled himself much
about theories. While others have championed
new ideas and striven for victory in much debated
fields, he has pursued the even tenour of his way,
looking neither to the right nor to the lefr, resolved
only to yieTd the best that is in him. In his own
country his talents have met with due recognition.
The Modern Gallery at Prague has acquired one
of his pastels, and another of his works has been
touronne by the Academy. As a teacher he is

held in much esteem in his native city, and it is
safe to say that in this sphere of his activities still
more honour is in store for him. M. G.

HE ARTS AND CRAFTS EXHI-
BITION SOCIETY: A RETRO-
SPECT.

In his admirable biography of William Morris,
Mr. Mackail attributes to the Art Workers' Guild
the origin of the Arts and Crafts Exhibition
Society, and it is likely that the existence of the
Guild made possible the foundation of the insti-
tution whose ninth exhibition has just been opened
at the New Gallery. But Mr. Walter Crane, the
original and the present President of the Arts and
Crafts Society, and throughout its existence one
of its ablest and most consistent supporters, traces
its roots still farther back, to a little informal
association of artistic craftsmen who met for the
first time at the house of Mr. Lewis F. Day one
stormy January evening in the beginning of the
'eighties, and afterwards in rotation at the studios
or homes of the members, to discuss problems
of decorative design and other kindred matters.
Until that time there had been scarcely any unity
among decorative artists, but the little " fireside '