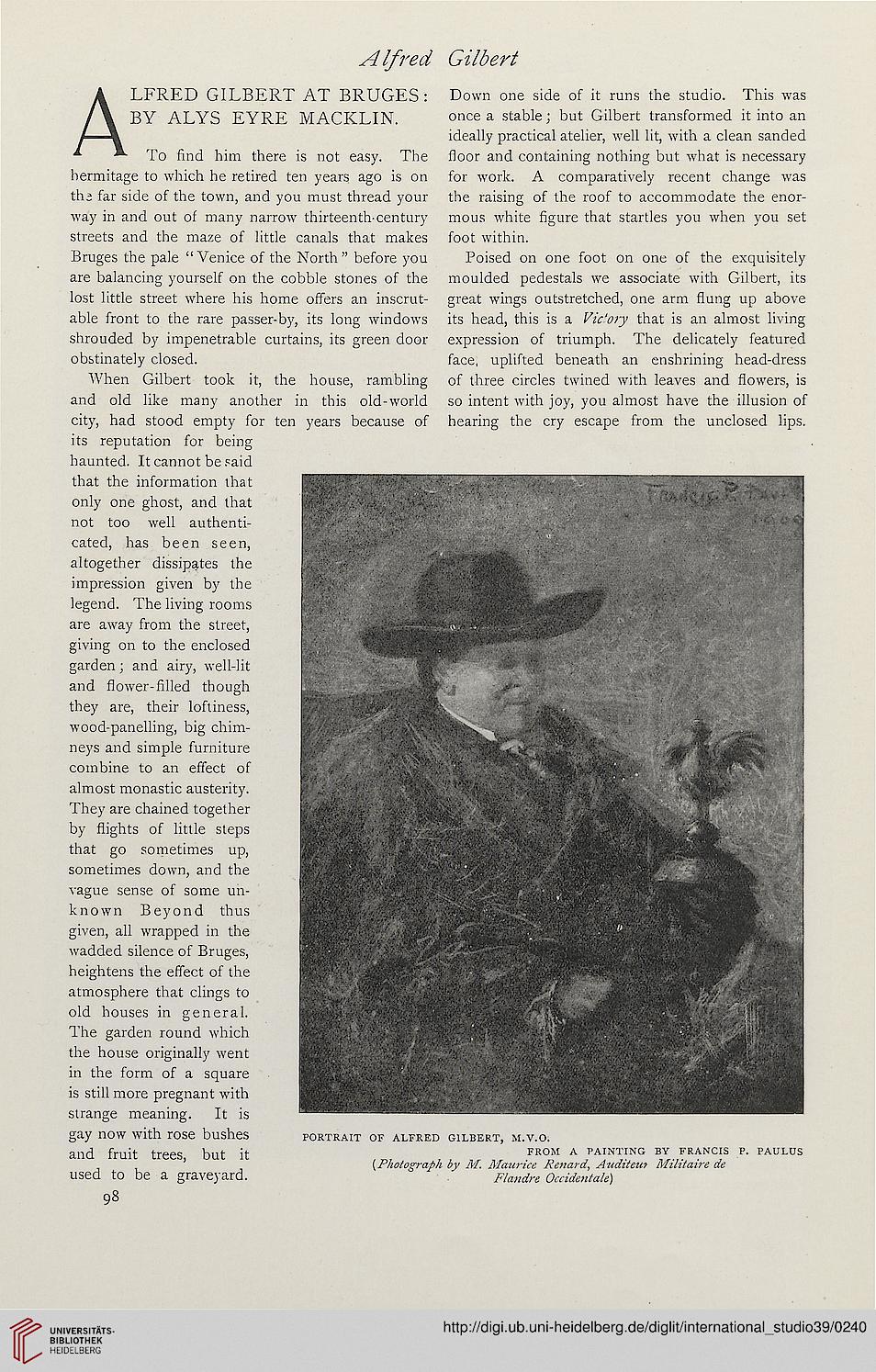 Information about OCR text
A If red Gilbert

ALFRED GILBERT AT BRUGES : Down one side of it runs the studio. This was
BY ALYS EYRE MACKLIN. once a stable; but Gilbert transformed it into an

ideally practical atelier, well lit, with a clean sanded
To find him there is not easy. The floor and containing nothing but what is necessary
hermitage to which he retired ten years ago is on for work. A comparatively recent change was
tha far side of the town, and you must thread your the raising of the roof to accommodate the enor-
way in and out of many narrow thirteenth-century mous white figure that startles you when you set
streets and the maze of little canals that makes foot within.

Bruges the pale "Venice of the North" before you Poised on one foot on one of the exquisitely
are balancing yourself on the cobble stones of the moulded pedestals we associate with Gilbert, its
lost little street where his home offers an inscrut- great wings outstretched, one arm flung up above
able front to the rare passer-by, its long windows its head, this is a Vic'ory that is an almost living
shrouded by impenetrable curtains, its green door expression of triumph. The delicately featured
obstinately closed. face, uplifted beneath an enshrining head-dress

When Gilbert took it, the house, rambling of three circles twined with leaves and flowers, is
and old like many another in this old-world so intent with joy, you almost have the illusion of
city, had stood empty for ten years because of hearing the cry escape from the unclosed lips,
its reputation for being
haunted. It cannot be said
that the information that
only one ghost, and that
not too well authenti-
cated, has been seen,
altogether dissipates the
impression given by the
legend. The living rooms
are away from the street,
giving on to the enclosed
garden; and airy, well-lit
and flower-filled though
they are, their loftiness,
wood-panelling, big chim-
neys and simple furniture
combine to an effect of
almost monastic austerity.
They are chained together
by flights of little steps
that go sometimes up,
sometimes down, and the
vague sense of some un-
known Beyond thus
given, all wrapped in the
wadded silence of Bruges,
heightens the effect of the
atmosphere that clings to
old houses in general.
The garden round which
the house originally went
in the form of a square
is still more pregnant with
strange meaning. It is
gay now with rose bushes portrait of Alfred gilbert, m.v.o.

and fruit trees but it from a painting by francis p. paulus