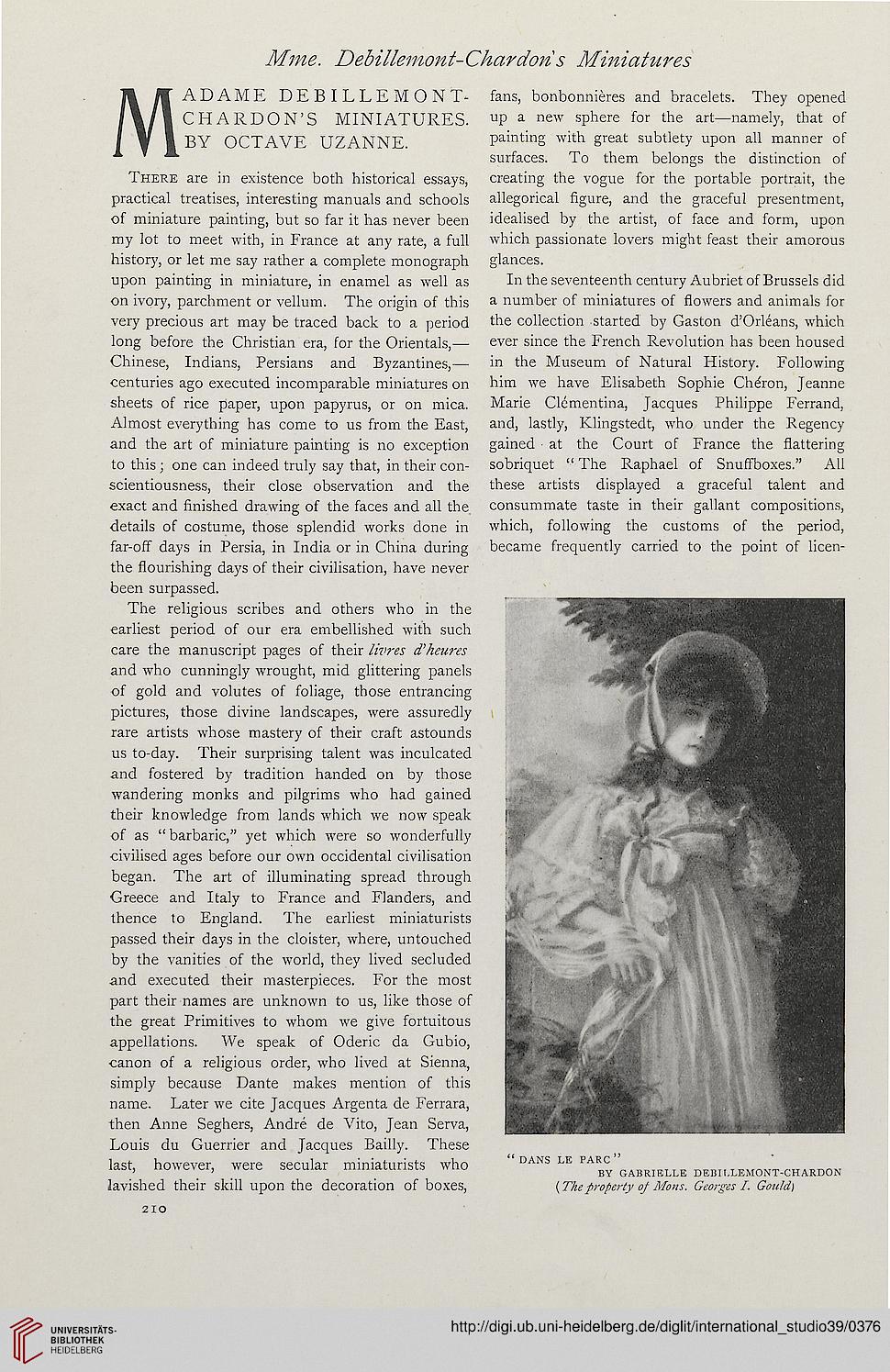 There are in existence both historical essays,
practical treatises, interesting manuals and schools
of miniature painting, but so far it has never been
my lot to meet with, in France at any rate, a full
history, or let me say rather a complete monograph
upon painting in miniature, in enamel as well as
on ivory, parchment or vellum. The origin of this
very precious art may be traced back to a period
long before the Christian era, for the Orientals,—
Chinese, Indians, Persians and Byzantines,—
centuries ago executed incomparable miniatures on
sheets of rice paper, upon papyrus, or on mica.
Almost everything has come to us from the East,
and the art of miniature painting is no exception
to this j one can indeed truly say that, in their con-
scientiousness, their close observation and the
exact and finished drawing of the faces and all the
details of costume, those splendid works done in
far-off days in Persia, in India or in China during
the flourishing days of their civilisation, have never
been surpassed.

The religious scribes and others who in the
earliest period of our era embellished with such
care the manuscript pages of their livres d'heures
and who cunningly wrought, mid glittering panels
of gold and volutes of foliage, those entrancing
pictures, those divine landscapes, were assuredly
rare artists whose mastery of their craft astounds
us to-day. Their surprising talent was inculcated
and fostered by tradition handed on by those
wandering monks and pilgrims who had gained
their knowledge from lands which we now speak
of as " barbaric," yet which were so wonderfully
civilised ages before our own occidental civilisation
began. The art of illuminating spread through
Greece and Italy to France and Flanders, and
thence to England. The earliest miniaturists
passed their days in the cloister, where, untouched
by the vanities of the world, they lived secluded
and executed their masterpieces. For the most
part their names are unknown to us, like those of
the great Primitives to whom we give fortuitous
appellations. We speak of Oderic da Gubio,
canon of a religious order, who lived at Sienna,
simply because Dante makes mention of this
name. Later we cite Jacques Argenta de Ferrara,
then Anne Seghers, Andre de Vito, Jean Serva,
Louis du Guerrier and Jacques Bailly. These
last, however, were secular miniaturists who
lavished their skill upon the decoration of boxes,
210

fans, bonbonnieres and bracelets. They opened
up a new sphere for the art—namely, that of
painting with great subtlety upon all manner of
surfaces. To them belongs the distinction of
creating the vogue for the portable portrait, the
allegorical figure, and the graceful presentment,
idealised by the artist, of face and form, upon
which passionate lovers might feast their amorous
glances.

In the seventeenth century Aubriet of Brussels did
a number of miniatures of flowers and animals for
the collection started by Gaston d'Orleans, which
ever since the French Revolution has been housed
in the Museum of Natural History. Following
him we have Elisabeth Sophie Che'ron, Jeanne
Marie Clementina, Jacques Philippe Ferrand,
and, lastly, Klingstedt, who under the Regency
gained at the Court of France the flattering
sobriquet " The Raphael of Snuffboxes." All
these artists displayed a graceful talent and
consummate taste in their gallant compositions,
which, following the customs of the period,
became frequently carried to the point of licen-

BY GABRIELLE DEBH.LEMONT-CHARDON
(Theproperty of Mons. Georges I. Gould)