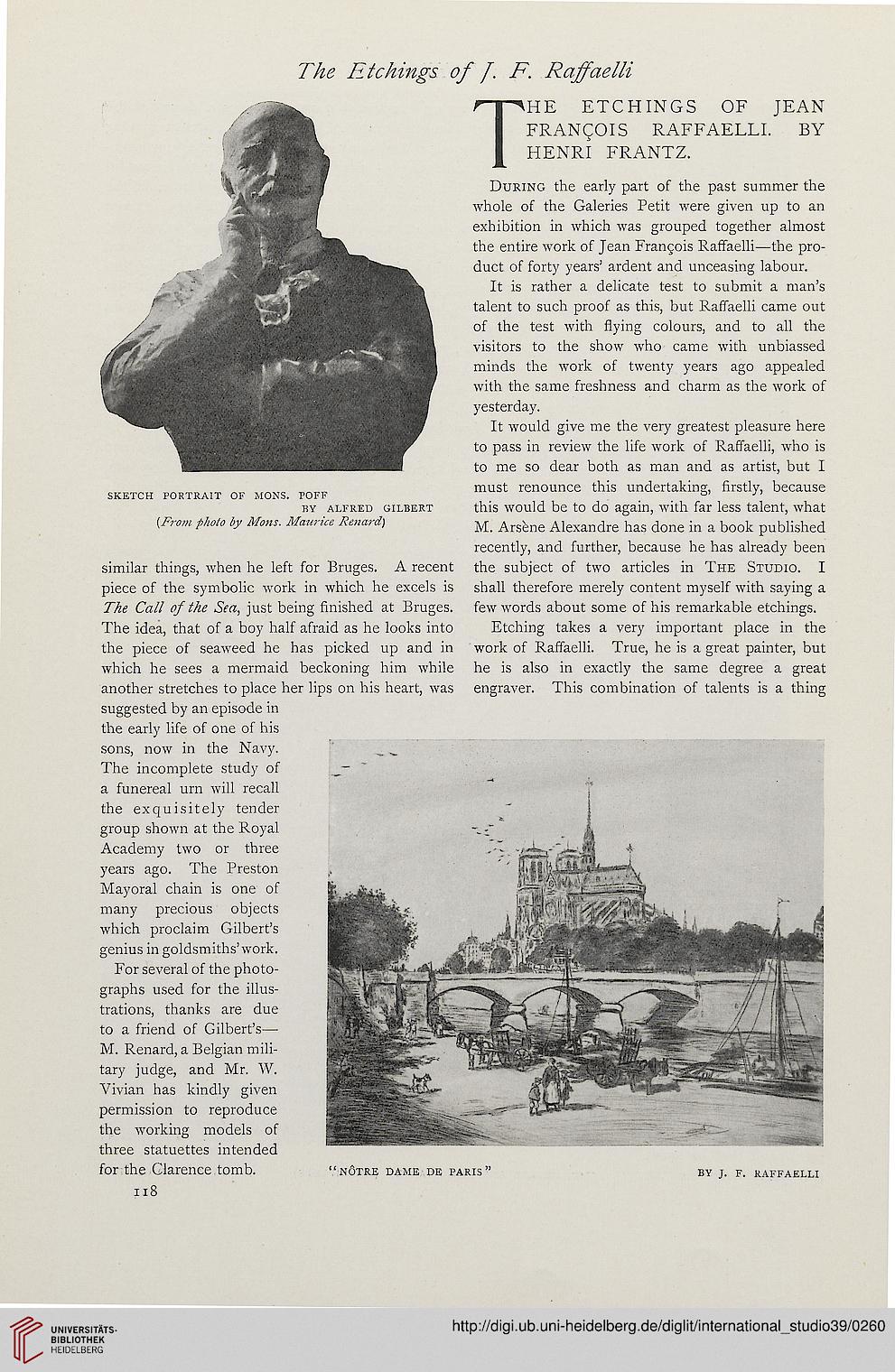 Information about OCR text
The Etchings of /. F. Raffaelli

HE ETCHINGS OF JEAN
FRANCOIS RAFFAELLI. BY
HENRI FRANTZ.

During the early part of the past summer the
whole of the Galeries Petit were given up to an
exhibition in which was grouped together almost
the entire work of Jean Francois Raffaelli—the pro-
duct of forty years' ardent and unceasing labour.

It is rather a delicate test to submit a man's
talent to such proof as this, but Raffaelli came out
of the test with flying colours, and to all the
visitors to the show who came with unbiassed
minds the work of twenty years ago appealed
with the same freshness and charm as the work of
yesterday.

It would give me the very greatest pleasure here
to pass in review the life work of Raffaelli, who is
to me so dear both as man and as artist, but I
must renounce this undertaking;, firstly, because

by Alfred gilbert this would be to do again, with far less talent, what
{From photo by Mom. Maurice Retard) M_ Arsfene Alexandre has done in a book published

recently, and further, because he has already been
similar things, when he left for Bruges. A recent the subject of two articles in The Studio. I
piece of the symbolic work in which he excels is shall therefore merely content myself with saying a
The Call of the Sea, just being finished at Bruges, few words about some of his remarkable etchings.
The idea, that of a boy half afraid as he looks into Etching takes a very important place in the
the piece of seaweed he has picked up and in work of Raffaelli. True, he is a great painter, but
which he sees a mermaid beckoning him while he is also in exactly the same degree a great
another stretches to place her lips on his heart, was engraver. This combination of talents is a thing
suggested by an episode in
the early life of one of his
sons, now in the Navy.
The incomplete study of
a funereal urn will recall
the exquisitely tender
group shown at the Royal
Academy two or three
years ago. The Preston
Mayoral chain is one of
many precious objects
which proclaim Gilbert's
genius in goldsmiths'work.

For several of the photo-
graphs used for the illus-
trations, thanks are due
to a friend of Gilbert's—
M. Renard, a Belgian mili-
tary judge, and Mr. W.
Vivian has kindly given
permission to reproduce
the working models of
three statuettes intended