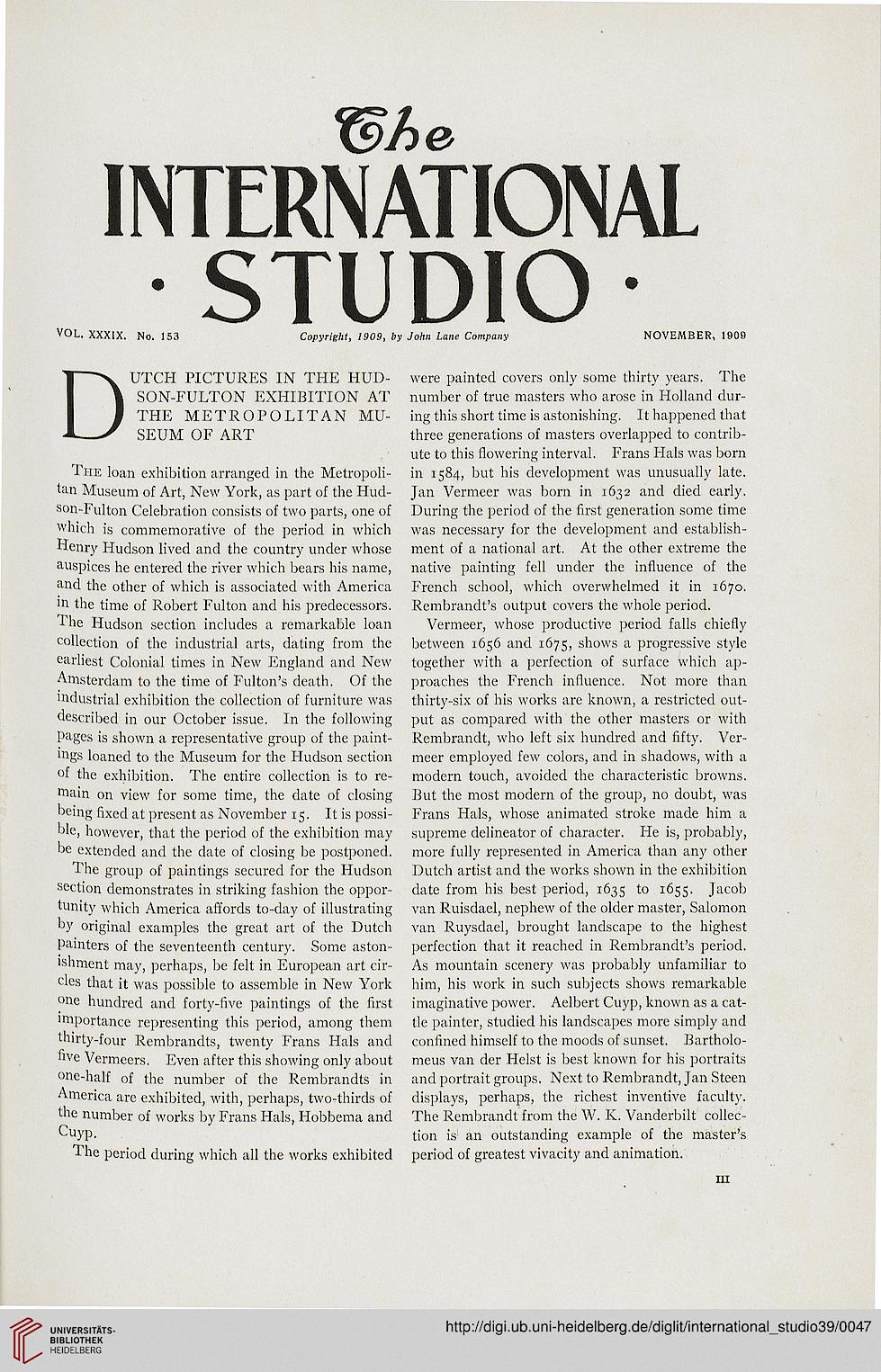 The loan exhibition arranged in the Metropoli-
tan Museum of Art, New York, as part of the Hud-
son-Fulton Celebration consists of two parts, one of
which is commemorative of the period in which
Henry Hudson lived and the country under whose
auspices he entered the river which bears his name,
and the other of which is associated with America
in the time of Robert Fulton and his predecessors.
The Hudson section includes a remarkable loan
collection of the industrial arts, dating from the
earliest Colonial times in New England and New
Amsterdam to the time of Fulton's death. Of the
industrial exhibition the collection of furniture was
described in our October issue. In the following
pages is shown a representative group of the paint-
ings loaned to the Museum for the Hudson section
of the exhibition. The entire collection is to re-
main on view for some time, the dale of closing
being fixed at present as November 15. It is possi-
ble, however, that the period of the exhibition may
be extended and the date of closing be postponed.

The group of paintings secured for the Hudson
section demonstrates in striking fashion the oppor-
tunity which America affords to-day of illustrating
by original examples the great art of the Dutch
painters of the seventeenth century. Some aston-
ishment may, perhaps, be felt in European art cir-
cles that it was possible to assemble in New York
°ne hundred and forty-five paintings of the first
importance representing this period, among them
thirty-four Rembrandts, twenty Frans Hals and
live Vermeers. Even after this showing only about
one-half of the number of the Rembrandts in
America are exhibited, with, perhaps, two-thirds of
the number of works by Frans Hals, Hobbema and
Cuyp.

The period during which all the works exhibited

were painted covers only some thirty years. The
number of true masters who arose in Holland dur-
ing this short time is astonishing. J t happened that
three generations of masters overlapped to contrib-
ute to this (lowering interval. Frans Hals was born
in 1584, but his development was unusually late.
Jan Vermeer was born in 1632 and died early.
During the period of the first generation some time
was necessary for the development and establish-
ment of a national art. At the other extreme the
native painting fell under the influence of the
French school, which overwhelmed it in 1670.
Rembrandt's output covers the whole period.

Vermeer, w hose productive period falls chiefly
between 1656 and 1675, shows a progressive style
together w ith a perfection of surface which ap-
proaches the French influence. Not more than
thirty-six of his works are known, a restricted out-
put as compared with the other masters or with
Rembrandt, who left six hundred and fifty. Ver-
meer employed few colors, and in shadows, with a
modern touch, avoided the characteristic browns.
Hut the most modern of the group, no doubt, was
Frans Hals, whose animated stroke made him a
supreme delineator of character. He is, probably,
more fully represented in America than any other
Dutch artist and the works shown in the exhibition
date from his best period, 1635 to 1655. Jacob
van Ruisdael, nephew of the older master, Salomon
van Ruysdael, brought landscape to the highest
perfection that it reached in Rembrandt's period.
As mountain scenery was probably unfamiliar to
him, his work in such subjects shows remarkable
imaginative power. Aelbert Cuyp, known as a cat-
tle painter, studied his landscapes more simply and
confined himself to the moods of sunset. Bartholo-
meus van der Heist is best known for his portraits
and portrait groups. Next to Rembrandt, Jan Steen
displays, perhaps, the richest inventive faculty.
The Rembrandt from the W. K. Vanderbilt collec-
tion is1 an outstanding example of the master's
period of greatest vivacity and animation.