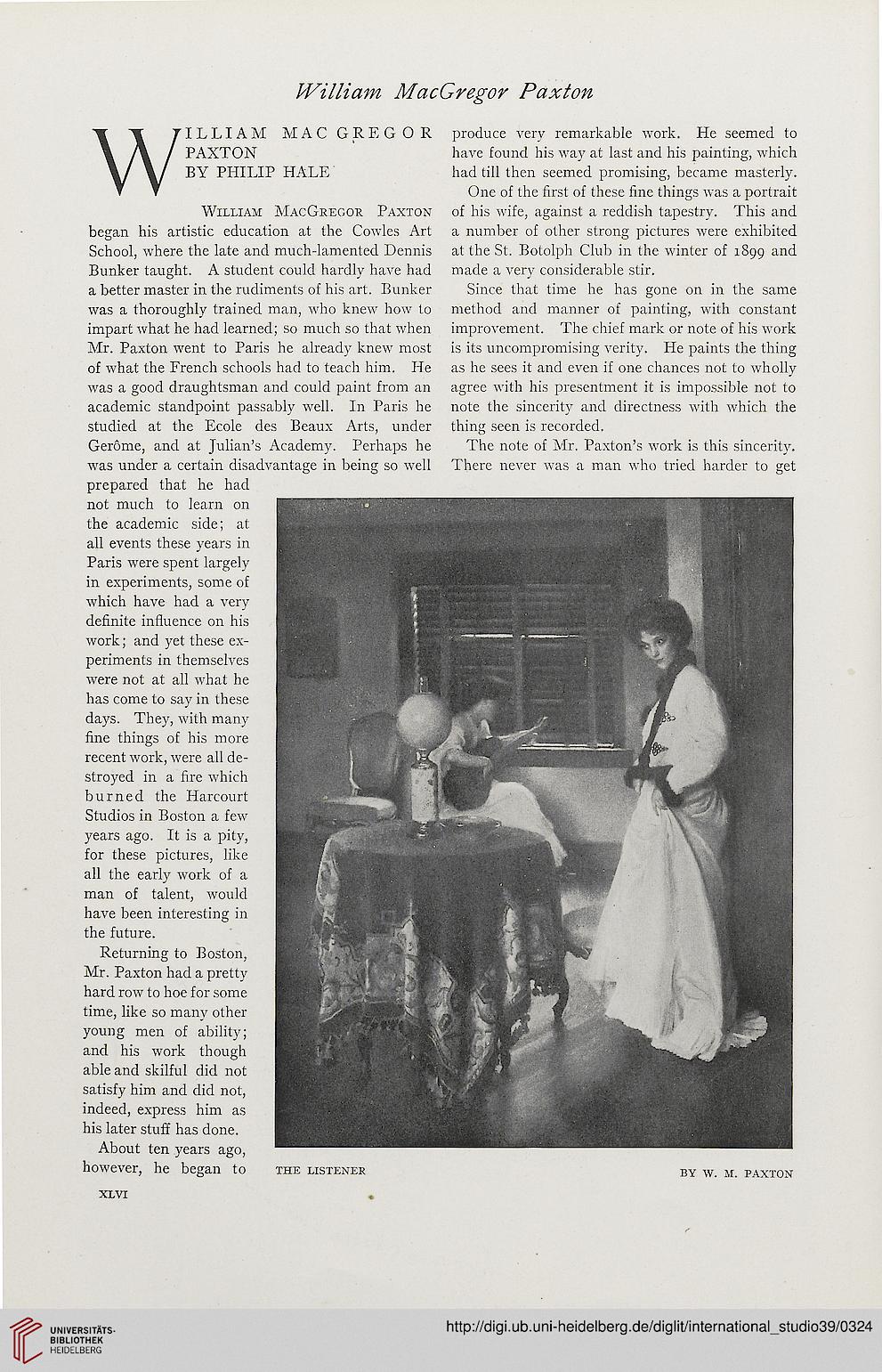 WILLIAM MACGREGOR produce very remarkable work. He seemed to
PAXTON have found his way at last and his painting, which

BY PHILIP HALE had till then seemed promising, became masterly.

One of the first of these fine things was a portrait
William MacGregor Paxton of his wife, against a reddish tapestry. This and
began his artistic education at the Cowles Art a number of other strong pictures were exhibited
School, where the late and much-lamented Dennis at the St. Botolph Club in the winter of 1899 and
Bunker taught. A student could hardly have had made a very considerable stir,
a better master in the rudiments of his art. Bunker Since that time he has gone on in the same
was a thoroughly trained man, who knew how to method and manner of painting, with constant
impart what he had learned; so much so that when improvement. The chief mark or note of his work
Mr. Paxton went to Paris he already knew most is its uncompromising verity. He paints the thing
of what the French schools had to teach him. He as he sees it and even if one chances not to wholly
was a good draughtsman and could paint from an agree with his presentment it is impossible not to
academic standpoint passably well. In Paris he note the sincerity and directness with which the
studied at the Ecole des Beaux Arts, under thing seen is recorded.

Gerome, and at Julian's Academy. Perhaps he The note of Mr. Paxton's work is this sincerity.

prepared that he had

not much to learn on ■

the academic side; at

all events these years in

in experiments, some of

which have had a very

definite influence on his Hk £■

work; and yet these ex-
periments in themselves
were not at all what he
has come to say in these

days. They, with many 'Wr*
fine things of his more SJL.
recent work, were all de-
stroyed in a fire which

burned the Harcourt \f
Studios in Boston a few

years ago. It is a pity, BBBBI^\iti

for these pictures, like H
all the early work of a
man of talent, would H
have been interesting in
the future.

Returning to Boston,
Mr. Paxton had a pretty ,fl
hard row to hoe for some

young men of ability; ■JP^B
and his work though ■k^^^^UHfl
able and skilful did not
satisfy him and did not,
indeed, express him as
his later stuff has done.

however, he began to the listener by w. m. paxton