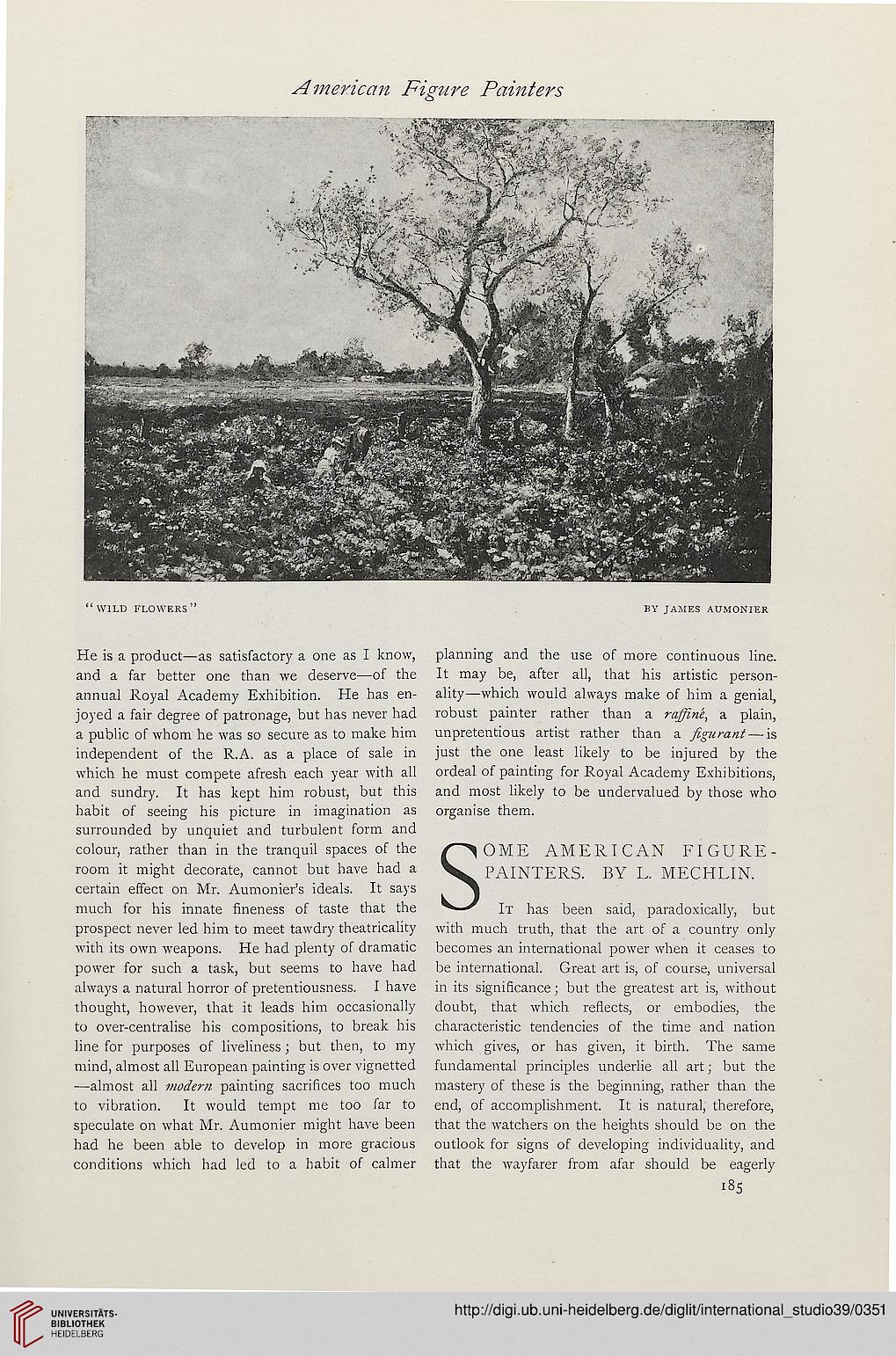 He is a product—as satisfactory a one as I know,
and a far better one than we deserve—of the
annual Royal Academy Exhibition. He has en-
joyed a fair degree of patronage, but has never had
a public of whom he was so secure as to make him
independent of the R.A. as a place of sale in
which he must compete afresh each year with all
and sundry. It has kept him robust, but this
habit of seeing his picture in imagination as
surrounded by unquiet and turbulent form and
colour, rather than in the tranquil spaces of the
room it might decorate, cannot but have had a
certain effect on Mr. Aumonier's ideals. It says
much for his innate fineness of taste that the
prospect never led him to meet tawdry theatricality
with its own weapons. He had plenty of dramatic
power for such a task, but seems to have had
always a natural horror of pretentiousness. I have
thought, however, that it leads him occasionally
to over-centralise his compositions, to break his
line for purposes of liveliness; but then, to my
mind, almost all European painting is over vignetted
—almost all modern painting sacrifices too much
to vibration. It would tempt me too far to
speculate on what Mr. Aumonier might have been
had he been able to develop in more gracious
conditions which had led to a habit of calmer

planning and the use of more continuous line.
It may be, after all, that his artistic person-
ality—which would always make of him a genial,
robust painter rather than a raffin'e, a plain,
unpretentious artist rather than a figurant — is
just the one least likely to be injured by the
ordeal of painting for Royal Academy Exhibitions,
and most likely to be undervalued by those who
organise them.

SOME AMERICAN FIGURE-
PAINTERS. BY L. MECHLIN.
It has been said, paradoxically, but
with much truth, that the art of a country only
becomes an international power when it ceases to
be international. Great art is, of course, universal
in its significance; but the greatest art is, without
doubt, that which reflects, or embodies, the
characteristic tendencies of the time and nation
which gives, or has given, it birth. The same
fundamental principles underlie all art; but the
mastery of these is the beginning, rather than the
end, of accomplishment. It is natural, therefore,
that the watchers on the heights should be on the
outlook for signs of developing individuality, and
that the wayfarer from afar should be eagerly