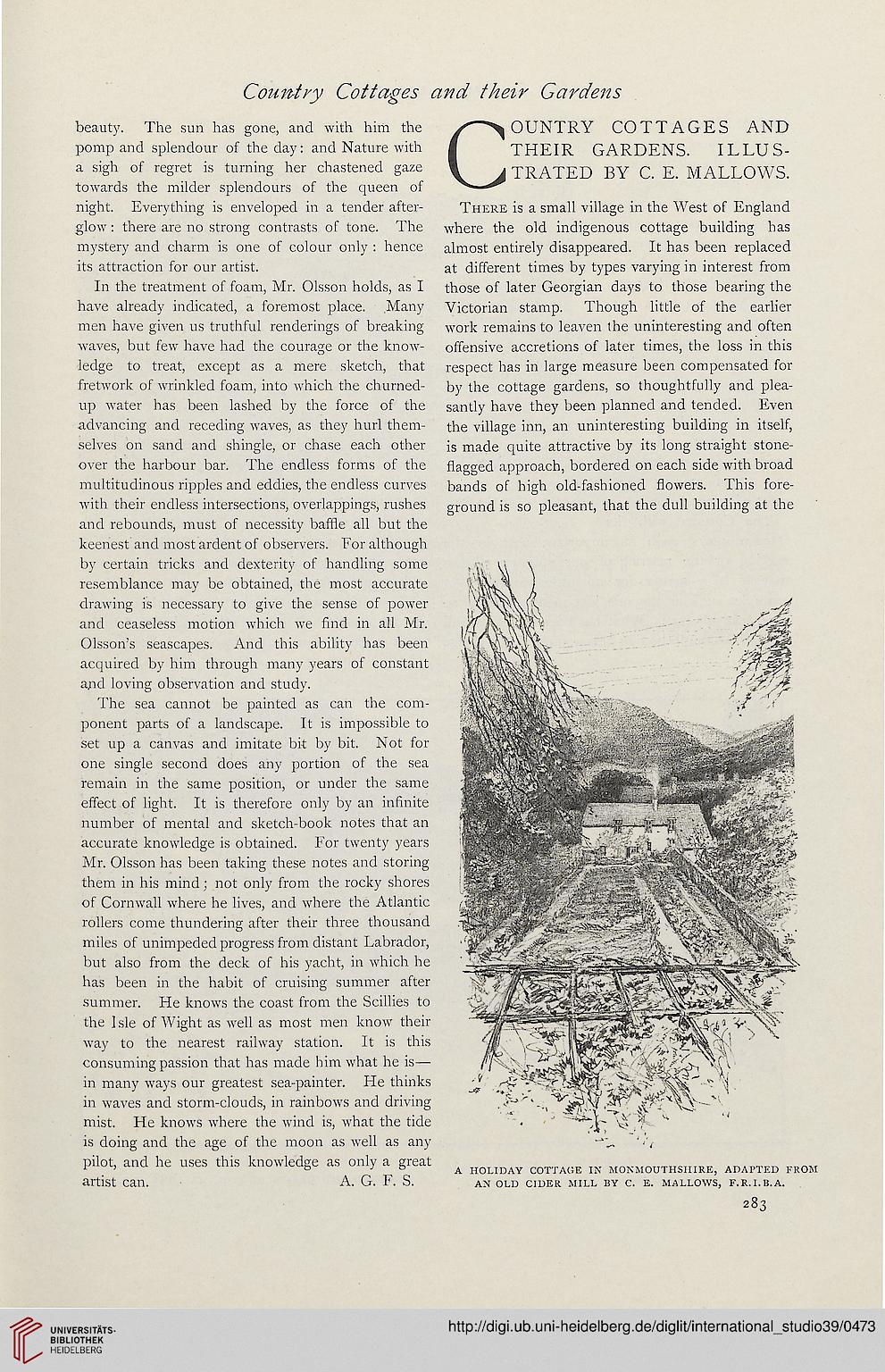 Information about OCR text
Country Cottages and their Gardens

beauty. The sun has gone, and with him the
pomp and splendour of the day: and Nature with
a sigh of regret is turning her chastened gaze
towards the milder splendours of the queen of
night. Everything is enveloped in a tender after-
glow : there are no strong contrasts of tone. The
mystery and charm is one of colour only : hence
its attraction for our artist.

In the treatment of foam, Mr. Olsson holds, as I
have already indicated, a foremost place. Many
men have given us truthful renderings of breaking
waves, but few have had the courage or the know-
ledge to treat, except as a mere sketch, that
fretwork of wrinkled foam, into which the churned-
up water has been lashed by the force of the
advancing and receding waves, as they hurl them-
selves on sand and shingle, or chase each other
over the harbour bar. The endless forms of the
multitudinous ripples and eddies, the endless curves
with their endless intersections, overlappings, rushes
and rebounds, must of necessity baffle all but the
keenest and most ardent of observers. For although
by certain tricks and dexterity of handling some
resemblance may be obtained, the most accurate
drawing is necessary to give the sense of power
and ceaseless motion which we find in all Mr.
Olsson's seascapes. And this ability has been
acquired by him through many years of constant
arid loving observation and study.

The sea cannot be painted as can the com-
ponent parts of a landscape. It is impossible to
set up a canvas and imitate bit by bit. Not for
one single second does any portion of the sea
remain in the same position, or under the same
effect of light. It is therefore only by an infinite
number of mental and sketch-book notes that an
accurate knowledge is obtained. For twenty years
Mr. Olsson has been taking these notes and storing
them in his mind; not only from the rocky shores
of Cornwall where he lives, and where the Atlantic
rollers come thundering after their three thousand
miles of unimpeded progress from distant Labrador,
but also from the deck of his yacht, in which he
has been in the habit of cruising summer after
summer. He knows the coast from the Scillies to
the Isle of Wight as well as most men know their
way to the nearest railway station. It is this
consuming passion that has made him what he is—
in many ways our greatest sea-painter. He thinks
in waves and storm-clouds, in rainbows and driving
mist. He knows where the wind is, what the tide
is doing and the age of the moon as well as any
pilot, and he uses this knowledge as only a great
artist can. A. G. F. S.

There is a small village in the West of England
where the old indigenous cottage building has
almost entirely disappeared. It has been replaced
at different times by types varying in interest from
those of later Georgian days to those bearing the
Victorian stamp. Though little of the earlier
work remains to leaven the uninteresting and often
offensive accretions of later times, the loss in this
respect has in large measure been compensated for
by the cottage gardens, so thoughtfully and plea-
santly have they been planned and tended. Even
the village inn, an uninteresting building in itself,
is made quite attractive by its long straight stone-
flagged approach, bordered on each side with broad
bands of high old-fashioned flowers. This fore-
ground is so pleasant, that the dull building at the

A HOLIDAY COTTAGE IN MONMOUTHSHIRE, ADAPTED FROM
AN OLD CIDER MILL BY C. E. MALLOWS, F.R.I.B.A.