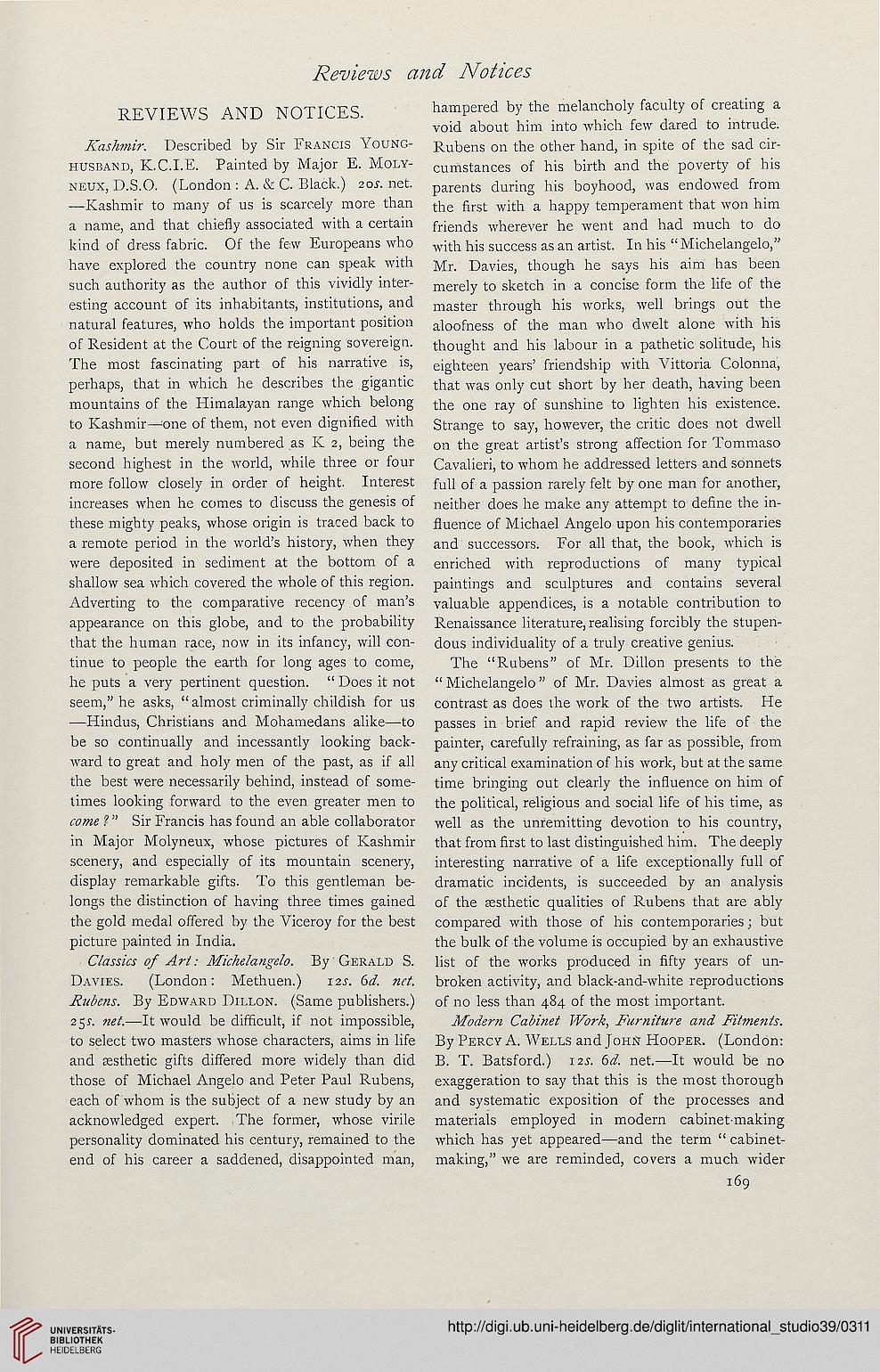 Kashmir. Described by Sir Francis Young-
husband, K.C.I.E. Painted by Major E. Moly-
neux, D.S.O. (London : A. & C. Black.) 20s. net.
—Kashmir to many of us is scarcely more than
a name, and that chiefly associated with a certain
kind of dress fabric. Of the few Europeans who
have explored the country none can speak with
such authority as the author of this vividly inter-
esting account of its inhabitants, institutions, and
natural features, who holds the important position
of Resident at the Court of the reigning sovereign.
The most fascinating part of his narrative is,
perhaps, that in which he describes the gigantic
mountains of the Himalayan range which belong
to Kashmir—one of them, not even dignified with
a name, but merely numbered as K 2, being the
second highest in the world, while three or four
more follow closely in order of height. Interest
increases when he comes to discuss the genesis of
these mighty peaks, whose origin is traced back to
a remote period in the world's history, when they
were deposited in sediment at the bottom of a
shallow sea which covered the whole of this region.
Adverting to the comparative recency of man's
appearance on this globe, and to the probability
that the human race, now in its infancy, will con-
tinue to people the earth for long ages to come,
he puts a very pertinent question. " Does it not
seem," he asks, "almost criminally childish for us
—Hindus, Christians and Mohamedans alike—to
be so continually and incessantly looking back-
ward to great and holy men of the past, as if all
the best were necessarily behind, instead of some-
times looking forward to the even greater men to
come 2 " Sir Francis has found an able collaborator
in Major Molyneux, whose pictures of Kashmir
scenery, and especially of its mountain scenery,
display remarkable gifts. To this gentleman be-
longs the distinction of having three times gained
the gold medal offered by the Viceroy for the best
picture painted in India.

Classics of Ari: Michelangelo. By Gerald S.
Davies. (London: Methuen.) i2.r. 6d. net.
Rubens. By Edward Dillon. (Same publishers.)
255-. net.—It would be difficult, if not impossible,
to select two masters whose characters, aims in life
and aesthetic gifts differed more widely than did
those of Michael Angelo and Peter Paul Rubens,
each of whom is the subject of a new study by an
acknowledged expert. The former, whose virile
personality dominated his century, remained to the
end of his career a saddened, disappointed man,

hampered by the melancholy faculty of creating a
void about him into which few dared to intrude.
Rubens on the other hand, in spite of the sad cir-
cumstances of his birth and the poverty of his
parents during his boyhood, was endowed from
the first with a happy temperament that won him
friends wherever he went and had much to do
with his success as an artist. In his " Michelangelo,"
Mr. Davies, though he says his aim has been
merely to sketch in a concise form the life of the
master through his works, well brings out the
aloofness of the man who dwelt alone with his
thought and his labour in a pathetic solitude, his
eighteen years' friendship with Vittoria Colonna,
that was only cut short by her death, having been
the one ray of sunshine to lighten his existence.
Strange to say, however, the critic does not dwell
on the great artist's strong affection for Tommaso
Cavalieri, to whom he addressed letters and sonnets
full of a passion rarely felt by one man for another,
neither does he make any attempt to define the in-
fluence of Michael Angelo upon his contemporaries
and successors. For all that, the book, which is
enriched with reproductions of many typical
paintings and sculptures and contains several
valuable appendices, is a notable contribution to
Renaissance literature, realising forcibly the stupen-
dous individuality of a truly creative genius.

The "Rubens" of Mr. Dillon presents to the
" Michelangelo" of Mr. Davies almost as great a
contrast as does the work of the two artists. He
passes in brief and rapid review the life of the
painter, carefully refraining, as far as possible, from
any critical examination of his work, but at the same
time bringing out clearly the influence on him of
the political, religious and social life of his time, as
well as the unremitting devotion to his country,
that from first to last distinguished him. The deeply
interesting narrative of a life exceptionally full of
dramatic incidents, is succeeded by an analysis
of the aesthetic qualities of Rubens that are ably
compared with those of his contemporaries; but
the bulk of the volume is occupied by an exhaustive
list of the works produced in fifty years of un-
broken activity, and black-and-white reproductions
of no less than 484 of the most important.

Modern Cabinet Work, Furniture and Fitments.
By Percy A. Wells and John Hooper. (London:
B. T. Batsford.) 12^. 6d. net.—It would be no
exaggeration to say that this is the most thorough
and systematic exposition of the processes and
materials employed in modern cabinet-making
which has yet appeared—and the term " cabinet-
making," we are reminded, covers a much wider