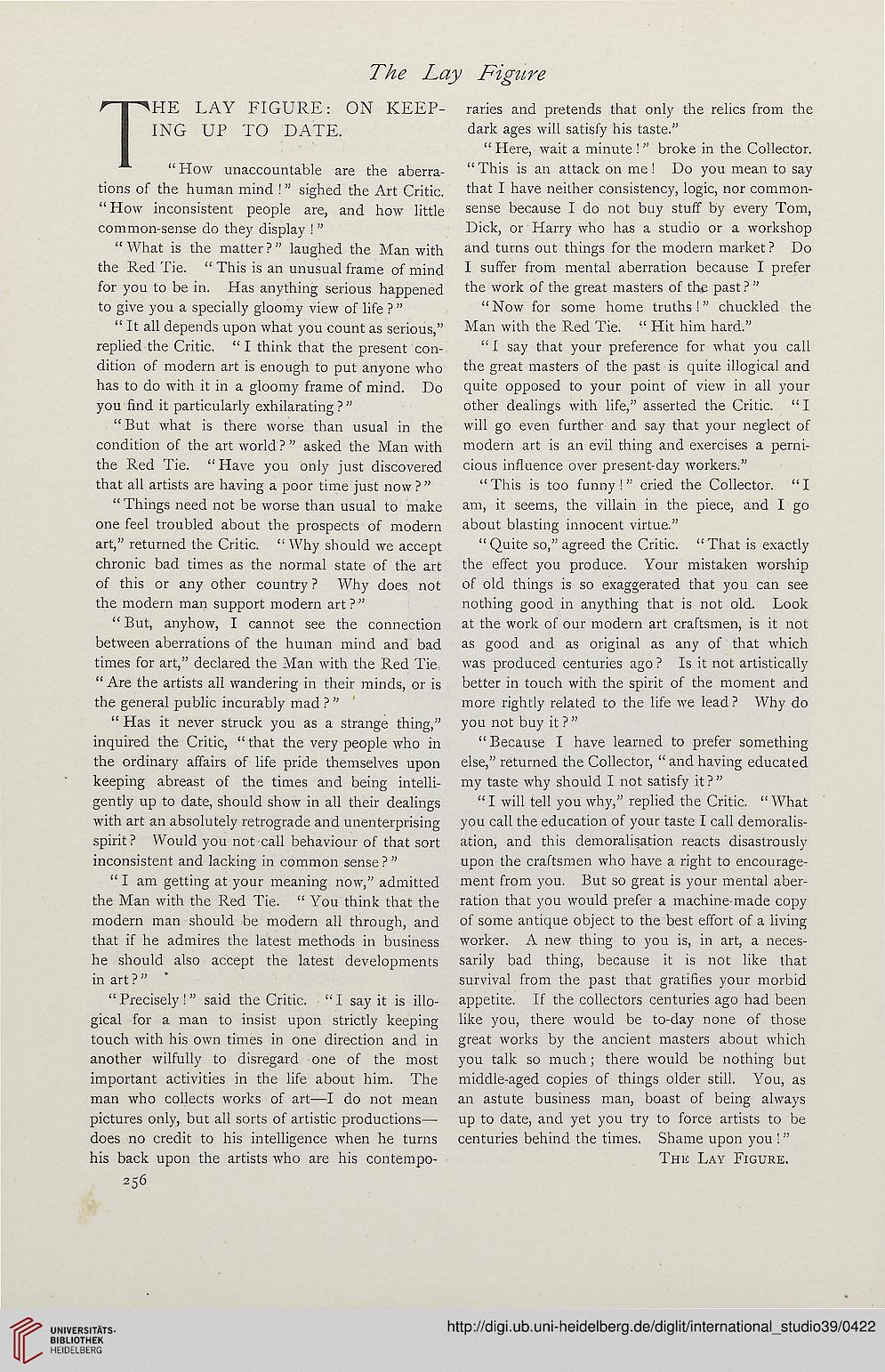 THE LAY FIGURE: ON KEEP- raries and pretends that only the relics from the

ING UP TO DATE. dark ages will satisfy his taste."
" Here, wait a minute ! " broke in the Collector.

"How unaccountable are the aberra- "This is an attack on me ! Do you mean to say

tions of the human mind !" sighed the Art Critic. that I have neither consistency, logic, nor common-

"How inconsistent people are, and how little sense because I do not buy stuff by every Tom,

common-sense do they display ! " Dick, or Harry who has a studio or a workshop

"What is the matter?" laughed the Man with and turns out things for the modern market? Do

the Red Tie. " This is an unusual frame of mind I suffer from mental aberration because I prefer

for you to be in. Has anything serious happened the work of the great masters of the past?"

to give you a specially gloomy view of life ? " " Now for some home truths ! " chuckled the

" It all depends upon what you count as serious," Man with the Red Tie. " Hit him hard."

replied the Critic. " I think that the present con- " I say that your preference for what you call

has to do with it in a gloomy frame of mind. Do quite opposed to your point of view in all your

you find it particularly exhilarating?" other dealings with life," asserted the Critic. "I

condition of the art world ? " asked the Man with modern art is an evil thing and exercises a perni-

the Red Tie. "Have you only just discovered cious influence over present-day workers."

that all artists are having a poor time just now ? " "This is too funny!" cried the Collector. "I

" Things need not be worse than usual to make am, it seems, the villain in the piece, and I go

one feel troubled about the prospects of modern about blasting innocent virtue."

chronic bad times as the normal state of the art the effect you produce. Your mistaken worship

of this or any other country ? Why does not of old things is so exaggerated that you can see

the modern man support modern art ?" nothing good in anything that is not old. Look

" But, anyhow, I cannot see the connection at the work of our modern art craftsmen, is it not

times for art," declared the Man with the Red Tie, was produced centuries ago ? Is it not artistically

" Are the artists all wandering in their minds, or is better in touch with the spirit of the moment and

the general public incurably mad?" more rightly related to the life we lead? Why do

"Has it never struck you as a strange thing," you not buy it?"

inquired the Critic, "that the very people who in "Because I have learned to prefer something

the ordinary affairs of life pride themselves upon else," returned the Collector, " and having educated

keeping abreast of the times and being intelli- my taste why should I not satisfy it ?"

gently up to date, should show in all their dealings "I will tell you why," replied the Critic. "What

spirit? Would you not call behaviour of that sort ation, and this demoralisation reacts disastrously

inconsistent and lacking in common sense ? " upon the craftsmen who have a right to encourage-

" I am getting at your meaning now," admitted ment from you. But so great is your mental aber-

the Man with the Red Tie. " You think that the ration that you would prefer a machine-made copy

modern man should be modern all through, and of some antique object to the best effort of a living

that if he admires the latest methods in business worker. A new thing to you is, in art, a neces-

he should also accept the latest developments sarily bad thing, because it is not like that

in art?" " survival from the past that gratifies your morbid

"Precisely!" said the Critic. "I say it is illo- appetite. If the collectors centuries ago had been

gical for a man to insist upon strictly keeping like you, there would be to-day none of those

another wilfully to disregard one of the most you talk so much; there would be nothing but

important activities in the life about him. The middle-aged copies of things older still. You, as

man who collects works of art—I do not mean an astute business man, boast of being always

pictures only, but all sorts of artistic productions— up to date, and yet you try to force artists to be

does no credit to his intelligence when he turns centuries behind the times. Shame upon you !"

his back upon the artists who are his contempo- The Lay Figure.
256