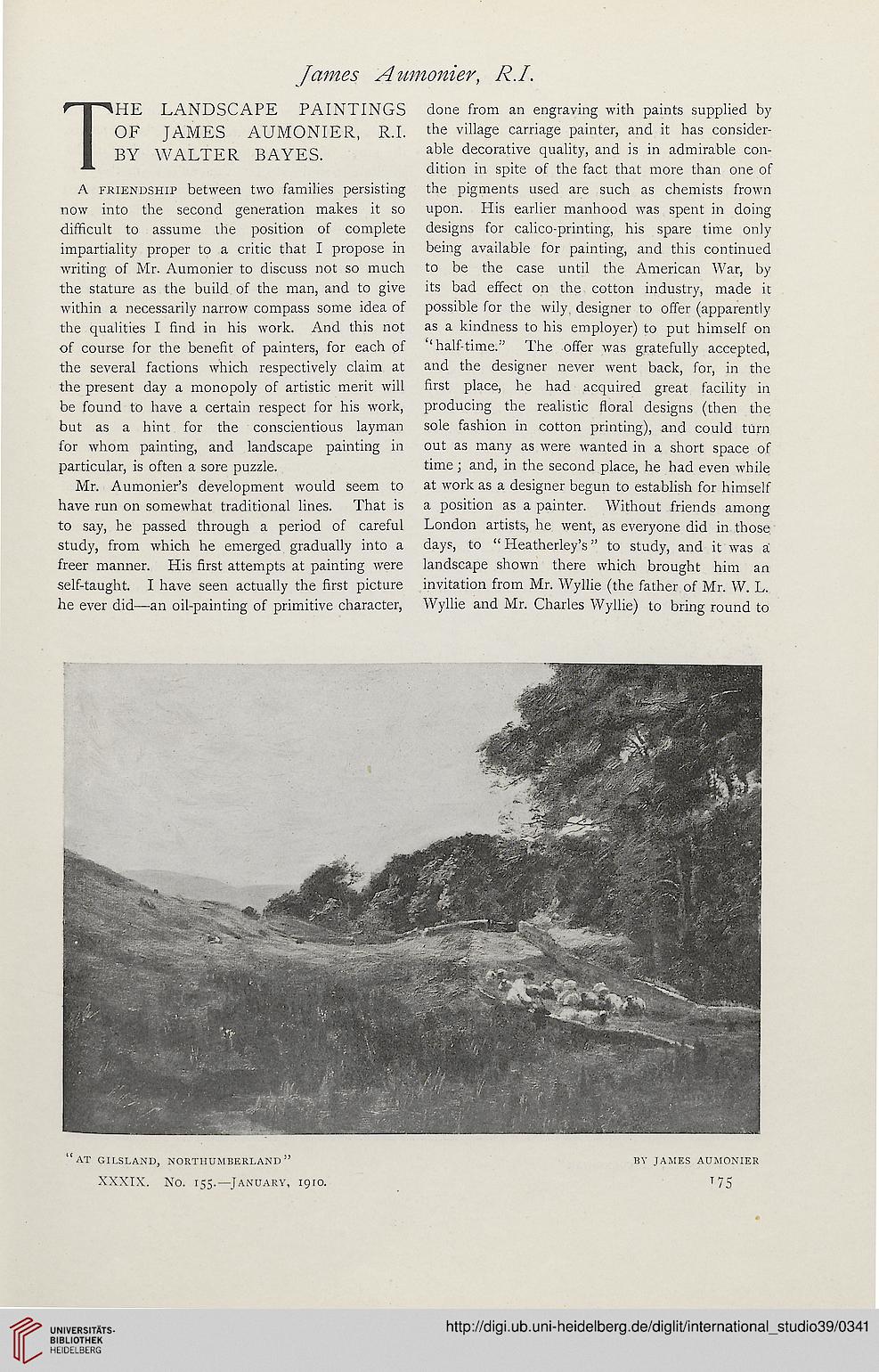 THE LANDSCAPE PAINTINGS done from an engraving with paints supplied by

OF JAMES AUMONIER, R.I. tne village carriage painter, and it has consider-

BY WALTER BAYES a^e decorative quality, and is in admirable con-
dition in spite of the fact that more than one of

now into the second generation makes it so upon. His earlier manhood was spent in doing

difficult to assume the position of complete designs for calico-printing, his spare time only

impartiality proper to a critic that I propose in being available for painting, and this continued

writing of Mr. Aumonier to discuss not so much to be the case until the American War, by

the stature as the build of the man, and to give its bad effect on the cotton industry, made it

within a necessarily narrow compass some idea of possible for the wily, designer to offer (apparently

the qualities I find in his work. And this not as a kindness to his employer) to put himself on

of course for the benefit of painters, for each of 'half-time.' The offer was gratefully accepted,

the several factions which respectively claim at and the designer never went back, for, in the

the present day a monopoly of artistic merit will first place, he had acquired great facility in

be found to have a certain respect for his work, producing the realistic floral designs (then the

but as a hint for the conscientious layman sole fashion in cotton printing), and could turn

for whom painting, and landscape painting in out as many as were wanted in a short space of

particular, is often a sore puzzle. time ; and, in the second place, he had even while

Mr. Aumonier's development would seem to at work as a designer begun to establish for himself

have run on somewhat traditional lines. That is a position as a painter. Without friends among

to say, he passed through a period of careful London artists, he went, as everyone did in those

study, from which he emerged gradually into a days, to " Heatherley's" to study, and it was a

freer manner. His first attempts at painting were landscape shown there which brought him an

self-taught. I have seen actually the first picture invitation from Mr. Wyllie (the father of Mr. W. L.

he ever did—an oil-painting of primitive character, Wyllie and Mr. Charles Wyllie) to bring round to