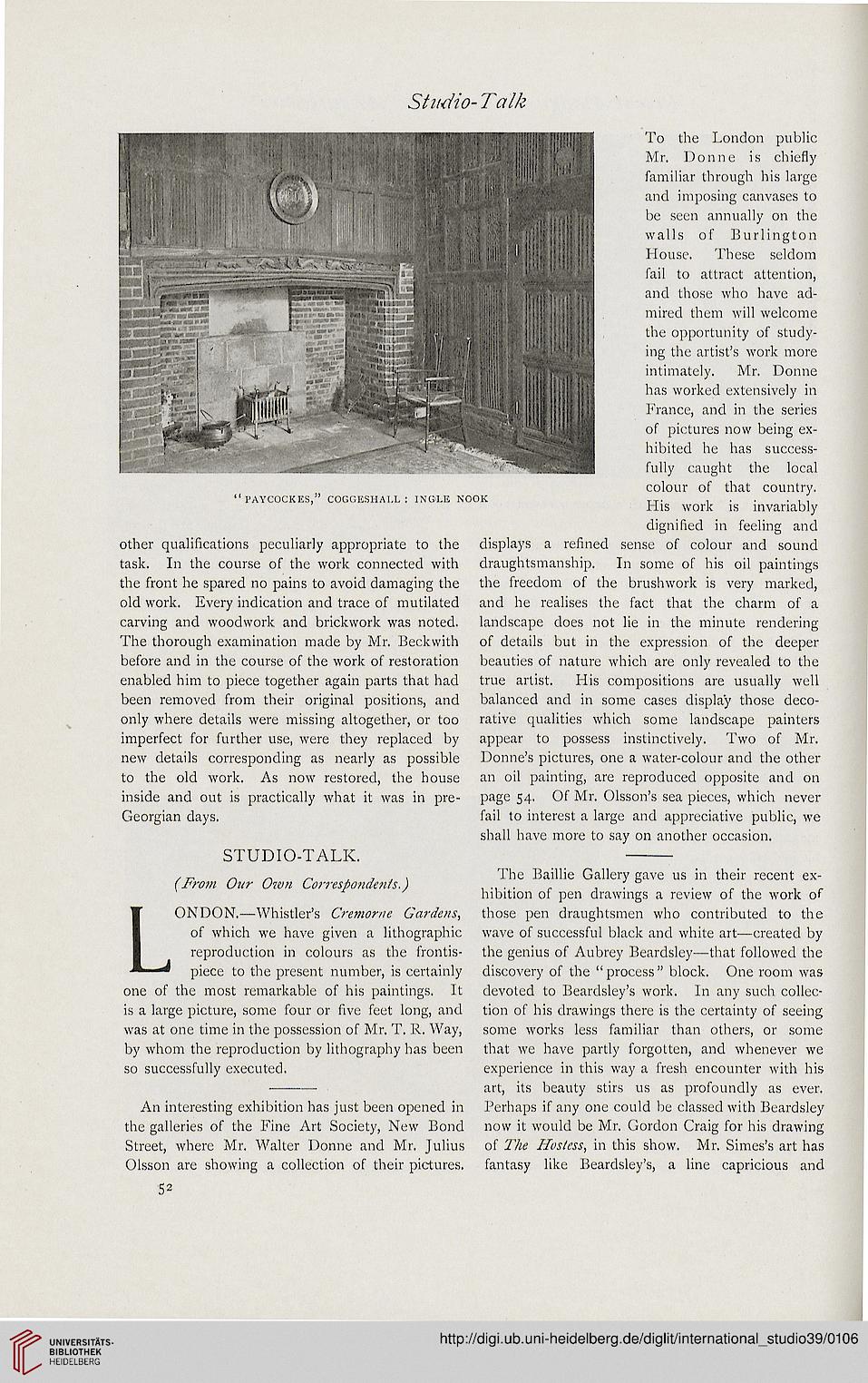 To the London public
Mr. Donne is chiefly
familiar through his large
and imposing canvases to
be seen annually on the
walls of Burlington
House. These seldom
fail to attract attention,
and those who have ad-
mired them will welcome
the opportunity of study-
ing the artist's work more
intimately. Mr. Donne
has worked extensively in
France, and in the series
of pictures now being ex-
hibited he has success-
fully caught the local
colour of that country.

llis work is invariably
dignified in feeling and

task. In the course of the work connected with draughtsmanship. In some of his oil paintings

the front he spared no pains to avoid damaging the the freedom of the brushwork is very marked,

old work. Every indication and trace of mutilated and he realises the fact that the charm of a

carving and woodwork and brickwork was noted. landscape does not lie in the minute rendering

The thorough examination made by Mr. Beckwith of details but in the expression of the deeper

enabled him to piece together again parts that had true artist. His compositions are usually well

been removed from their original positions, and balanced and in some cases display those deco-

only where details were missing altogether, or too rative qualities which some landscape painters

imperfect for further use, were they replaced by appear to possess instinctively. Two of Mr.

new details corresponding as nearly as possible Donne's pictures, one a water-colour and the other

to the old work. As now restored, the house an oil painting, are reproduced opposite and on

inside and out is practically what it was in pre- page 54. Of Mr. Olsson's sea pieces, which never

Georgian days. fail to interest a large and appreciative public, we

shall have more to say on another occasion.

hibition ot pen drawings a review of the work of

LONDON.—Whistler's Cremornc Gardens, those pen draughtsmen who contributed to the

piece to the present number, is certainly discovery of the " process " block. One room was

one of the most remarkable of his paintings. It devoted to Beardsley's work. In any such collec-

is a large picture, some four or five feet long, and tion of his drawings there is the certainty of seeing

was at one time in the possession of Mr. T. R, Way, some works less familiar than others, or some

by whom the reproduction by lithography has been that we have partly forgotten, and whenever we

so successfully executed. experience in this way a fresh encounter with his

-- art, its beauty stirs us as profoundly as ever.

the galleries of the Fine Art Society, New Bond now it would be Mr. Gordon Craig for his drawing

Street, where Mr. Walter Donne and Mr. Julius of The Hostess, in this show. Mr. Simes's art has

Olsson are showing a collection of their pictures, fantasy like Beardsley's, a line capricious and