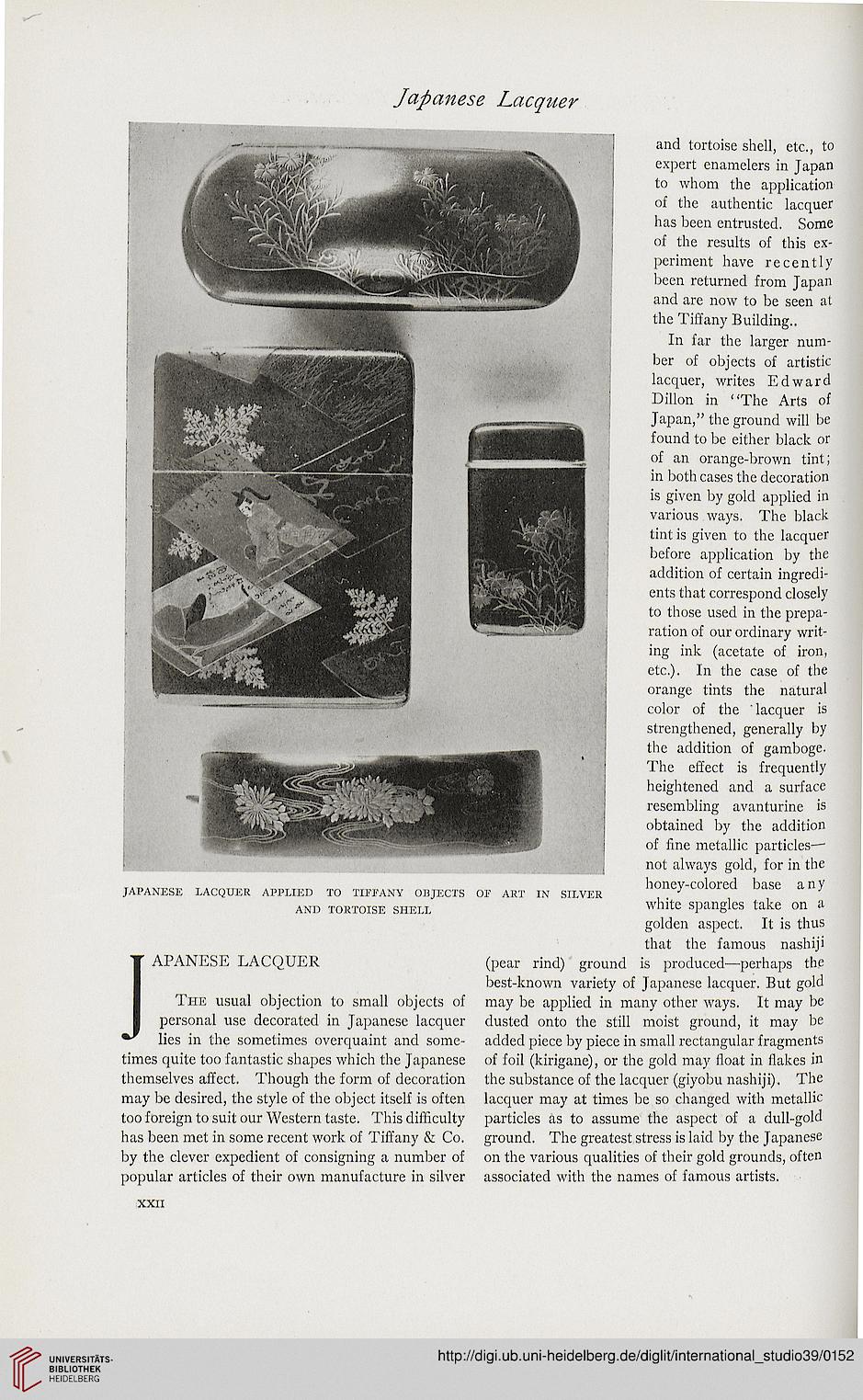 and tortoise shell, etc., to
expert cnamclers in Japan
to whom the application
of the authentic lacquer
has been entrusted. Some
of the results of this ex-
periment have recently
been returned from Japan
and are now to be seen at
the Tiffany Building..

In far the larger num-
ber of objects of artistic
lacquer, writes Edward
Dillon in "The Arts of
Japan," the ground will be
found to be either black or
of an orange-brown tint;
in both cases the decoration
is given by gold applied in
various ways. The black
tint is given to the lacquer
before application by the
addition of certain ingredi-
ents that correspond closely
to those used in the prepa-
ration of our ordinary writ-
ing ink (acetate of iron,
etc.). In the case of the
orange tints the natural
color of the lacquer is
strengthened, generally by
the addition of gamboge.
The effect is frequently
heightened and a surface
resembling avanturine is
obtained by the addition
of fine metallic particles-—
not always gold, for in the
honey-colored base any
white spangles take on 8
golden aspect. It is thus
that the famous nashiji

best-known variety of Japanese lacquer. But gold
The usual objection to small objects of may be applied in many other ways. It may be
personal use decorated in Japanese lacquer dusted onto the still moist ground, it may be
lies in the sometimes overquaint and some- added piece by piece in small rectangular fragments
times quite too fantastic shapes which the Japanese of foil (kirigane), or the gold may float in flakes in
themselves affect. Though the form of decoration the substance of the lacquer (giyobu nashiji). The
may be desired, the style of the object itself is often lacquer may at times be so changed with metallic
too foreign to suit our Western taste. This difficulty particles as to assume the aspect of a dull-gold
has been met in some recent work of Tiffany & Co. ground. The greatest stress is laid by the Japanese
by the clever expedient of consigning a number of on the various qualities of their gold grounds, often
popular articles of their own manufacture in silver associated with the names of famous artists.